Our oceans are fraught with dangers, from impenetrable fog to errant icebergs. They are vast, frigid, and foreboding, and so few tragedies quite capture the public imagination the way shipwrecks do. Here are 24 titanic facts about shipwrecks.

Without a doubt, the most famous shipwreck of all time is the sinking of the Titanic. The story of the disaster has been told in countless books and no fewer than five movies. It has also inspired stage shows, visual art, manga, and a museum exhibit in landlocked Branson, Missouri.

Of all the literature associated with the Titanic, the strangest must surely be the novel written before the ship was even built. Morgan Robertson’s 1898 novel Futility tells the story of a ship, the SS Titan, which is similar to the Titanic in construction and said to be unsinkable; in the story, the ship sinks and hundreds drown due to a lack of lifeboats.

The Titanic might have just been plain old bad luck. The ship that rescued the survivors of the Titanic disaster, the Carpathia, however, was itself sunk by a German U-boat during World War I.

Famous though it is, the Titanic is not the deadliest shipwreck of all time. The Dona Paz holds that dubious distinction. In 1987, the Filipino ferry collided with an oil tanker, resulting in a massive fire that sunk the ship and took an estimated 4,386 lives. Only 24 people survived.

The Lusitania, tasked with ferrying passengers and cargo across the Atlantic, was sunk by a German U-boat in 1915. The deaths of 128 American passengers caused enough outrage to draw the US into World War I two years later.

The Skeleton Coast, an arid stretch of Namibian shoreline, has been the final stop of many a doomed ship. The coast is covered with the bones of an enormous sea animal graveyard, which is where it gets its name.

17. The Graveyard of the Atlantic

The eastern coast of North Carolina is also noted for its shipwrecking habit. It is host to over a thousand shipwrecks, everything from pre-18th century Spanish ships to Civil War-era submarines.

The thick fogs off the coast of Newfoundland are particularly treacherous for ships, and no shipwreck struck the hearts of Newfoundlanders like the wreck of Florizel. The ship, owned by Bowring Brothers, ran aground near Cappahayden, Newfoundland in 1918, killing 94. Among those lost was Betty Munn, the three-year-old daughter of a manager at Bowring Brothers. She is memorialized with a statue of Peter Pan in St. John’s, Newfoundland’s Bowring Park.

In 1975, the carrier SS Edmund Fitzgerald went down in a storm on Lake Superior. The tragedy immediately caught the attention of songwriter Gordon Lightfoot. Though rife with inaccuracies, “The Wreck of the Edmund Fitzgerald” hit number one on the Canadian charts and number two on Billboard Hot 100 only a year later.

A researcher at National Oceanic and Atmospheric Administration estimated that there are 1 million shipwrecks undersea at this very moment, while UNESCO actually says that number may be as high as 3 million.

One UNESCO researcher, based on this number of shipwrecks, argues that there is more that £35 billion ($48.6 billion in US dollars) in treasure in these wrecks. But don’t get your snorkel on yet: most of that money is out of our reach.

The Arizona was one of the US battleships sunk in the attack on Pearl Harbor in 1942. It was declared a national shrine in 1962. For more than 70 years, the Arizona has been slowly leaking oil into Pearl Harbor at a rate of 2.18 litres every day. Members of the navy and the National Parks Service have been working to find a way to patch the leak while also respecting the site.

Some notable flotsam (now you know what that word really means!) that has washed up over the years: thousands of bananas, dozens of fly swatters, and even a BMW motorbike.

There have, perhaps, been more lavish gifts, but in 2017, Canada was delighted to receive two shipwrecks from the British government. Explorer John Franklin and his crew perished while searching for the Northwest Passage. A significant part of Canadian history and lore, the British government granted Canada the rights to claim his ships Erebus and Terror.

One tragedy in 1917 caused destruction far beyond one shipwreck. The Mont-Blanc was carrying a variety of explosives when it collided with the Imo. The Mont-Blanc caught fire, causing an explosion that levelled Halifax, Nova Scotia and cost 2,000 lives. It was the largest man-made explosion until the dropping of the atomic bomb.

The Exxon Valdez ran aground at Prince William Sound, Alaska, in 1989, leading to an oil spill of up to 750,000 barrels. The spill caused a huge uproar, and Exxon was forced to pay more than $5 billion dollars in lawsuits and punitive damages. The ship wasn’t retired until 2012.

When a shipwreck happens, we often think of the calls “Women and children first!” This is also called the Birkenhead Drill, and guess what? It pretty much never happens. It’s only happened twice in famed cases: on the Birkenhead (where it gets its name) and, yes, on the Titanic. Today, vulnerable people like the elderly or disabled (and children) are prioritized.

Not all shipwrecks are accidents. Some wrecks are purposefully sunk in order to promote coral reefs and sea life.

Well, why don’t we just sink a bunch of old ships then? Not so fast. A recent study suggested that the coral that grows on these man-made shipwreck reefs is actually inimical to native coral species.

There are always ways to turn a negative into a positive. Take shipwrecks for example: while maritime law recognizes the ship itself as property of the original owner, cargo is considered fair game in many legal systems. Keep your eyes peeled, then, for a shipwreck—you never know what might be on board.

For example, take the case of Tommy Thompson. In 1988, he and a team tracked down the wreck of the SS Central America, a ship that went down in 1857 carrying 30,000 pounds of gold. Almost immediately after the find was announced, several insurance companies came forward with claims of ownership to the wreck. By the time the smoke cleared, however, Thompson had disappeared, leaving several creditors in his wake (though he was later located and arrested in 2015).

Unsinkable Sam was one lucky cat. When sailors of the Cossack found the cat floating in the wreck of the Bismarck during World War II, they rescued Sam and made him the mascot of their ship. Not long after, however, the Cossack itself was sunk and the crew, including Sam, were transferred. The trend continued, and, all told, Sam survived three different shipwrecks.

While the Italian cruise ship the Costa Concordia was sinking in 2012, you could actually hear the song “My Heart Will Go On” from the 1997 movie Titanic playing in the ship’s restaurant. 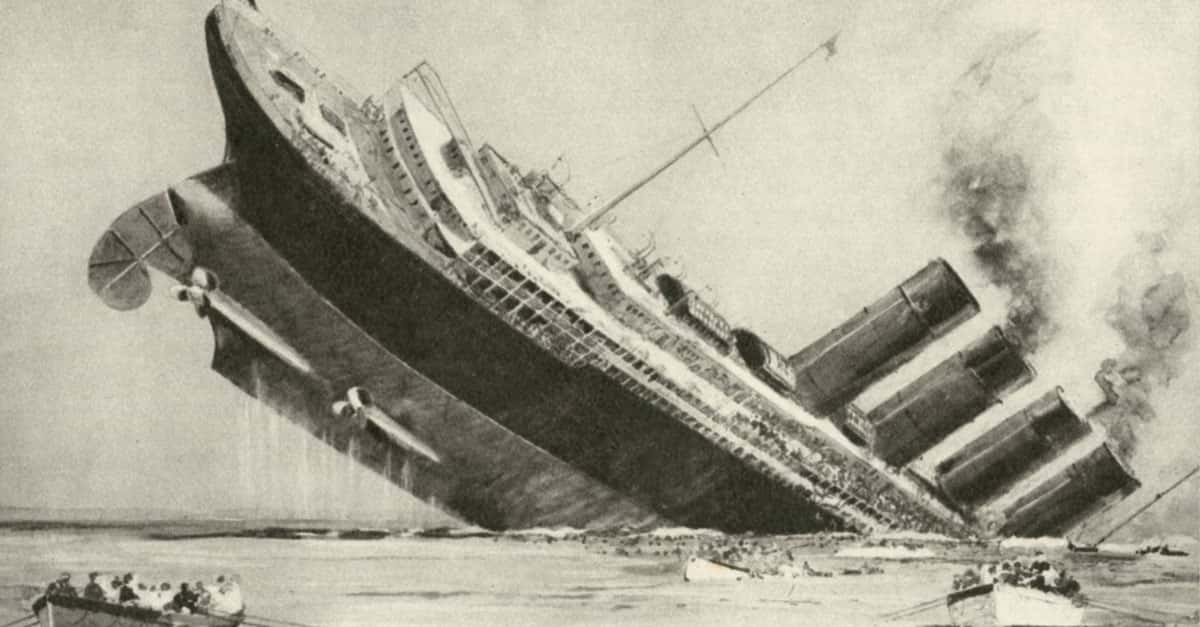 40 Catastrophic Facts About The Lusitania