Courteney Cox is best known for her role as Monica Geller in the 90s hit sitcom Friends. Not content to have just one iconic piece of pop culture under her belt, she also went on to star in the Scream franchise. Cox will always be there for you, provided you’re willing to just keep binge watching Friends on Netflix. Here are 25 friendly facts about Courteney Cox.

Cox dated Counting Crows member Adam Durtiz. While they dated Durtiz wrote a song for his famous girlfriend: “Monkey” off of the album Recovering Satellites.

Cox was originally offered the role of Rachel on friends, but she actually wanted to play Monica instead. I think we can all agree that the decision was the right one. I can’t imagine a world where Jennifer Aniston didn’t play Rachel.

In 1995, People magazine named Cox one of the 50 most beautiful people in the world. Good to see they noticed too.

While checking out other careers that start with the letter A, Cox studied architecture for a year at Mount Vernon college. Maybe she was starting to look for jobs with the letter ‘A’ and if none of them stuck she’d have moved on to ‘B.’

Cox was the first person to say the word “period” on American television. She said it in a Tampax commercial, you know, the kind of commercial you’d expect to have already said that word long, long ago.

After she married David Arquette, Cox announced that she changed her name to Courteney Cox Arquette. As a playful joke, the cast and crew added Arquette to everyone’s last names in the opening credits of the season six premiere of Friends.

Cox isn’t just a gifted actress, she’s also something of a musician. She can play both the piano and the drums.

As something of a hobby, Cox likes to flip houses. That is that she buys them, renovates them, and sells them for a profit. Not that she needs the money, right?

11. Working With The Boss

Cox appeared in the 1984 music video for Bruce Springsteen’s “Dancing in the Dark.” She played the girl pulled from the crowd who got to dance on stage with Springsteen. In other words, she lived the dream.

Her daughter, Coco Arquette, got her name as sort of a compromise between her mom and dad. Cox wanted to name her daughter Courteney, after not only herself but her mother as well. You see, her mother is also a Courteney. However, Arquette is Jewish and in the Jewish tradition, you can’t name a child after a living person.

So the pair found a way to make both traditions happy. Rather than name her Courteney, they used Courteney’s mother’s nickname: Coco.

Cox, along with husband David Arquette and actress Neve Campbell, are the only actors that appear in all four of the Scream movies.

Cox is the only Friends cast member who didn’t receive an Emmy or Golden Globe nomination for her role on the show. The first time she got nominated for a Golden Globe was for Cougar Town.

When Natalee Holloway’s shocking disappearance made national news in 2005, Cox donated reward money to the investigation. She and Holloway attended the same high school (though not at the same time, obviously.)

Cox and Arquette first appeared together on screen in an episode of Friends, not in one of the Scream movies. The episode aired October 3, 1996 while Scream didn’t come out until December. Arquette was in the episode “The One With the Jam” where his character accidentally stalks Phoebe. While he and his future wife were co-stars, they were not actually dating at the time.

Cox was the inspiration for one of the 90s’ most beloved dances: the Carlton from The Fresh Prince of Bel-Air. The iconic dance was an exaggerated parody of the way Cox danced in Bruce Springsteen’s “Dancing in the Dark” music video. This music video was such a great source of comedy that when the actress hosted Saturday Night Live in 1995, she made fun of it in a sketch where Adam Sandler played Springsteen.

During the run of Friends, Cox was the highest paid TV actress of the time, sharing that title with co-stars Jennifer Anniston and Lisa Kudrow. During the last two years that Friends was on air, each actress pulled down a respective (and whopping) one million dollars per episode.

Cox was born and raised in the suburbs of Birmingham, Alabama.

According to Friends co-creator Marta Kauffman, Cox had a lot in common with Monica. Apparently she was known for being something of a neat freak on the set of Friends. Her dressing room was always very neat and clean, but more than that, Kauffman told the Los Angeles Times that Cox would also clean the other actor’s dressing rooms. Apparently if they were too messy, she just wouldn’t go inside!

Cox had a place on the Friends set where she would store junk food to snack on. The place was charmingly called “Courteney’s Candy Cabinet.” Her favorite little treats from the cabinet were Butterfingers.

In the series finale of the FX show Dirt, Cox made out with another one of her Friends co-stars. This time, she kissed Jennifer Aniston, who of course played Rachel Green.

Cox almost didn’t get her second-most famous role as Gale Weathers in the Scream franchise. The producers of Scream just couldn’t see her playing a mean girl when they were so used to seeing friendly Monica Geller. Cox didn’t let up on the role until they hired her though, and the rest is horror movie history. 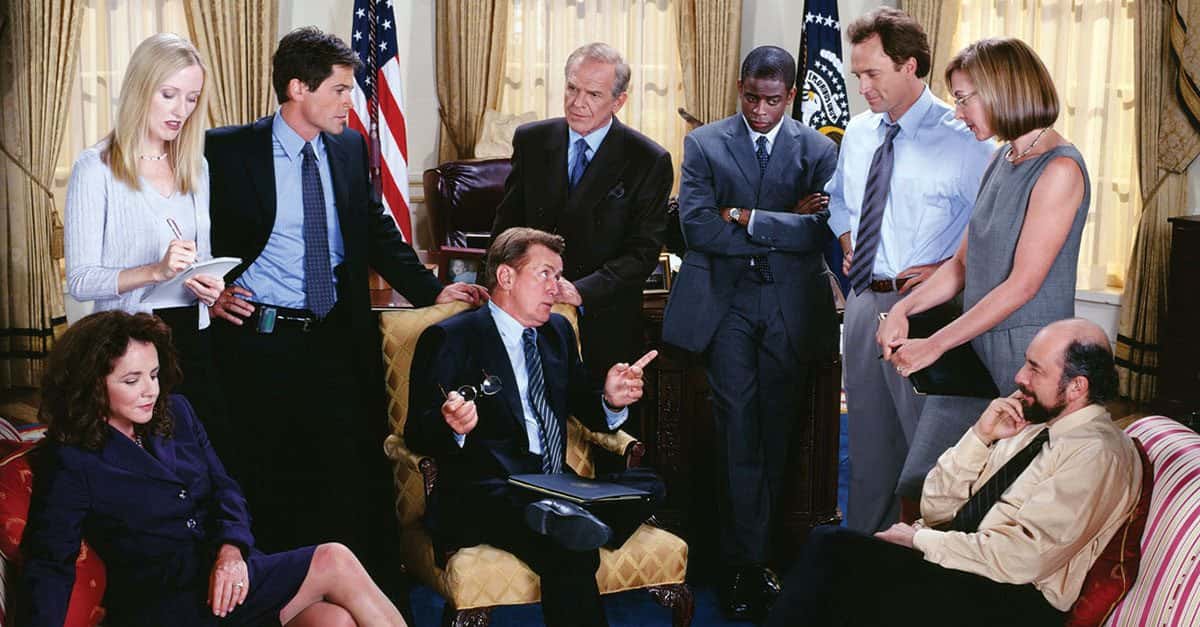 “For America!” Facts About The West Wing