“Life is one big road with lots of signs. So when you riding through the ruts, don’t complicate your mind. Flee from hate, mischief and jealousy. Don’t bury your thoughts, put your vision to reality. Wake Up and Live!”

From the moment he started out in 1963 with the Wailers, Bob Marley forged a singular songwriting style that resonated with audiences around the world. Here are 24 chilled facts about Bob Marley.

Bob Marley was born in Jamaica. His mother was only 18 when he was born, and his father was a white Englishman who was already well into his late 60s. Marley’s father did not spend any time with the family, but financially supported them.

His mother raised him to be a Catholic, but once he got older, he became Rastafari, which is a religion that originated in Jamaica.

Rastafari do not believe in cutting their hair, and they believe in healthy eating and generally not altering your body’s natural state. This is why Bob Marley started styling his hair in dreadlocks. He made the hairstyle popular all over the world.

Since his father was white, and because his skin was paler than some of his friends, Bob Marley was called “white” by his classmates. Throughout his life, he was quoted saying that the color of your skin doesn’t matter, and it is far more important what kind of person you are. As he said, “Me don’t dip on nobody’s side. Me don’t dip on the black man’s side, not the white man’s side. Me dip on God’s side.”

When he was a little kid, he would read people’s palms to tell them their futures. He was eerily good at it, giving people very accurate predictions.

In 1976, Rolling Stone magazine voted him (and his band) the “Best Band of the Year.”

He married  Alpharita Constantia Anderson, and they had three kids together. She also had children from a previous marriage. In total, Bob Marley is the father of 11 children.

Bob Marley loved playing soccer so much that he was quoted as saying, “Football is freedom, a whole universe.”  While on tour, the crew would play soccer before or after soundcheck. They used to play a game called “Money Ball” where they would juggle a soccer in their hotel suite, and if anyone broke anything, they would have to pay for it.

When he played football, friends claimed that he was just as good as someone on the professional Brazilian team. Everyone called him “Skipper” because once he began dribbling the ball with his feet, there was no way to get it away from him.

Bob Marley was a Rastafarian, which is a religion prominently practiced in Jamaica. His beliefs had a huge influence on his music. Many people say that without Marley, Rastafari would have never spread to the United States.

Bob Marley was very honest about the fact that he smoked a lot of “herb.” His music and his image became associated with stoner culture. The Jamaican colors and posters of his face are still plastered across college dorms to this day.

Marley wasn’t supportive of weed for recreational use. He used it to meditate, and encouraged others to do the same. “Instead a get foolish, you sit down and you can meditate and be someone. Rum teach you to be a drunkard, and herb teach you to be someone.”

He believed in the unity of all African people, regardless of whatever country they came from.

Originally, his band’s name was called The Teenagers, and after testing out a few names for a while, they called themselves The Wailers.

In 1966, he moved to Delaware in the USA to be with his mother. He worked for DuPont as a a lab assistant, and was also an assembly line worker at the Chrysler plant on his second visit in 1969.

One of his most popular songs is “No Woman No Cry”; it made it to Rolling Stone’s top 500 songs of all time.

8. Turn the Radio Up

February became National Reggae Month in Jamaica in his honor.

In 1976, a gang attempted to assassinate Bob Marley. Don Taylor, his manager, may have saved Bob’s life: when the seven gunmen burst into Bob’s home, Don stepped in front of Bob. Don was critically injured. In fact, he was nearly pronounced dead upon arrival at the hospital, until a doctor examined him more closely. He was then flown to Miami, where surgeons removed a bullet from his spine.

There is a life-sized statue of Bob Marley in Ethiopia.

In 1978, the United Nations gave him the Peace Medal of the Third World for all of his work being a voice of political justice for Jamaica and the African people. In his acceptance speech, he talked about Rastafari and said, “You need to listen to God.”

In 1977, there was a tumor found under one of his toe nails. He refused to have it amputated, and it ended up spreading throughout his body. When Bob died in 1981, they buried him with a soccer ball, a stalk of herb, and the ring he was given by the Crown Prince of Ethiopia.

On his deathbed, Bob Marley told his son, “Money can’t buy life.” His final words were “On your way up, take me up. On your way down, don’t let me down.”

In 1981, he was given the award of “Jamaican Order of Merit,” which is awarded to someone who has contributed to Jamaican culture. When he died, the Jamaican government gave him an elaborate funeral.

In 2014, Forbes ranked Bob Marley as being one of the richest dead celebrities. Years after his death, his music sales were still high on the charts. 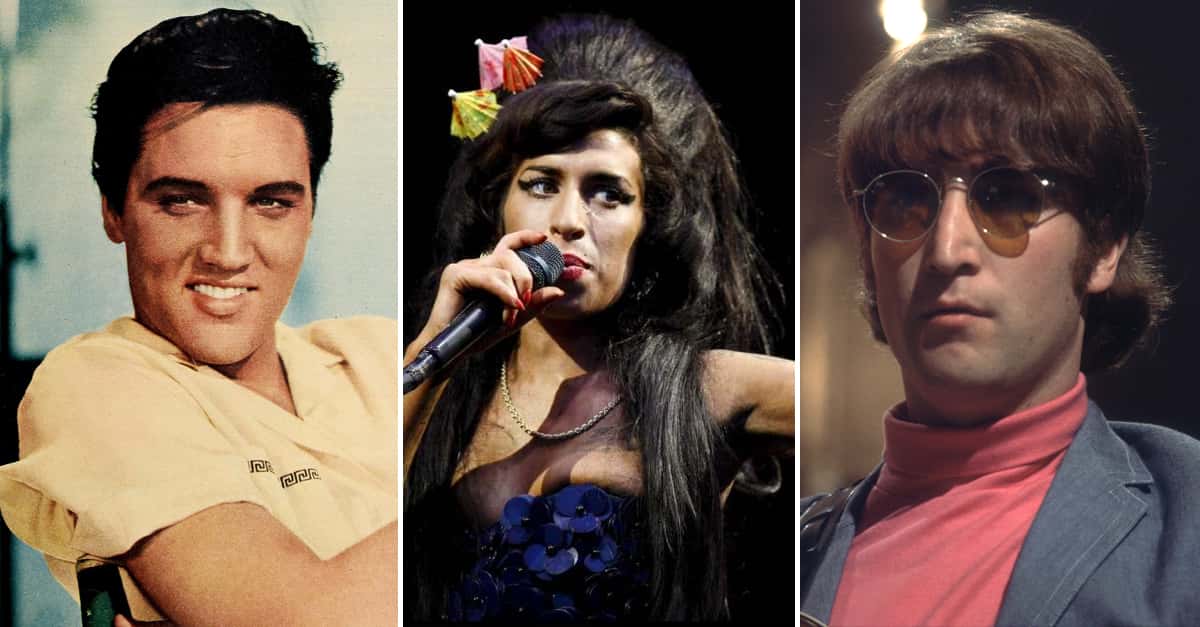 Tragic Facts About Musicians Who Died Too Young