Wild Facts About The Lion King

Wild Facts About The Lion King

“It’s the circle of life, and it moves us all through despair and hope, through faith and love.” – The Lion King

Hakuna Matata! It’s time for some handy-dandy The Lion King facts. Here are some things you may not have known about your favorite pride of lions.

Remember when Mufasa asks Zazu what he should do with Scar? Zazu replies, “He’d make a very handsome throw rug.” Turns out, someone at Disney thought this was a great idea—in 1997’s Hercules, Scar makes a subtle cameo in the form of a throw rug.

In the original storyline, Nala was going to be banished from Pride Rock because for ignoring Scar’s romantic advances. It was during this banishment that she would find Simba alive and well with Timon and Pumbaa. Disney ultimately abandoned this plan.

The original game plan for the hyenas was to reunite Cheech & Chong. Cheech Marin accepted to play Banzai, but Tommy Chong was unavailable. Tommy’s role was changed into a female hyena, Shenzi, who was voiced by Whoopi Goldberg.

Jim Cummings replaced Jeremy Irons for the finale of “Be Prepared.” Irons messed up his voice while performing the line, “You won’t get a sniff without me!” The rest of his recording just didn’t sound powerful enough, so Jim stepped in to save the day.

Rafiki is the only character in the film to not have an American or English accent, and who speaks Swahili from time to time.

During the scene where Simba gets pinned down by Nala, Jonathan Taylor Thomas was actually smacked on the back to make it sound like he had the wind knocked out of him.

In the scene where Mufasa tells Simba about the Great Kings of the Past, you can see Mickey Mouse if you look at the stars in the wide shot.

Nathan Lane (Timon) ad-libbed the line “What do you want me to do, dress in drag and do the hula?” Yes, Nathan. That is precisely what we want you to do.

Liam Neeson was considered for the role of Mufasa.

Unlike the other lions, Scar’s claws are always out in the film.

The opening scene of The Lion King was thought to be so powerful that it was the first time ever Disney chose to use an entire scene as a film trailer.

It took Disney’s CG department a whopping three years to animate the wildebeest scene in the film. They even had to create a whole new program to ensure the animals could run without bumping into one another.

One of the original titles for the film was King of the Jungle, until the folks at Disney figured out that lions don’t live in the jungle. This was clearly pre-Wikipedia.

29. Unique as a snowflake

The Lion King was the first Disney venture to feature an original plot – as in not an adaptation. It had inspirations as all stories do, but it was not directly linked to any other story.

Disney actually used their “team B” to make the The Lion King, because their “team A” was busy making Pocahontas – which was slated to be a more successful production. As it turned out, the latter received very mixed reviews and was not nearly as profitable as The Lion King.

Originally, the film did not feature the iconic song “Hakuna Matata”, it instead had a song about eating insects called “He’s Got It All Worked Out.” Alas, a song about bugs was a tough sell to the rest of the team, so they went with “Hakuna Matata” – which was based on a phrase Disney’s research team brought back from Africa.

25. Rafiki is not quite a real animal

The character Rafiki is a bit of a cross between a mandrill and a baboon. He bears most of his resemblance with a mandrill, except mandrills don’t have tails – this was a trait borrowed from the baboons by the Disney animators.

A yellow insect Timon finds under a log has Mickey ears on its back. Don’t you love finding these things?

23. Jeremy Irons blew the animators away

The Disney animators were so impressed with Jeremy Irons’ performance as Scar that they incorporated his features into the character’s appearance.

The Lion King is the first Disney venture to be dubbed into Zulu for its release in Africa.

This film was initially much darker than the final version. Originally, Simba loses to Scar in the final scene, with Scar then dying in the fire. Yowza, that’s too moody for us.

The reason Scar and Mufasa look so different is due to the fact that Disney originally planned for them to not be related. Scar was just some outsider lion, who came in to stir things up.

19. All about the Benjamins

Disney reportedly made over $1 billion off The Lion King merchandise in 1994. Not too shabby!

This is the only Disney film to show a villain (Scar, of course) committing murder. Usually, characters are killed off-screen.

A team of animators was sent to Africa to study the nature and animal behaviour before starting on the production. A lion and a cub were even brought to the studio for life drawing to ensure accuracy.

Originally, Mufasa was not supposed to return after his death, but Simba needed a reason to return to Pride Rock – hence the “apparition” of his father.

14. Strangers in the hall

Despite sharing many scenes, Matthew Broderick (Simba) and Nathan Lane (Timon) only saw each other once during the entire production of the film – and it was in the hall! Both actors did their voice recording separately.

13. Too sad for children

Mufasa’s death is obviously a very intense scene to watch as a child and arguably one of the most traumatic moments in Disney’s animation history. Yet, the scene of his death was initially even more sad, but had to be toned down after a test audience of children reacted with extreme sobbing to the original version.

12. Started from the bottom

Pumbaa is the first character in Disney history to display – err, how shall we put this delicately – flatulence. In other words, he’s the first to launch an air biscuit onscreen for team Disney. Go Pumbaa!

11. Reunited and it feels so good

This is the second film to feature the acting talents of James Earl Jones (Mufasa) and Madge Sinclair (Sarabi) as African king and queen. The first time we saw this pair on screen together was in the comedy Coming to America – in which they were the monarchs of a fictional African country.

The Lion King held the record for highest grossing animated film for over a decade, until it was dethroned in 2013 by another Disney feature – Frozen.

This may seem silly now, given how great the film turned out, but originally Disney planned The Lion King to focus on a conflict between lions and baboons. Scar was planned as the leader of the baboons and Rafiki was going to be a cheetah.

8. From hyena to meerkat and warthog

Nathan Lane (Timon) and Ernie Sabella (Pumbaa) originally auditioned for the roles of the hyenas. The team loved their interaction so much, they cast them as Timon and Pumbaa instead.

Despite the name never appearing in the film, Nala’s mother is named Sarafina. The named is in the credits and was used on some of The Lion King’s merchandise.

Adult Simba’s glorious mane was allegedly inspired by the iconic locks of Jon Bon Jovi. Those are some serious rockstar vibes.

5. Not feeling the love tonight

You may have to sit down for this one… Disney initially wanted “Can You Feel the Love Tonight?” to be a duet between Timon and Pumbaa. Elton John naturally protested and the scene was changed – winning the singer an Academy Award.

Disney faced some criticism for ripping off story elements from Kimba the White Lion. Did they “borrow” too much?

Voice actor Frank Welker provided the roars for all the lions in the animated feature. No real lion roars were used in the film, because the creators wanted each animal to have his/her own unique roar.

Disney made some serious modifications when it comes to animal behavior. For example, the hyenas are depicted as dog-like throughout the film, when in reality, the closest relatives to hyenas are mongooses and meerkats. Disney also reversed the hunter-scavenger relationship. In the wild, hyenas actually kill most of the meat they eat, while lions are more likely to scavenge.

1. Who you calling a baboon?

The song that Rafiki sings, “Asante sana, squash banana, wewe nugu mimi hapana,” is often said to be Swahili for “Thank you very much, squash banana, you’re a baboon and I’m not.” 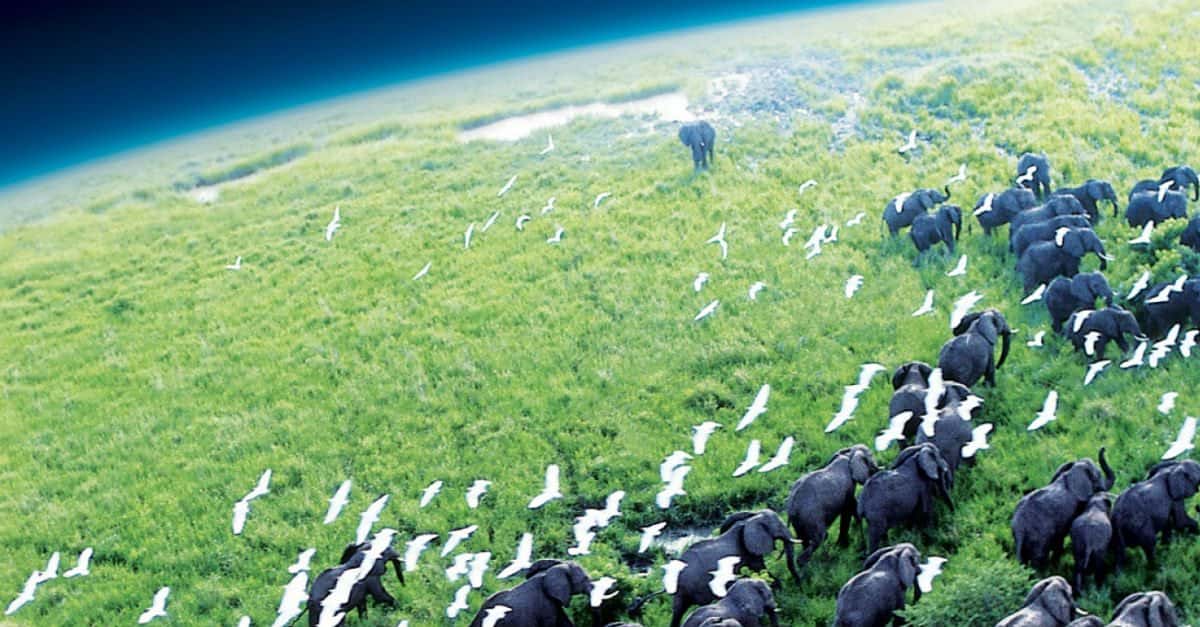 Things You Didn’t Know About The Planet Earth TV Series