The fourth in the Harry Potter film franchise, Harry Potter and the Goblet of Fire found Harry involuntarily selected to compete in a dangerous tournament between three schools of magic. The film was one of the best reviewed installments of the series, praised for its higher level of maturity, sophistication, writing, and performances from its lead actors.

Here are a few things you might not know about the movie that heralded the return of Voldemort.

Harry Potter And The Goblet of Fire Facts

Costume designer Jany Temime believed that Hermione’s dress in the Yule Ball scene was her “Cinderella moment” and the design of the dress was changed several times before they were finally satisfied.

In one of the first takes of Hermione’s “Cinderella Moment,” Emma Watson actually tripped on the dress and fell down the stairs. Who does she think she is? Jennifer Lawrence?

Unaware that Alan Rickman wore black contact lenses for his role as Snape, director Mike Newell complimented Rickman on the amazing shade of his eyes. Rickman popped out one of his lenses and, in our imagination, called Newell a blithering idiot.

The underwater scenes were shot in a huge tank with a blue-screen background. Divers were on hand with air tanks to allow the actors to stay submerged for long periods of time. Daniel Radcliffe alone logged nearly 42 minutes underwater.

At one point, Radcliffe accidentally signaled he was drowning and sent the entire crew into a massive panic to save him.

During underwater filming, the cast and crew posed for a photo that was later sent out as a Christmas Card after Photoshopping Rudolph’s nose and antlers onto everyone’s faces.

Because of all the filming underwater, Radcliffe suffered from two ear infections.

The kids had three weeks to practice their dancing for the Yule-ball Waltz. Unfortunately, Daniel Radcliffe being in nearly every scene only left him four days to prepare. It is for this reason they only shot him from the waist up, to hide his fumbling feet. Luckily, Harry Potter was never meant to be a good dancer. Or Prancer. Or Vixen.

Using the basilisk puppet from The Chamber of Secrets, the crew was able to construct a full sized dragon that could even blow real fire. This dragon was used for the shots when the dragons were in their cages.

In the books, the Patil sisters were sorted into different houses (Gryffindor and Ravenclaw). In the film, they both end up in Gryffindor and are played by unrelated actresses.

Dobby and Winky were cut out of the film due to time constraints, but if you don’t blink during the campsite scene, you’ll see them riding past on llamas.

Icelandic viewers of the film giggled during the introduction of Rita Skeeter because her surname sounds close to “skita,” a rather crude Icelandic slang word for defecation. Given Rita’s role in the film, it wasn’t entirely inaccurate.

This was the first film in the franchise to not open with a scene involving Harry. True to the book, the film opens with The Riddle House, focusing instead on He-Who-Shall-Not-Be-Named.

The studio originally wanted The Goblet of Fire to be made into two separate films, released several months apart. Alfonso Cuaron, the director of The Prisoner of Azkaban, convinced Mike Newell not to do it.

Katie Leung, who played Cho Chang, wasn’t originally going to audition. Her father had simply mentioned where the auditions were held and she decided at the last minute to attend, forgoing a shopping trip.

14. Well, He DID Discover America

Mike Newell received a million dollars for directing the film. By comparison, Chris Columbus, director of the first Harry Potter film, made ten million dollars and a percentage of the gross. Newell needs a better agent.

The books in Dumbledore’s library are actually phone books in disguise.

For those who read the books, they would know that Ron’s brother Percy played an important role and early drafts of the film included him. However, the actor who played Percy was under contract for four films and had already acted in the first three. He had a bigger role in the fifth movie, so he opted to do that instead.

Radcliffe underwent a lot of physical changes while filming Goblet of Fire. According to director Newell, he was editing a scene in which Radcliffe looked like the kid from the first movie, and then eleven months later, he didn’t look like that at all.

The films give the impression that Beauxbatons is an all-girls school while Durmstrang is an all-boys school. This is not the case in the books.

Newell staged a brawl with one of the Weasley twins to both demonstrate what he wanted in a scene and to undermine his own authority (he was tired of them calling him “sir”). The brawl got so intense that he fractured a rib in the process.

Michael Gambon wore street clothes under his Dumbledore costume and kept cigarettes tucked into his sock.

Goblet of Fire was Robert Pattinson’s (of future Twilight fame) first movie. He played Cedric Diggory. Unfortunately, this is the only movie in which he dies.

This is the first Harry Potter film to receive a “PG-13” rating or its international equivalent (for sequences of fantasy violence and frightening images). The preceding films having been rated “PG.”

The newspaper headline “Harry Potter and the Triwizard Tournament” was one of the potential titles for the fourth book.

Director Newell wanted the Dark Mark to “bubble up” out of the skin of Voldermort’s followers. The makeup department achieved this by using iterative variations of a silicone skull and snake, making each subsequent version angrier and angrier. The snake was made to move via CGI.

This is the first movie to not feature the Dursleys. This is because the family that played the Dursleys demanded more money forgetting that they’re the Dursleys and not the cast of Friends.

The rock band at the Yule Ball is comprised mostly of members of Pulp and Radiohead. In the run-up to the movie, a Canadian folk group called the Wyrd Sisters filed a forty million dollar lawsuit against Warner Brothers, Jarvis Cocker from Pulp, and Jonny Greenwood and Phil Selway, of Radiohead for the use of their group’s name. In the book, the band is called the “Weird Sisters”, after the witches in William Shakespeare’s “Macbeth”, but was reportedly renamed the “Wyrd Sisters” for this film. Before the movie was released, however, Warner Brothers removed all references to either name for the band. 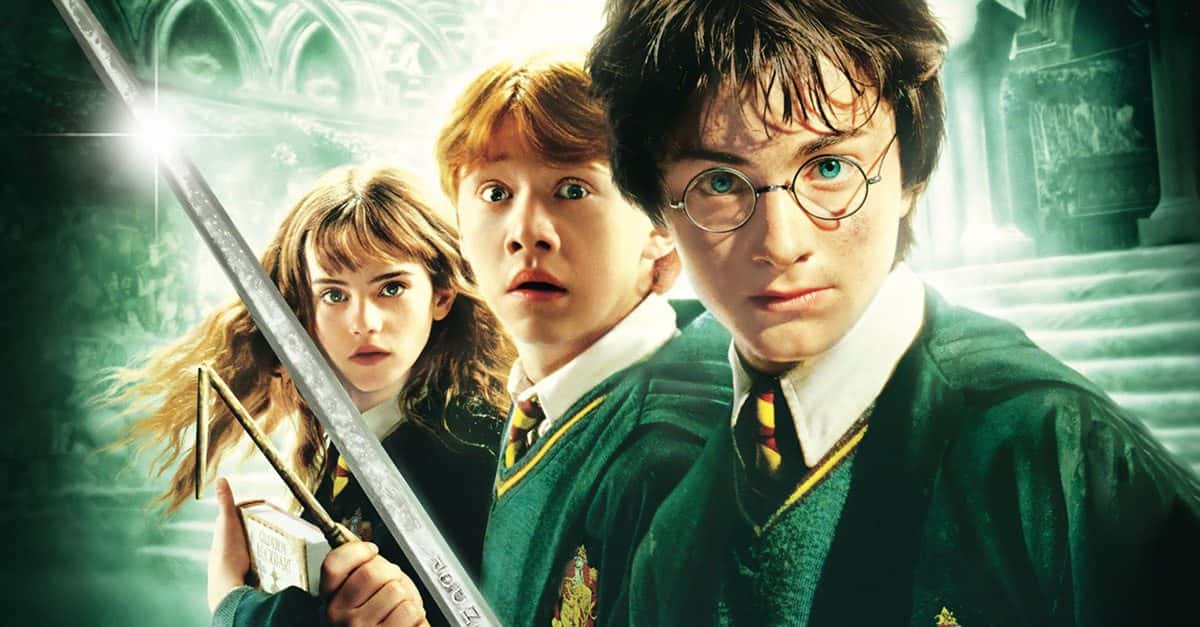 Petrifying Facts About Harry Potter And The Chamber Of Secrets