Though it didn’t quite achieve the insane mass-appeal of properties like Star Wars and Star Trek, Ridley Scott’s 1982 dystopian epic Blade Runner has still entrenched itself in the history of sci-fi, collecting an utterly devoted following along the way. The film’s dark, dank, neon-lit world was unlike anything anyone had ever seen before, and fans everywhere were ecstatic to learn that they’d get to return to that world in 2017 with Denis Villeneuve’s sequel, Blade Runner 2049. Though like the original, this new entry into the canon underperformed at the box-office, it was a critical darling that is fast on the way to achieving the same cult status. Read on for 25 facts about the science fiction classic.

Blade Runner is based on the book Do Androids Dream of Electric Sheep by visionary science fiction writer Philip K. Dick, though many liberties were taken with the story. But, unlike so many film adaptations that end up being despised by their original creators (I’m looking at you, Alan Moore), Dick actually felt like the movie did an excellent job of capturing the spirit of the book, though he sadly passed away before it was fully completed.

The name “Blade Runner” never appears in Do Androids Dream of Electric Sheep—it was simply selected because it sounded cool. Screenwriter Hampton Fancher got the name from William S. Borroughs’ book Blade Runner: A Movie, who in turn got the name from Alan Nourse’s 1974 novel The Bladerunner, neither of which have anything to do with androids. Ridley Scott instantly loved the title “Blade Runner” when his screenwriter suggested it, and he got permission from Burroughs to use the name. Some reissues of Do Androids Dream of Electric Sheep have actually used the title Blade Runner as well.

Have you ever tried to describe Blade Runner but couldn’t quite find the precise word to use? Well, the novel and film are considered seminal examples of the sci-fi genre “cyberpunk,” which also includes properties like Altered Carbon and Akira. So there you go.

Ask just about anybody what the most iconic line from the first movie is and they’ll give the same answer: “All those moments will be lost in time… like tears in rain.” Believe it or not, that line was actually improvised by actor Rutger Hauer. Hauer also used “All Those Moments” as the title of his autobiography.

Director Ridley Scott views Blade Runner as his most personal film. He also views it as a good lesson for other filmmakers, due to its initial negative reaction and later critical success: “Don’t listen to acclaim or criticism. Simply carry on, and make your movie.” Preach it, Ridley.

During writing, Blade Runner was also titled “Dangerous Days,” and the less creative “Android” (which honestly makes the most sense, but I’m not going to argue).

The moral conundrum of having a protagonist who kills androids who only wish to live as real people is what drew Ridley Scott to the script in the first place. That fact isn’t surprising, as it’s that tension that gives Scott’s movie such an intense emotional impact—something that Denis Villeneuve managed to capture perfectly when he made his sequel decades later.

Though it was a financial disappointment, Blade Runner 2049 at least got some love from the Academy, getting Oscars for “Best Visual Effects” and “Best Cinematography.” The latter award, given to Roger Deakins, marked his first win in 14 nominations. Some of his previous work includes The Shawshank Redemption, Fargo, Skyfall and Sicario.

Ridley Scott has admitted that his working relationship with lead actor Harrison Ford was not a good one, especially as filming wore on. He’s acknowledged that so much of his time was spent concerned with the small details that helped him build such a convincing world that he didn’t give enough time to his star. But while Scott says the rift was draining, he still praises Ford as an “intelligent, incisive and articulate man.”

Although it’s considered a masterpiece today, Blade Runner was a box office flop at the time of release (1982). Analysis attributes the lack of success to the film’s dark tone, slow pace, and competition from E.T. Funny, because nowadays you can’t walk ten feet without tripping over a dark, gritty sci-fi flick.

Blade Runner’s initial reviews were mixed to negative, but Scott remembers Harrison Ford’s wife, Melissa, telling him how much she loved the movie, so there was at least that.

Since several different cuts of the original Blade Runner have been released, fans of the film will likely argue forever over which is the “definitive” version—though in Scott’s own words, the director’s cut was much clearer to him than the theatrical cut. Fortunately, Blade Runner 2049 director Denis Villeneuve says the theatrical cut is the one and only for his film, so at least we don’t need to argue over this one.

Blade Runner 2049 director Denis Villeneuve decided to film his movie with the assumption that Apple did not exist in the fictional universe, hence the enduring popularity of firms like Atari. A world without Apple? I can’t even imagine!

Blade Runner is one of the films selected by the National Film Registry for preservation due to its status as a “culturally, historically or aesthetically significant” film. This list also includes films like Back to the Future, Citizen Kane and 1931’s Dracula. Take that, all those critics who panned the movie in the 80s.

Battlestar Galactica creator Ronald Moore acknowledges that Blade Runner was a key influence on his own property.

Like its predecessor, Blade Runner 2049 also underperformed at the box office. Alcon and its investors faced losses of about $80 million. Ridley Scott primarily blamed the failure on the film’s length: “It’s long. Too long.” In a less diplomatic statement, Scott added “It was f***** way too long. F*** me! And most of that script’s mine.” I hate to say it Ripley, but I saw 2049 and I saw Alien: Covenant, and I think maybe you shouldn’t be throwing too many stones.

Rapper/producer EL-P, who may be best known as half of rap duo Run The Jewels, was approached to create a score for Blade Runner 2049’s first trailer. His score was later “rejected or ignored” according to his Instagram, though he later said he was “honored to even be thought of.”

Some analysts predict Blade Runner 2049 will become a cult classic, just like its predecessor. I, for one, second that opinion.

The very first scene in 2049, in which Ryan Gosling’s K questions Dave Bautista’s character, Sapper, at a farm, leading to a brutal fight between the two replicants, was actually a discarded scene from the original.

Alcon Entertainment purchased the rights to a Blade Runner sequel back in 2011. In 2015, co-founder Andrew A. Kosove said Christopher Nolan was his favorite choice to direct the then-untitled sequel, if Ridley Scott couldn’t return: “Our friend Christopher Nolan, who we did Insomnia with, would be the pie in the sky for us.” Honestly, that choice makes perfect sense to me.

Some of the companies featured in adverts in Blade Runner later went bankrupt or dissolved, leading some to call this phenomenon the “Blade Runner curse.” Victims include Pan AM airlines and Atari (yes, Atari exists today, but it’s technically a different company than the one referenced in the original film, so there).

While filming an action sequence for Blade Runner 2049, Harrison Ford punched Ryan Gosling… for real. According to Gosling, Ford didn’t apologize. Ford instead poured Gosling a glass of scotch and told him it’s an honor to be hit by Indiana Jones. Additionally, Ford pushed Gosling out of the way when the crew brought ice for Gosling’s face. Ford used the ice to soothe his fist instead, saying that part of Gosling’s job was to be out of the way of the punch.

Production of Blade Runner was infamously difficult for director Ridley Scott due to the constant pressure and doubt from studio representatives and the crew, once saying “Now the world is educated as to special effects and such, but in those days, they didn’t know what the f*** I was doing.” Scott admits he got fed up with answering questions about his methods and became “a screamer” to deal with the people around him. 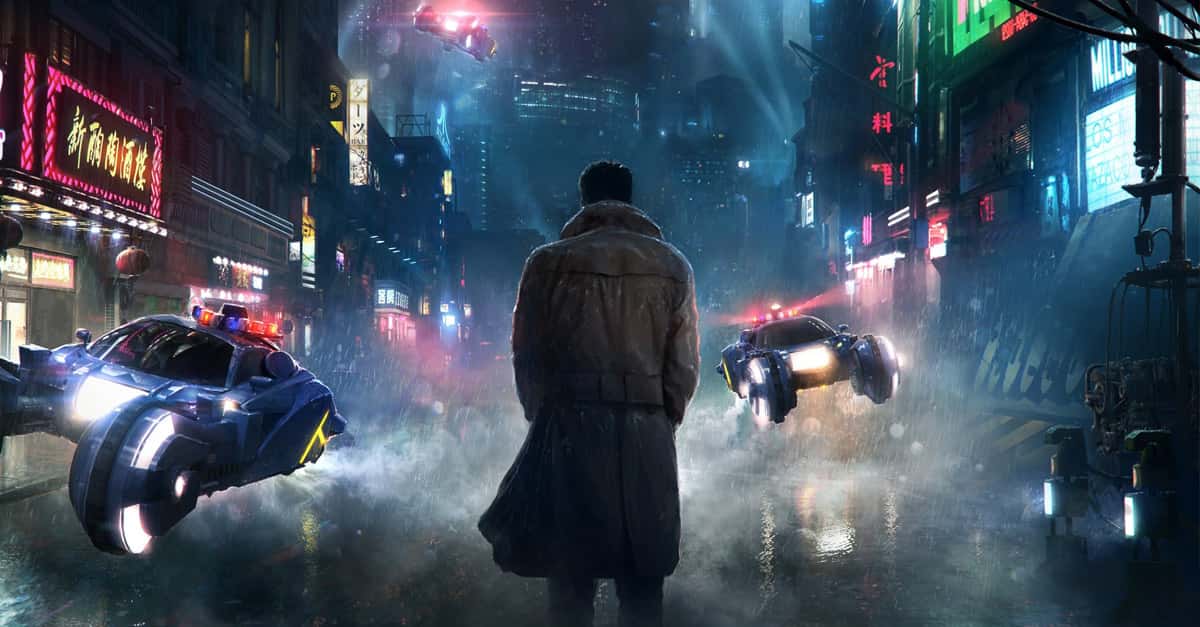