“I always believed that when you follow your heart or your gut, when you really follow the things that feel great to you, you can never lose, because settling is the worst feeling in the world” -Rihanna

Rihanna was born on Feb 20, 1988 in Barbados. At age 16, she signed with Def Jam Records, and she released her first album, titled Music of the Sun, in 2005. The album sold more than two million copies worldwide, and established her as a major talent on the world stage. She continues to dominate the pop music scene and is an all-around diva. Below are 49 fabulous facts about Rihanna.

“Diamonds,” from Rihanna’s album Unapologetic, is Rihanna’s favorite of all her songs. Ironically, when it comes to jewellery, she prefers gold baubles to diamonds.

Beyonce and Jay-Z are constantly trying to expand Rihanna’s palate, and they have a weekly tradition called “Taste Test Tuesday” or “New Flavor Fridays” or “Substitute Saturdays” where she has to try new foods.

47. Confined by Her Career

At the beginning of her career, the studio execs at Def Jam wouldn’t allow Rihanna to wear anything too revealing—or even wear red lipstick—so that she could appeal to a younger demographic. Rihanna describes this period as “claustrophobic”; she felt like they were forcing her into a blueprint.

When Jay-Z met Rihanna, he wouldn’t let her leave the building until she signed a record deal with him. She signed a six album deal that same day.

After her album Good Girl Gone Bad dropped, Rihanna felt like it was her first step to becoming a true artist. She said: “The other stuff I did was easy breezy—a lot of [it] I felt was stuff that any artist could have done. This [album] only a certain artist can do.”

Rihanna didn’t go by her middle name until after she became a star. Her full name is Robyn Rihanna Fenty.

Rihanna was a self-professed tomboy when she was growing up, but even then she still had a penchant for shoes.

When Rihanna was a kid, she joined the army cadets. The singer Shontelle was her drill sergeant, and would order the cadets to do push-ups when they showed up late on the parade square.

Back when she was in high school in 2004, Rihanna won the Miss Combermere school beauty pageant.

At age 15, Rihanna won a talent show with a rendition of Mariah Carey’s hit song “Hero”.

Rihanna cites Janet Jackson, Mariah Carey, Madonna, and Beyonce as her singing idols when she was growing up.

36.The Only One in the Room

While music producer Evan Rogers was vacationing in Barbados, mutual friends arranged to have Rihanna and two of her classmates audition for him. He told Entertainment Weekly in an interview that the minute Rihanna walked into the room, “it was like the other two girls didn’t exist.”

When Rihanna met Jay-Z, she was so star-struck she remembers thinking “I can’t look! I can’t look!”

At one point, Rihanna was falsely rumored to be having an affair with Jay-Z, who was with Beyonce at the time.

Rihanna’s first single “Pon de Replay” hit the top five on the Billboard chart. The song was so big that Jay Z was worried it would be the only song she would become known for.

In 2005, Rihanna was the opening act on Gwen Stefani’s Harajuku Lovers tour. She definitely doesn’t need to open for anyone now!

“S.O.S. (Rescue Me)” was Rihanna’s first number one hit. Altogether, she’s recorded a record-setting 14 number one songs on the Billboard Top 100.

Rihanna won her first Grammy Award for “Umbrella,” a collaboration with Jay-Z. Her second Grammy was also for a collaboration, this time with Jay Z and Kanye West on “Run This Town.”

29. Leave the Umbrellas at Home!

Fearing that fans would injure themselves trying to copy her dance moves with the umbrellas when she performed “Umbrella,” she banned audiences from bringing them to her UK concerts.

Rihanna’s songs have been downloaded an estimated 75,000,000 times; she is the best-selling digital download artist of all time.

In Sept 2009, Rihanna appeared on the cover of Italian Vogue for their “Extreme Couture” edition.

Rihanna was named the official face of Barbados tourism in 2007, and holds the honorary title of “Ambassador for Culture and Youth.”

Barbados also created a national holiday to honor Rihanna in 2008. Rihanna put on a free concert for her local fans as a way of saying thanks.

23. It Can Happen to Anyone

Rihanna’s tumultuous relationship with Chris Brown was frequently in the headlines while they were dating, but things came to a head right before the 51st Grammy Awards in 2009, when Brown assaulted her. It took her 9 months to break her silence about the incident: She told Diane Sawyer “This happened to me. It can happen to anyone.”

After TMZ got hold of a leaked photograph of Rihanna’s injuries from the LA Police department, an organization called “STOParazzi” proposed a law that would deter law enforcement employees from releasing exploitive photos of crime victims. The law was referred to as “Rihanna’s Law.”

One of Rihanna’s favorite restaurants is an Italian restaurant in Santa Monica called Georgio Baldi. Her usual order is spaghetti with tomato sauce and fried calamari.

Rihanna made her feature film debut in the 2012 movie Battleship. The film starred Liam Neeson and Alexander Skarsgård.

Rihanna likes to send her mother gifts, but her mother often sends these presents back because they are too expensive. One gift that her mother couldn’t send back was the five bedroom house in Barbados Rihanna purchased for her.

Despite having posted some racy photographs of herself on Instagram, Rihanna has repeatedly turned down offers to pose for Playboy Magazine.

Rihanna always drinks a shot prior to going on stage. Usually she drinks dark liquor, but she’ll occasionally have vodka instead.

Rihanna has her own fragrance line, and achieved great success with her debut scent “Reb’l Fleur.” Subsequent fragrances include “Rebelle” and “Nude.”

The Video “We Found Love” was shot on a farm in Ireland but, after seeing Rihanna’s raunchy dress code while the crew were filming, the farmer had a change of heart and asked her and her crew to leave and “go find God.”

Rihanna is ranked 6th on a July 2017 list of the Top Ten Most Popular People on Facebook. She has 81 million likes, edging out Justin Bieber’s 78.7 million likes.

11. This One Goes to Bieber

Rihanna is reportedly paid $100,000 by fashion designers to sit in the front row of their catwalk shows and pose for cameras at various Fashion Weeks. Not too shabby.

Rihanna has at least 25 known tattoos, including music notes on her foot, a star inside her ear, a skull on her ankle, and a tribal design on the back of her hand.

8. Getting a Feel for Her Audience

Before a performance, Rihanna likes to disguise herself as a fan and go into the audience to get a feel for their energy. She will often wear a hoodie to keep herself from being recognized.

After a show, Rihanna likes to go into her dressing room and strip down to her fishnet stockings for a while. She has said that she finds being naked relaxing.

On Valentine’s Day 2013, Rihanna received the unusual gift: a marijuana bouquet. Some sources believe the sender was Chris Brown, as the two were together that day.

5. A Serious Craving for Munchies

Rihanna loves junk food, and rumour has it that her entire tour rider (a set of demands for a musical performance) is filled with requests for junk food. Flaming Cheetos are among her favorite snacks.

In 2011, Rihanna stirred up controversy with her “S&M” Music Video. YouTube restricted the video, deeming it “inappropriate for some users.” The video was also banned in 11 countries, and BBC Radio 1 refused to play the track before 7pm.

Rihanna is a hard-core Star Trek fan, and her 2016 single “Sledgehammer” was used to promote the third film in the franchise reboot. In an interview with High Snobiety, she explained that her dad got her into the show when she was a child, and that it only took her one episode to get hooked.

When Rihanna was a little girl, she witnessed an exorcism at a friend’s house. Since then, she’s been afraid of ghosts: She won’t visit the Chateau Marmont due to her fears. She insists that the place is haunted, and that the hotel is “borrowed space.”

1.From Pop Princess to Sex Symbol

With the release of her third album, Good Girl Gone Bad, Rihanna shed her Pop Princess image and emerged as a full-fledged sex symbol. The album was also a musical departure from her breezy, Caribbean sound, and featured a more upbeat R&B/electronic sound that incorporated many 80s pop influences. The experiment paid off, and the album sold more than 7 million copies worldwide. 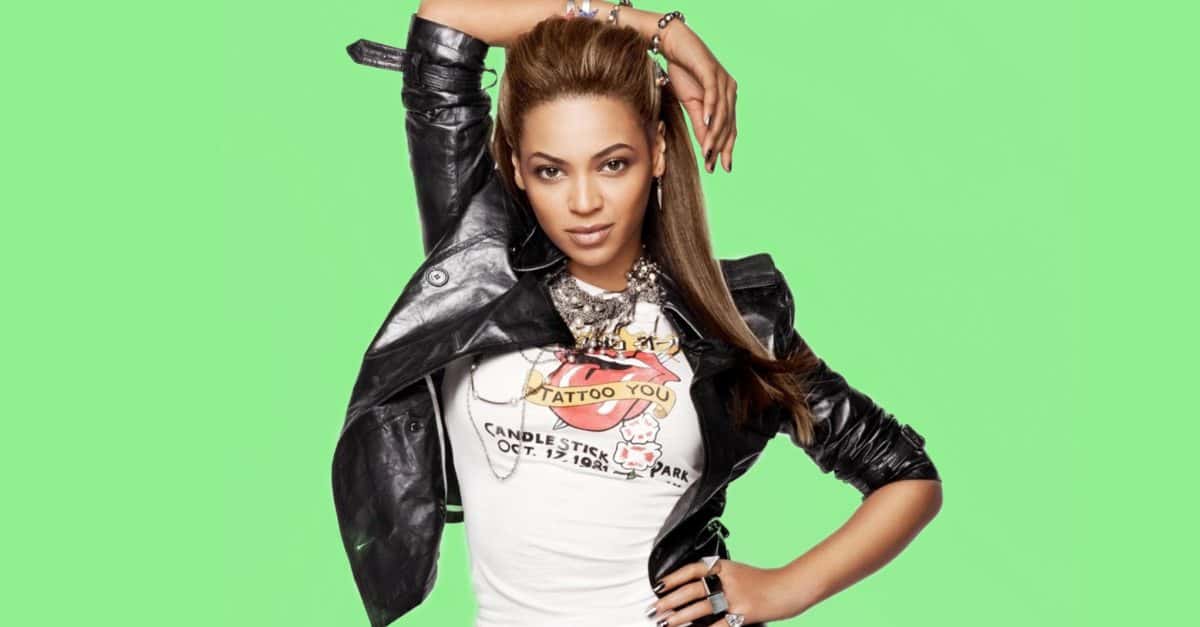