Known for his energetic slapstick performances, Jim Carrey burst to stardom after comedic roles in Ace Ventura, Dumb and Dumber, and The Mask.

Here are a few things you might not know about the man of a thousand faces, Jim Carrey.

Carrey claims that if his career in show business hadn’t worked out, he would most likely be working at a steel mill in Hamilton, Ontario.

When he was ten years old, he wrote a letter to Carol Burnett to inform her that he was already a master of impressions and should be considered for a role on the Carol Burnett Show. They formally declined, but he was happy just to get a reply.

Carrey wrote letters to Tupac Shakur when he was behind bars in order to make him laugh and lift his spirits.

Carrey’s father was supportive of his son, and would drive him into Toronto so that his son could perform on stage for free in pursuit of a career that, in all likelihood, would go nowhere. Now that’s fatherhood.

Carrey first hit the stage at Yuk Yuk’s in Toronto and, initially, he bombed, making him seriously doubt his ability to become a performer. But he kept at it, and eventually honed his act, building his reputation and going from open-mic nights to regular paid shows. Paid in beer. But still.

Rodney Dangerfield, the legendary comic, took notice of Carrey and signed him to open for him on tour performances.

Dangerfield wanted to take Carrey to Las Vegas, but Carrey decided to move to Hollywood where he hit the real jackpot. Within a year, Carrey had a spot on The Tonight Show, which at the time, was a golden ticket to fame and fortune.

Jim Carrey’s first wife, Melissa Womer, was a waitress at Comedy Store, the LA comedy club where Carrey performed regularly. They have a child together proving that he gave this waitress more than just the tip.

Jim Carrey’s first lead role in a Hollywood production was in the short-lived TV sitcom The Duck Factory, in which he played Skip Tarkenton, a naïve optimist who goes to Hollywood for a job and ends up working at a low-budget animation company where he has to draw a duck over and over and over. So Carrey’s career trajectory went from playing a cartoonist to actual cartoon.

Carrey got a role on the 1989 film Earth Girls Are Easy, which is where he met Damon Wayans who’s brother Keenan was creating In Loving Color. Damon made an introduction, Carrey was cast, and a Fire Marshall was born.

1994 was a huge year for Carrey as he was cast in the lead roles for Ace Ventura: Pet Detective, The Mask, and Dumb and Dumber. All three films were commercial successes and Carrey received a Golden Globe Award nomination for his role in The Mask proving that, sometimes, it’s not so bad being green.

After his divorce from Womer in 1995, Carrey married his Dumb and Dumber co-star Lauren Holly. The marriage lasted less than a year which, as rebound marriages go, isn’t that bad.

15. Crying All the Way to the Bank

Jim Carrey received a then-record $20 million to star in Ben Stiller’s The Cable Guy, a dark comedy that confused audiences who expected the fun and wacky guy from Ace Ventura. Although the film made money, it was widely considered to be a massive failure. Fortunately, $20 million helps dry a lot of tears.

14. The Truth Shall Set You Free

Carrey rebounded from The Cable Guy with Liar Liar and received his second Golden Globe Award nomination by playing a successful lawyer who builds his career with lies and becomes a better human once he learns to embrace truth. So, y’know, a fantasy.

Carrey was engaged to his Me, Myself and Irene co-star Renee Zellweger from 1999-2000.

Carrey got a taste of what it’s like to be God in Bruce Almighty playing opposite Jennifer Aniston and Morgan Freeman. Despite mixed reviews, the film grossed nearly half a billion dollars worldwide and has since gained a cult following, y’know, as gods do.

For his role in Eternal Sunshine of the Spotless Mind, Carrey received another Golden Globe nomination and his first BAFTA Award nomination for Best Actor. You know you’ve made it when you get praise from the British.

In 2004, Carrey received a star on Canada’s Walk of Fame, right between household names Pierre Berton and Karen Kain.

Carrey played multiple roles for the first time in his career in the 2009 Dickens’ classic A Christmas Carol in which he voiced Ebenezer Scrooge and the Ghosts of Christmas Past, Present, and Future.

In 2013, Carrey self-released a children’s book he had written titled How Roland rolls, about a scared wave named Roland. Carrey described it as “kind of a metaphysical children’s story, which deals with a lot of heavy stuff in a really childish way.”

In 2014, Carrey was honored by Canada Post with a limited-edition postage stamp with his portrait on it thus allowing us to live out our fantasy of licking the back of Jim Carrey’s head.

Like a lot of comedians, Carrey has battled depression. He took Prozac for a time but, since then, has been off medication and avoids stimulants of any kind, including coffee. Yes. What you’re getting is Jim Carrey without caffeine.

Carrey met Jenny McCarthy in 2005 and the two dated for five years, which was enough time for Carrey to get on board with McCarthy’s crusade against science. Too bad there was no vaccination against that.

In 2015, Carrey’s former girlfriend, Cathriona White, was found dead of a prescription drug overdose in what was ruled a suicide. Carrey was devastated and performed pallbearer duties at the funeral.

In 2016, White’s husband and mother both filed wrongful death lawsuits against Carrey that he has characterized as a “cash grab.” The lawsuits claim that Carrey gave White both illegal prescription drugs and STDs. White’s lawyer actual statement: “Instead of giving Ms. White flowers and chocolates, Carrey should have given her his STD test results… THAT is what she deserved on Valentine’s Day.”

Carrey is an advocate of the Law of Attraction, the pseudoscientific theory that thinking about something hard enough will make it happen. Of course, the man visualized receiving a $10,000,000 cheque seven years for before he actually received one for Dumb and Dumber. 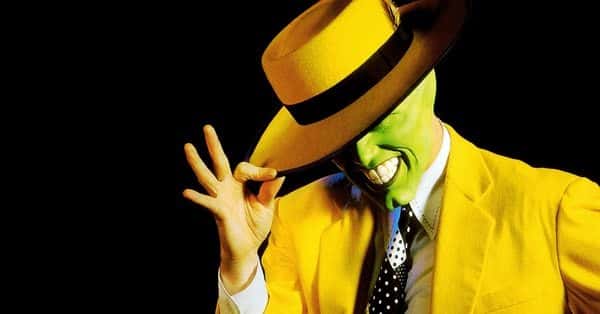 Smokin’ Facts About The Mask