28 Momentous Facts About Time’s Person of the Year

28 Momentous Facts About Time’s Person of the Year

Given out annually, Time magazine’s Person of the Year has become, for better or worse, an American institution. The iconic portraits of past winners come to symbolize the magnitude of their accomplishments.

And though the distribution of winners is somewhat uneven, and dominated by white men (nothing new), it has become a tradition many look forward to discussing. When the Time announces the latest winner, the news cycle goes on notice. Almost every major media-outlet under the sun publishes a piece (or two, or five) discussing the merits of the decision, and hundreds of hours are devoted to debating the choice on TV, online, and in homes around the world.

Time’s Person of the Year Facts

In 2006, “You” were chosen as the Person of the Year. That’s right, you! The award was given in order to acknowledge the growing world of the internet and the content curators who inhabit it. Ahem…

Since the list started, every United States President has been named Person of the Year, except for these three: Calvin Coolidge, Herbert Hoover, and Gerald Ford. Coolidge and Hoover were the first two Presidents in the tradition’s existence, and Gerald Ford…well, he was Gerald Ford.

Time magazine began their annual tradition of selecting a Person of the Year in 1927 with a Man of the Year, because remember women didn’t have the right to even vote in the United States until 1920. 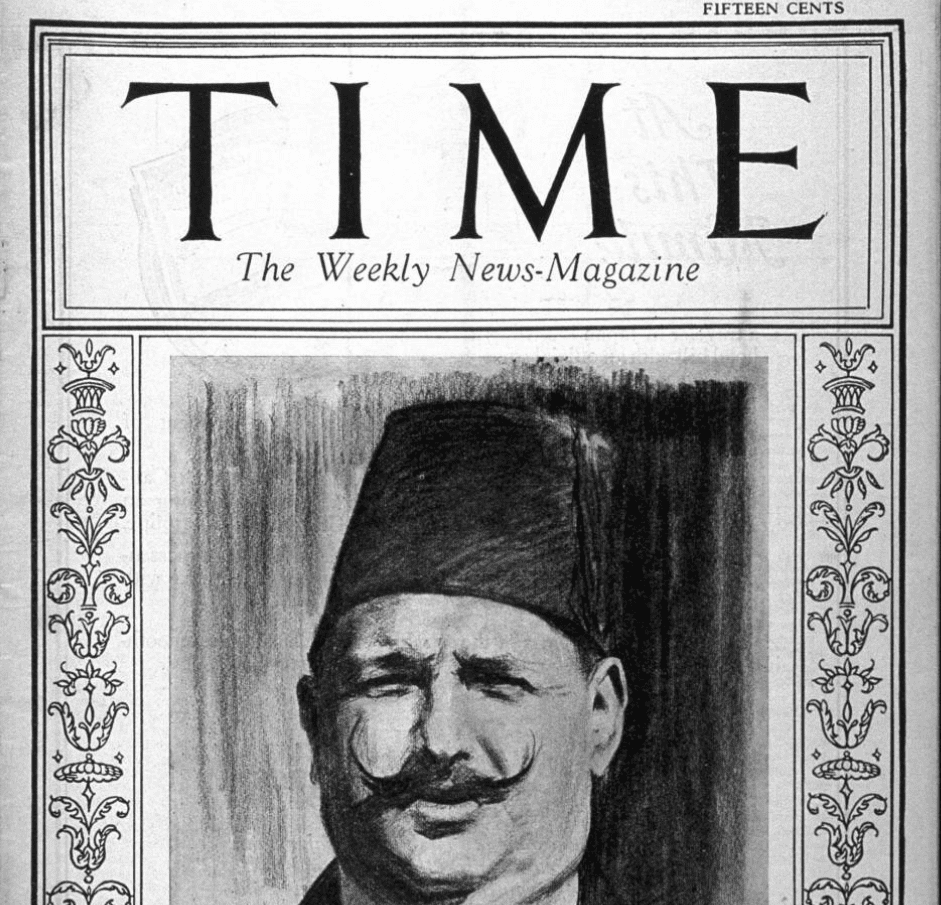 Charles Lindbergh was chosen as the first Person of the Year, and the whole idea actually stems from an earlier decision by the magazine not to feature Lindberg on its cover after his historic flight across the Atlantic. Time received controversial backlash, and in order to remedy this editorial embarrassment, they created the Man of the Year in order to cover the story of Lindberg.

Lindbergh was a US Air Mail pilot who became famous after making the first solo transatlantic flight in history and the first non-stop flight between North America and mainland Europe. For this feat, he gained the Medal of Honor and became a massive celebrity. He was 25 when he got it, and is still the youngest person named Person of the Year.

Lindberg went on to devote his time and effort to promoting commercial aviation, but his fame came at a price. In 1932, his infant son was kidnapped and murdered, leading to a massive outcry and one of the first scandals in modern media, as it was dubbed the “Crime of the Century.” The Lindbergh family went into voluntary exile due to the strife of not only dealing with the death of their child but the public hysteria surrounding it.

After returning to the US in 1939, Lindberg again was in the press after he supported the anti-war movement. The media accused him of being a fascist sympathizer, and he was publicly rebuked by President Franklin Roosevelt. After Pearl Harbor, Lindberg put his support behind intervention, and personally flew 50 combat missions in the Pacific Theater of WWII as a civilian consultant, as Roosevelt refused his reinstatement into the Air Corp colonel’s commission.

The kidnapping and murder of the child of Charles Lindbergh led to a change in US law, which previously considered kidnapping to be a state crime. After the tragedy, the United States Congress upgraded kidnapping to a Federal Crime once the kidnapper crosses state lines with his victim.

Though Time has a history of naming controversial figures as Person of the Year, they have largely backed away from doing so after granting Ayatollah Khomeini the title in 1979, for fear of losing sales and ad revenue.

In 1941, Time was playing with the idea of selecting a Mammal of the Year. Their idea was to name Dumbo the Mammal of the Year, and feature him on the cover in a formal portrait. However, right before they went to release the issue, the attack on Pearl Harbor occurred, and President Franklin Roosevelt was named Person of the Year for a record third time. Dumbo would still get credit as Mammal of the Year inside the issue, but he lost his chance at immortality. He’s still number one in our hearts, for what it counts.

Three-time winner President Franklin D. Roosevelt suffered from triskaidekaphobia, fear of the number 13. He also had his hand in at least 5 different titles, as Hugh Johnson was awarded the title after being tasked by Roosevelt to bring labor, government, and industry together under the New Deal, and Harry S. Truman became President after Roosevelt’s death. Roosevelt would also go on the be the Runner Up in the Time’s Person of the Century.

Who did Roosevelt lose out to? Albert Einstein. While Einstein never actually received the title of Person of the Year, his contributions to a century of unprecedented scientific exploration landed him the nod. He was once considered for Person of the Year, though… until Adolph Hitler took home the title due to his whole “trying to take over the world” thing.

Again, it’s worth remembering that Time is adamant of awarding the title to the person they judge to be most influential, not the “best” person of the year. A person who wins the award isn’t necessarily supposed to be recieving an honor.

Following the September 11, 2001 attacks, the mayor of New York City, Rudolph Giuliani, was declared Person of the Year due to his symbolization of the American response to the attacks. There was an article in the issue, however, that made the case for Osama Bin Laden being a stronger candidate for the title…but can you imagine the backlash they would have received?

After the attacks, Giuliani built a platform for himself, using his fame and influence as a leader in American politics; he even received an honorary knighthood from Queen Elizabeth II.

Though Giuliani felt the force of terrorism, and looked it in the eye on 9/11, during a 2016 speech at Donald Trump’s presidential rally, he stated that there wasn’t “any successful radical Islamic terrorist attack in the United States” prior to President Barack Obama taking office.

The first woman to be honored with the title of Person of the Year was Wallis Warfield Simpson, Duchess of Windsor, after English King Edward VIII abdicated his throne in order to marry her. Wallis had been married twice previously, which caused a constitutional crisis for Edward. She is also the only American woman to be named Person of the Year.

Edward and Wallis became figures of public scandal in the UK, and the press dubbed them Nazi sympathizers during WWII after they visited Germany to meet with Adolf Hitler. They subsequently retired from the public eye. After the abdication of the throne, George VI was named the new King, a post that he reluctantly accepted. His story was popularized in the Oscar-winning film The King’s Speech.

In 2004, President George Bush was chosen to be on the cover, but Michael Moore claims that he wasn’t the original choice for Person of the Year. Moore said that he and Mel Gibson were actually chosen to share the cover after their controversial movies (Fahrenheit 9/11 and The Passion of the Christ) smashed box office records. However, something happened to Gibson before their photo shoot, and he dropped out, leading Time to adopt a new plan.

Time also holds an online poll for a readers’ choice Person of the Year, which does not actually choose the winner (this is done by the editors). There was a public backlash in 1998, in the very first online poll, when wrestler and activist Mick Foley was chosen by the readers only to be removed from the poll. Bill Clinton and Ken Starr were instead awarded the title.

8. Not The People’s Choice

There is now a history of Time ignoring the results of their online poll; they have ignored the choice of controversial figures such as Hugo Chavez over the last decade.

A whole generation of people was decorated as Person of the Year in 1966 as the “Twenty-five and Under” group inheriting the world. This group would go on to be named the Baby Boomers, and boy did they boom the world up.

Though not a single American woman has been named Person of the Year since Wallis Simpson altered the British Monarchy, “American Women” as a whole was given the honor in 1975. American women have been working to hold the country together for years, but at least they have this honor, right?

In 1982, “The Computer” was named Machine of the Year, heralding the dawn of the Information Age. We wonder when the first cyborg will be named Cyborg of the Year, but that probably depends on whether they dream of electric sheep or not.

2017 was a tumultuous year, and power dynamics might finally be in the process of shifting. This is in large part due to the people who spoke out against the inherent misogynistic culture of sexual abuse and harassment by many people, mostly men, in positions of power. “The Silence Breakers” had a real influence on the year, and many women graced the cover of Time for 2017.

The “Me Too” movement was actually started in 2006 by Tarana Burke. It was started as a grassroots movement to provide “empowerment through empathy” to people who survive sexual abuse, assault, exploitation, and harassment in underprivileged communities lacking access to proper counseling and help.

“The Endangered Earth” was chosen as Planet of the Year in 1988 due to the crisis of climate change facing the planet and the role of environmentalism in spreading awareness of humanity’s impact on Mother Nature. Almost 30 years later, things don’t seem to be getting much better.

Despite his celebrated career, when Winston Churchill began to slip into a coma shortly before his death, his last words were “Oh, I am so bored with it all”. Guess the title of “Man of the Half-Century” was exciting enough for him.