“I had far rather rest and spin by my mother’s side, for this is no work of my choosing, but I must go and do it, for my Lord wills it.”

Joan of Arc was only 19 years old when she was sentenced to death. Though she lived a short life, it was a remarkable one: She was highly devout and took comfort in her faith, and helped to turn the tide for France against the British during the Hundred Years’ War. Her heroic deeds and unshakeable devotion to her cause have become legendary, but underneath the myths and stories is still a vulnerable teenage girl.

Joan of Arc was born in France in 1412, right in the middle of the Hundred Years’ War between the French and the British for control over now-French territories. Her parents were poor farmers, but she learned much from her mother, like the care of animals and honing her seamstress skills. She never learned to read or write, since it wasn’t necessary to her station.

Records from that time show that her birth name was Jeanette, but she went by Jeanne, “Jehanne la Pucelle,”or “Joan the Maid.” Arc (her father’s last name) or Romée (her mother’s) was her last name, depending who you ask, and she was born in a village that bordered Lorraine and Champagne. Surnames weren’t really popular at the time, and “Romée” just meant that a person had made a pilgrimage to a religiously significant place, like Rome.

When she was about 13, Joan began having hallucinations. Though she was startled by them at first, she began to trust them. One hallucination told her to be “a good girl and go often to church.”

Later, visions came. She said that St. Michael, St. Catherine, and St. Margaret came to her, designating her as France’s savior. They also wanted her to go to France’s heir to the throne, the Dauphin Charles. She was to ask him to expel the British. 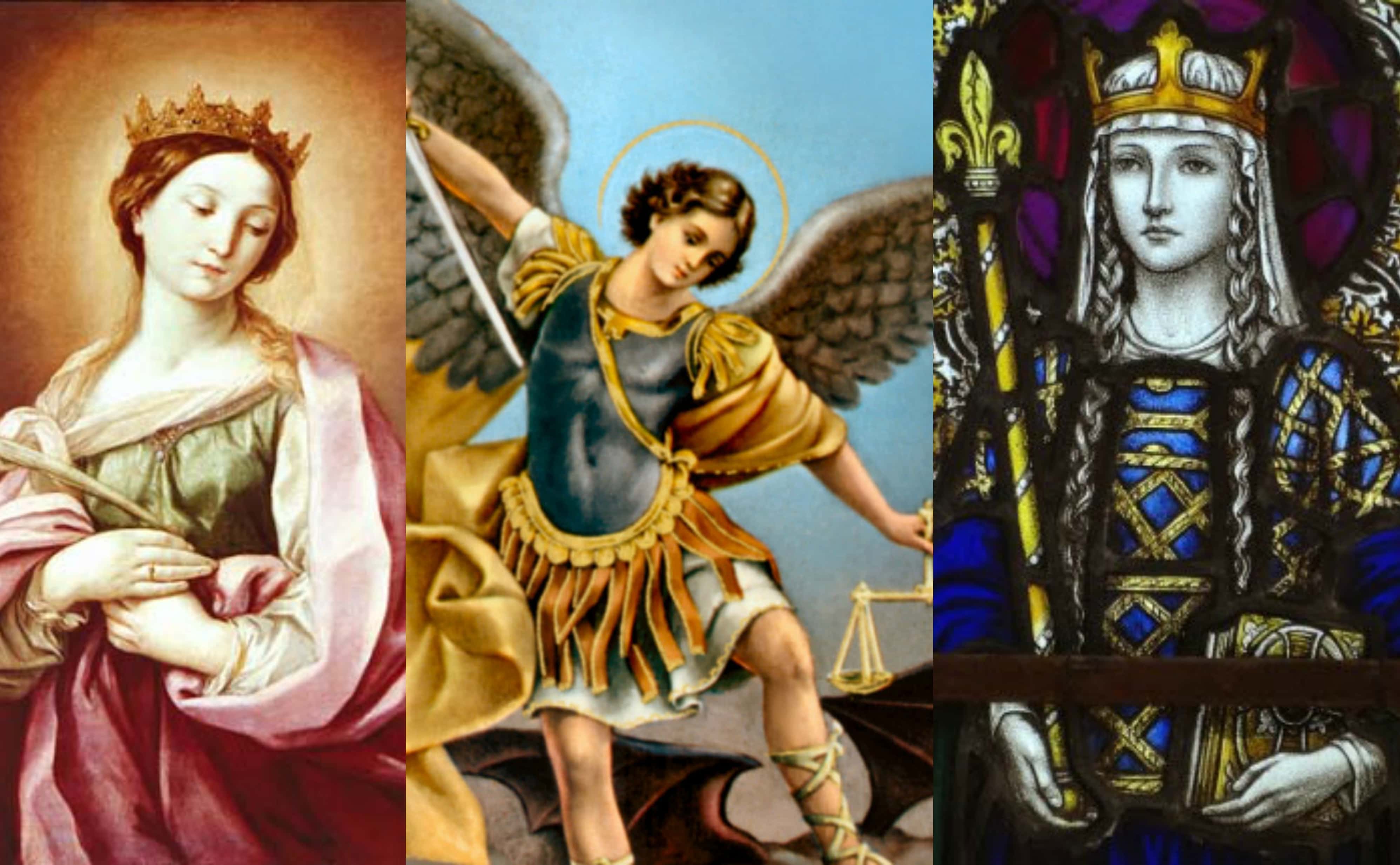 20. Mission to His Majesty

Joan believed in her visions, so she travelled to Vaucouleurs in May of 1428 and spoke to garrison commander Robert de Baudricourt, who was a supporter of Charles. He was reluctant to let her go speak to Charles, but Joan didn’t give up and he eventually relented the following year after seeing the support she had gained from the townsfolk.

19. Beginning of the End

Once she finally gained access to Charles, she chopped her hair and dressed in men’s clothes. Her journey to the Dauphin took 11 days, and Joan and an entourage travelled across enemy lands before making it to Chinon, where Charles and his court were.

When Joan first met the Dauphin, he played a trick on her: he hid in the crowds as a normal member of his court. Eerily, Joan picked him out of the masses without ever having laid eyes on him before. Still a little wary, Charles then requested that Joan be examined by theologians. They found nothing wrong with her, and only saw a devout and single-minded girl.

17. The Proof Is in Her Visions

When Joan first met the Dauphin, it’s said that she was able to recite to him a prayer that he was silently thinking of, and she also told of the whereabouts of a sword that had been hidden behind a church’s altar.

Joan of Arc was just 17 when Charles finally allowed her to go out to the battle in Orléans. With Joan on the front lines, the French managed to take control of the English defences in a series of battles. Joan was injured in the line of duty, but returned to support the final charge. It was here that she received the nickname “The Maid of Orléans.”

Most people don’t realize that Joan never actually killed another person and did not engage in battle. Instead, she was there as a symbol to help encourage and inspire the soldiers. But that’s not all: She also held the banner, helped with war strategies, and even suggested peacemaking solutions to the English (which they rejected). “I loved my banner forty times better than my sword,” she said. “And when I went against my enemy, I carried my banner myself, lest I kill any. I have never killed a man.”

Joan was seriously injured in the heat of battle on more than one occasion. One time she took an arrow to her shoulder and on another, a bolt from a crossbow to her thigh. She also fell from a siege ladder and took a heavy rock to the head.

In 1909, a Polish-born hairdresser living in France introduced the bob hairstyle, which was actually inspired by Joan of Arc. It took almost a decade for the style to really catch on, which was when it started to be sported by silent film stars and flappers.

12. She Knows What She’s Talking About

Joan kept encouraging Charles to go to Reims and be officially crowned king, but he and his advisors were wary. When he eventually did go in July, 1429, Joan was right by his side as he was coronated.

The newly-minted King Charles VII sent Joan to deal with the Burgundians in early 1430. During the battle, she was thrown from her horse and then left at the town of Compiègne’s gates. Naturally, she was taken hostage by the enterprising citizens, who immediately began negotiating her release. The Burgundians negotiated, however, not with the French but with the English, who saw her propaganda value. Eventually an exchange was made: Joan of Arc for 10,000 francs—and this was the beginning of her end.

Joan may have attempted suicide while being held captive by the Burgundians. Reportedly, she became so anxious that she jumped from a tower in the castle where she was held, either in an attempt to escape or to kill herself. However, she was quickly re-captured.

During the ransom saga, King Charles VII distanced himself from Joan; after all, he had gotten much of what he wanted and was now King. He did not intervene to try to have her released, and when the ransom was paid she was given to English church officials who wanted to put her on trial for heresy. There were originally 70 counts filed against her altogether including heresy, witchcraft and sorcery, and even dressing like a man.

8. Too Headstrong for Their Games

While on trial, a tribunal questioned her almost a dozen times in a month’s span in early 1431, but she never wavered in her claim to innocence. She was captive in a military prison and likely threatened with rape and torture. Nonetheless, she was steadfast in her faith, telling her accusers, “God has always been my Lord in all that I have done.”

7. You Gotta Have Faith

There were the suggestions made that the voices Joan heard were really just human voices, but she held true to her faith. “Those of my party know well that the Voice had been sent to me from God, they have seen and known this Voice,” she said. “My King and many others have also heard and seen the Voices which came to me.” Of St. Michael, she said, “I saw him with my bodily eyes as well as I see you.”

6. Standing by Her Convictions

Finally, Joan did break: she was offered life imprisonment if she admitted guilt, and she signed a document confessing to her sins and pledging to change her heretical ways. But you can’t keep a good woman down: days later, Joan put her male soldiers’ clothing back on and defiantly claimed to hear voices again. The judges, furious, condemned her to the stake as a “relapsed heretic”—but not for straight-up heresy.

Joan’s execution was done in the middle of the marketplace in Rouen with roughly 10,000 people crowded around to watch. The courageous teenager’s last words, even at the worst moment of her short life, were “Jesus.” After the horrible deed was done, one English soldier even said, “we are lost; we have burned a saint.” Legends say that despite her fiery death, her heart survived the blaze intact.

Modern-day psychologists classify Joan’s strange experiences as auditory and visual hallucinations. While the mental pathology of what Joan suffered from has been debated and discussed for years,  two Italian neurologists have recently suggested that she was suffering from genetic epilepsy that affected just one part of her brain, giving her those aural and visual hallucinations.

Through all this, the Hundred Year’s War was still ongoing, and it went on for 22 years after Joan of Arc’s death. Charles VII kept his throne and his crown, but ordered an investigation surrounding her untimely demise. In 1456, she was cleared of all the charges laid against her and was declared a martyr. Hundreds of years later, Joan of Arc was further recognized when she was canonized as a saint in 1920. She is known now as the patron saint of France.

Joan had a quite a temper. She frequently reamed out her French soldiers if they didn’t attend Mass, if they swore or had generally bad behavior, and particularly if they didn’t go along with her military plans. It didn’t stop there, though: she even reportedly slapped a solider for stealing meat and was known to have driven away—at swordpoint—the prostitutes and mistresses who travelled with the army.

After her death, people began to claim that Joan didn’t actually burn at the stake that fateful day. As it turns out, Joan’s brothers, lovely human beings that they were, had teamed up with a woman named Claude des Armoises, who was said to resemble Joan. With her, they claimed that Joan had actually escaped captivity and ended up marrying a knight. After being lavished with gifts and feasts by townspeople and dignitaries desperate to show their gratitude to “Joan,” Claude grew a conscience and confessed the scheme to King Charles.