22 Facts About Strange Artifacts In Museums

22 Facts About Strange Artifacts In Museums

If there’s one problem with history, it’s that there’s just too much of it. Archaeologists, historians, and scientists work around the clock year after year, but for every question they answer, two more pop up. No wonder our museums are full of the mysterious, the unexplained, and the just-plain-weird. Here are 24 mysterious objects in museums.

Discovered in an undersea shipwreck in 1902, the Antikythera Mechanism is truly a one-of-a-kind discovery. Dismissed by scholars initially, it is only since the 1970s that technology has allowed archaeologists to appreciate the mechanism. Using precise clockwork technology, the Antikythera Mechanism tracked the cycles of several planets and stars, offering precise astronomical and chronological details–very useful for navigation, but far beyond anything we were aware that the Greeks were capable of. 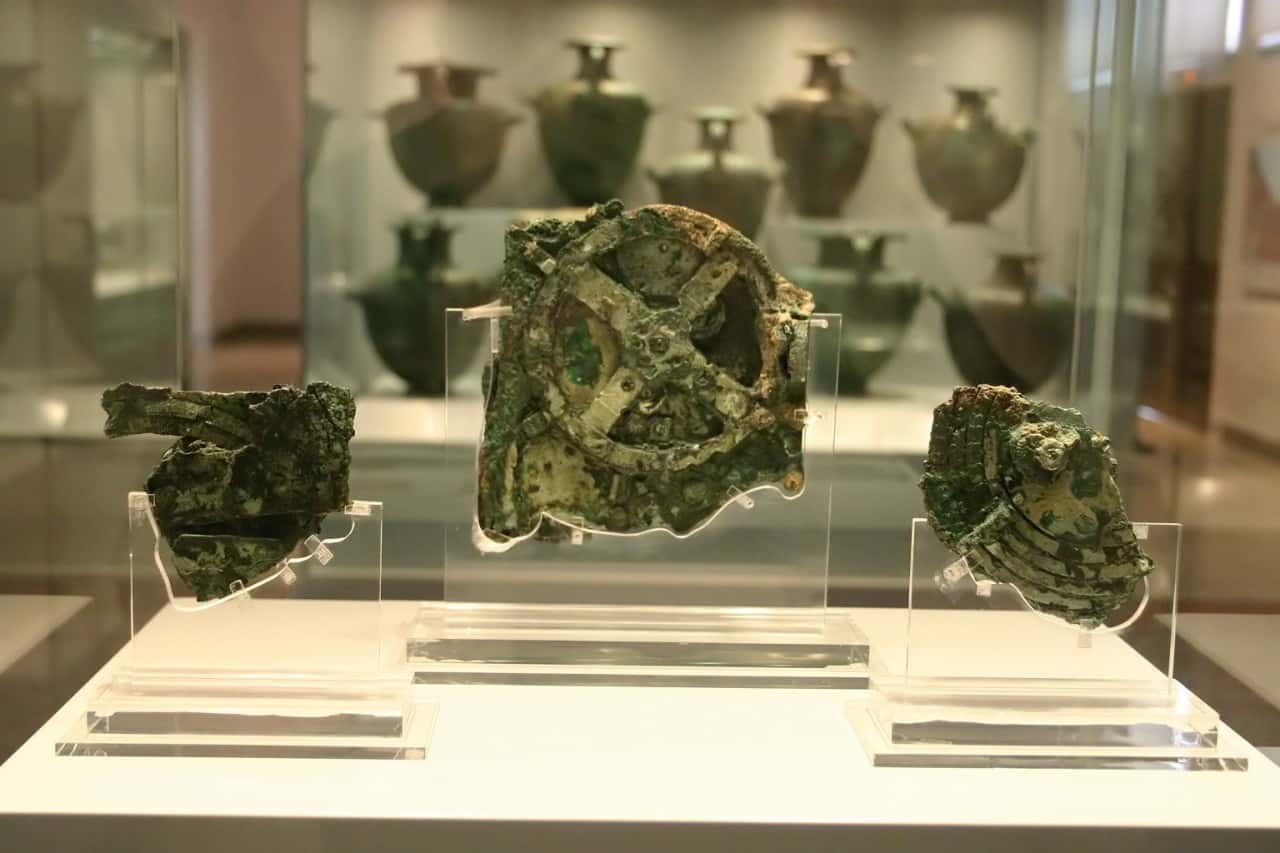 It’s been called the world’s most evil book: a medieval Bible emblazoned with a massive image of the devil. According to legend, the Codex Gigas was written by a monk who had promised to complete the bible in a single night or face execution. Such work, some say, could only have been done with the help of Satan himself. It sounds dubious, but some experts say the Codex was written by a single hand and, at 620 pages, would have taken five years of non-stop writing; none of the changes in handwriting are associated with age. 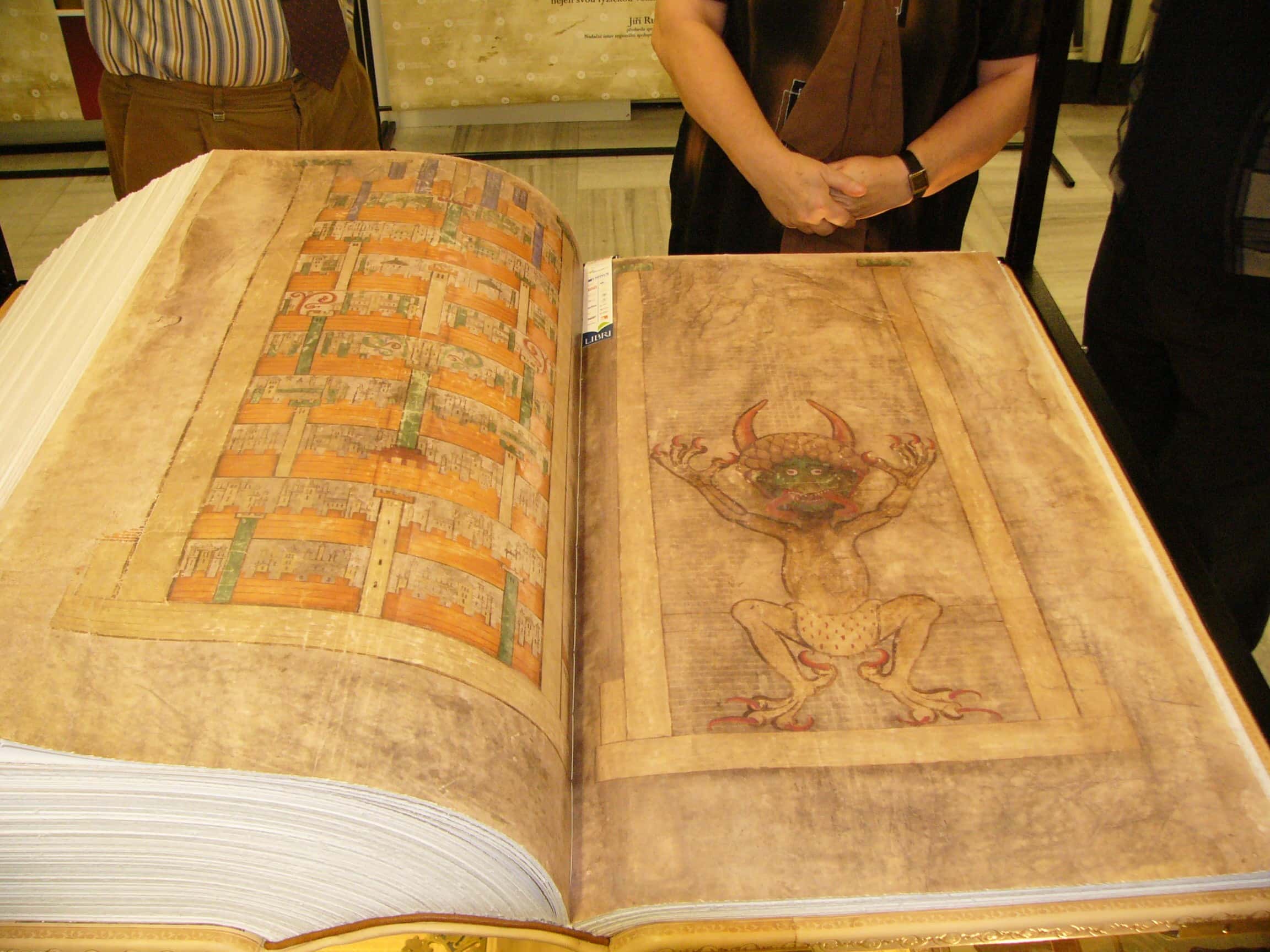 In Iraq, 1938, Wilhelm Konig discovered an interesting clay pot. Inside was an iron rod in a copper sheath, some wires, and the residue from an acidic solution. It was hard for him to believe the ancient Mesopotamians could have such technology, but he believed these materials together were meant to produce an electric charge. Archaeologists remain puzzled as to just what the Baghdad batteries were for. Their best guess is electroplating metals, but other possibilities, ranging from medicine to ritual magic, have been suggested. 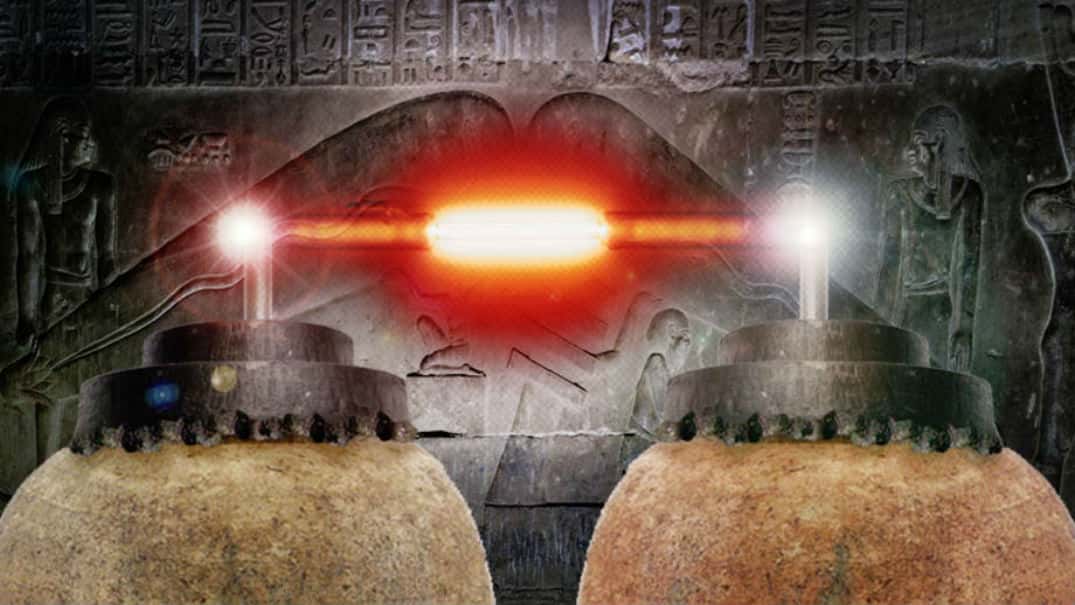 These strange items have been found scattered across the Roman empire and central Europe. They are hollow, with holes on each side and round knobs at every corner, and come in various sizes. The sheer number of them, and their widespread use, suggests that they were mass-produced, and possibly used by people who travelled a lot. But just what were they for? 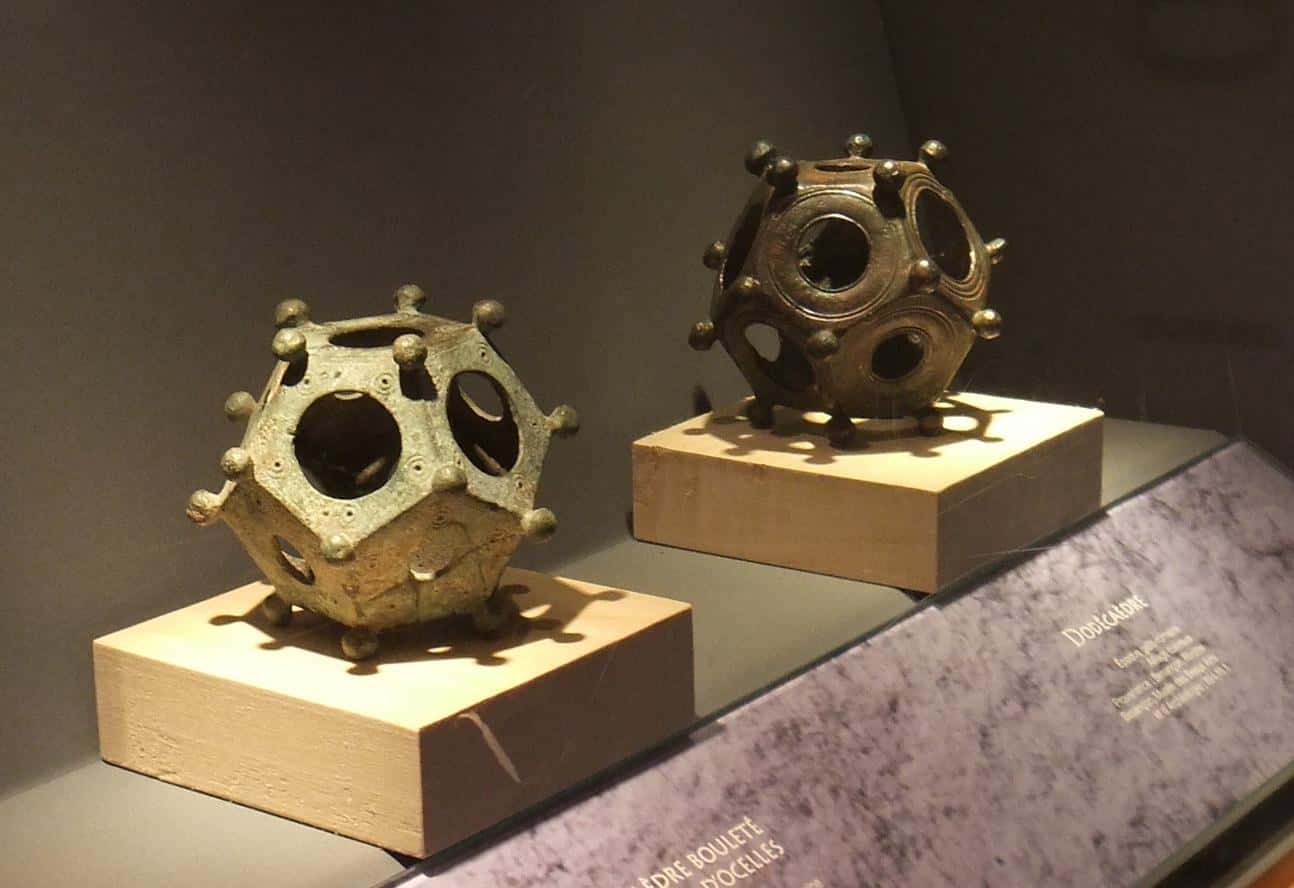 They’re like something out of Game of Thrones: a set of mysterious, and mysteriously strong, Viking swords, inscribed with the word ULFBEHRT. With over 170 of the swords in existence, and dating over a span of 200 years, it seems likely that ULFBEHRT was a brand rather than a single maker. But what is most surprising is the quality of the metal: whoever ULFBEHRT was, he (or they) knew how to make “crucible” steel, so pure it wouldn’t be replicated again until the Industrial Revolution. 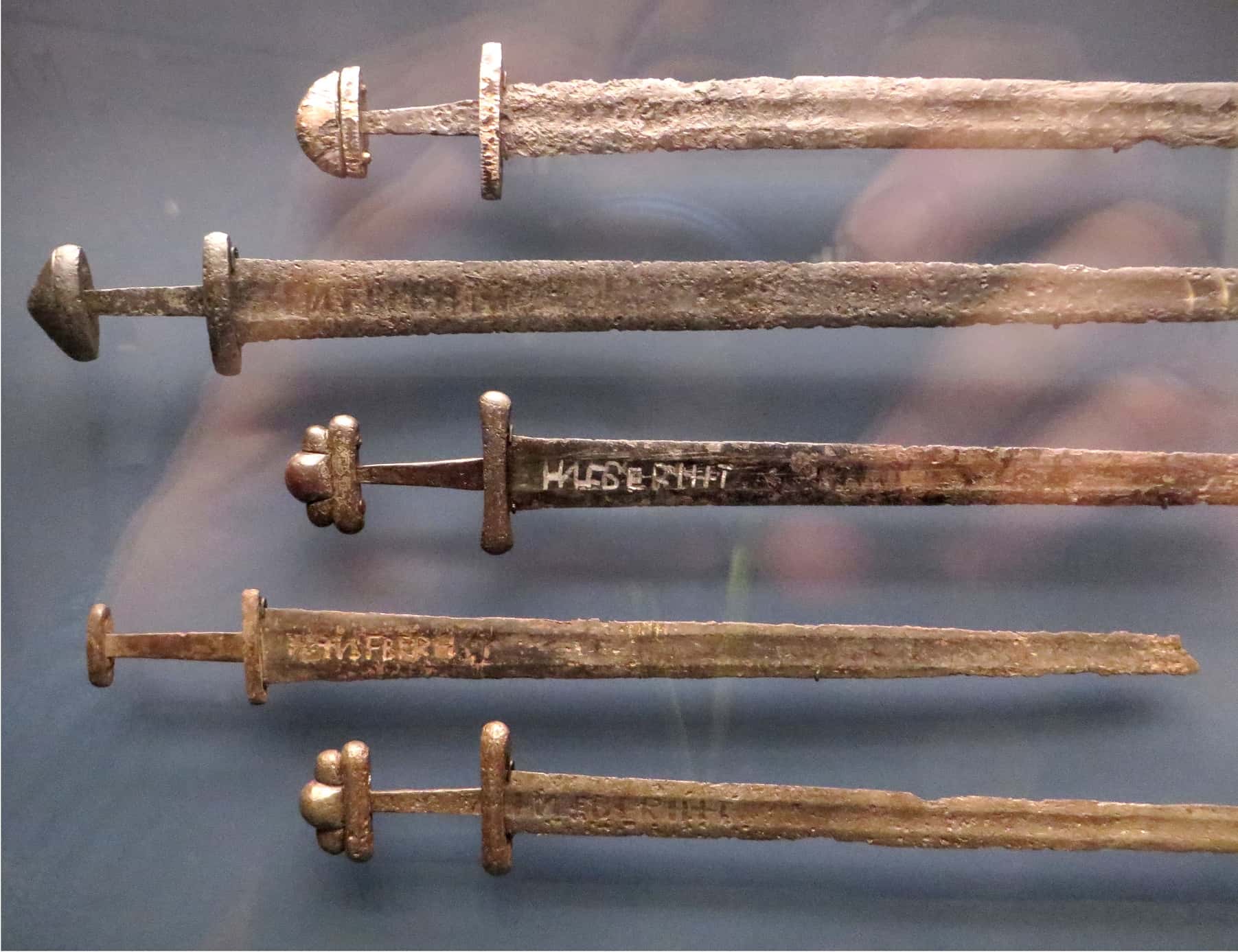 In the 17th century, few things worried the English people more than witches. Witches bore the brunt of the blame for everything from poor crops to ill health. And so they would combat witches through magic of their own. The only way to prevent yourself from suffering at the hands of a witch was the Witch Bottle: a small clay bottled filled with nails, hair, fingernails, and urine, and buried near the witch’s home. Archaeologists have since found several of these bottles all over England, and even a few in the United States. 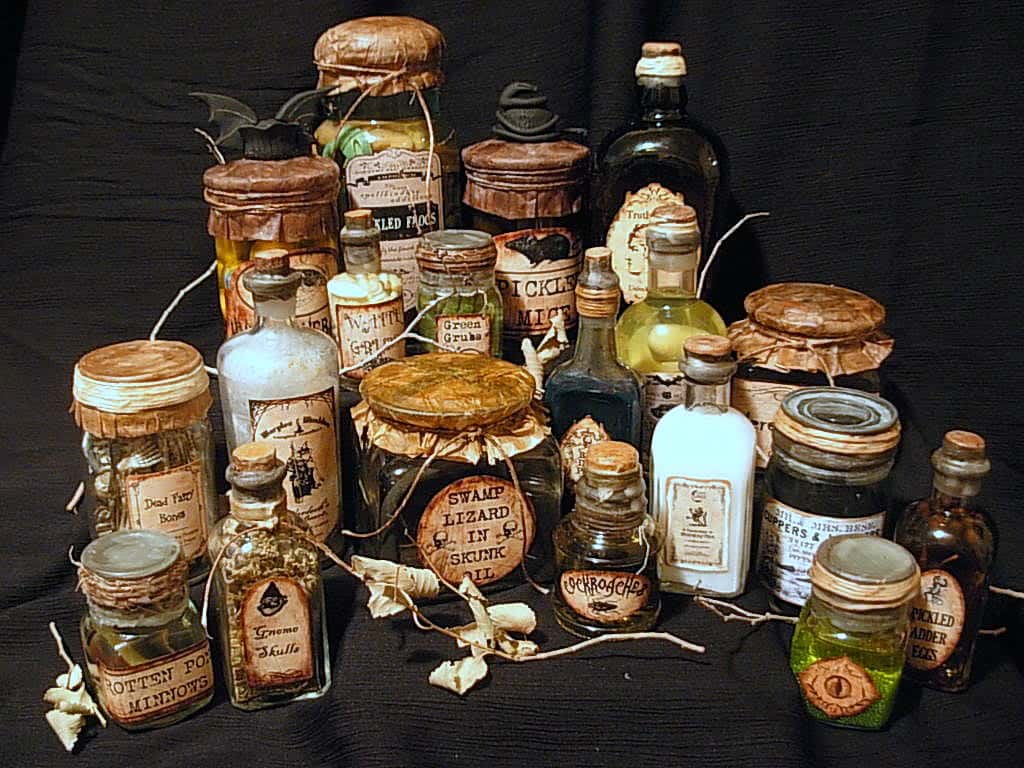 For almost one hundred years now, archaeologists at a site just west of Ur in southern Iraq have been uncovering mysterious 7,000-year-old statues of men, women, and women holding babies, all with a strange mixture of human and reptile characteristics. While many gods of Mesopotamia had hybrid human and animal characteristics, there’s nothing to suggest these statues, which have long snouts and almond-shaped eyes, were ritualistic figurines. 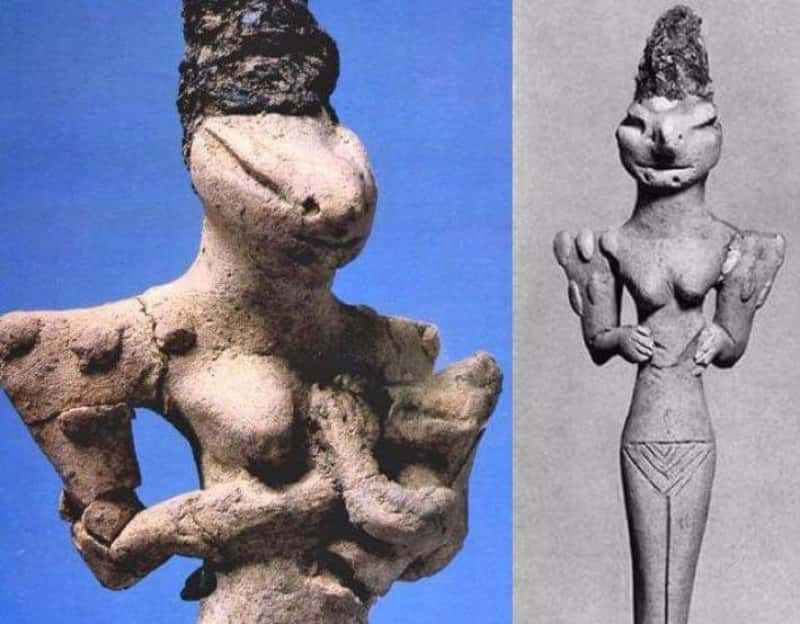 For years, scholars have puzzled over the Voynich Manuscript, a 15th century manuscript written in an unbreakable code and filled with mysterious drawings of plants. Researchers are still trying to piece together the code, and they have no idea who the writer (or writers) was, or what led them to make such a book. 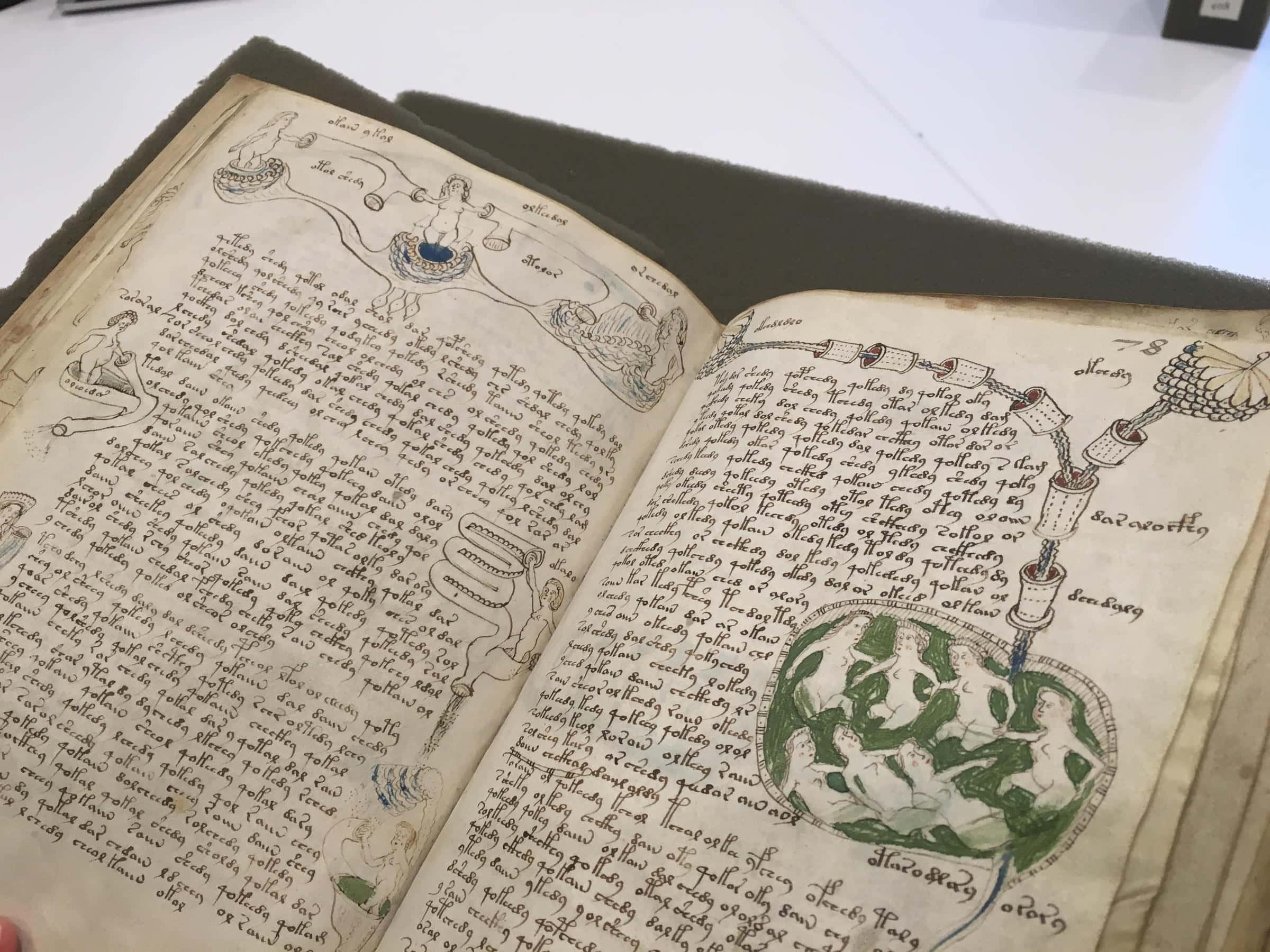 In 1957, a guy–Guy Mellgren, in fact–found an unusual object near Blue Hill, Maine: a Viking coin. The coin itself is not so unusual: the Smithsonian Institute confirms it is a real Viking coin, going so far as to call it “the only pre-Columbian Norse artifact ever found in the United States.” And there lies the mystery. There is no definitive evidence that the Vikings ever travelled further southwest than Newfoundland. Could the coin been passed, hand to hand, by First Nations and Native American traders? That seems the only reasonable possibility: there were 30,000 Native American artifacts found at the Blue Hill site, but only one Viking penny. 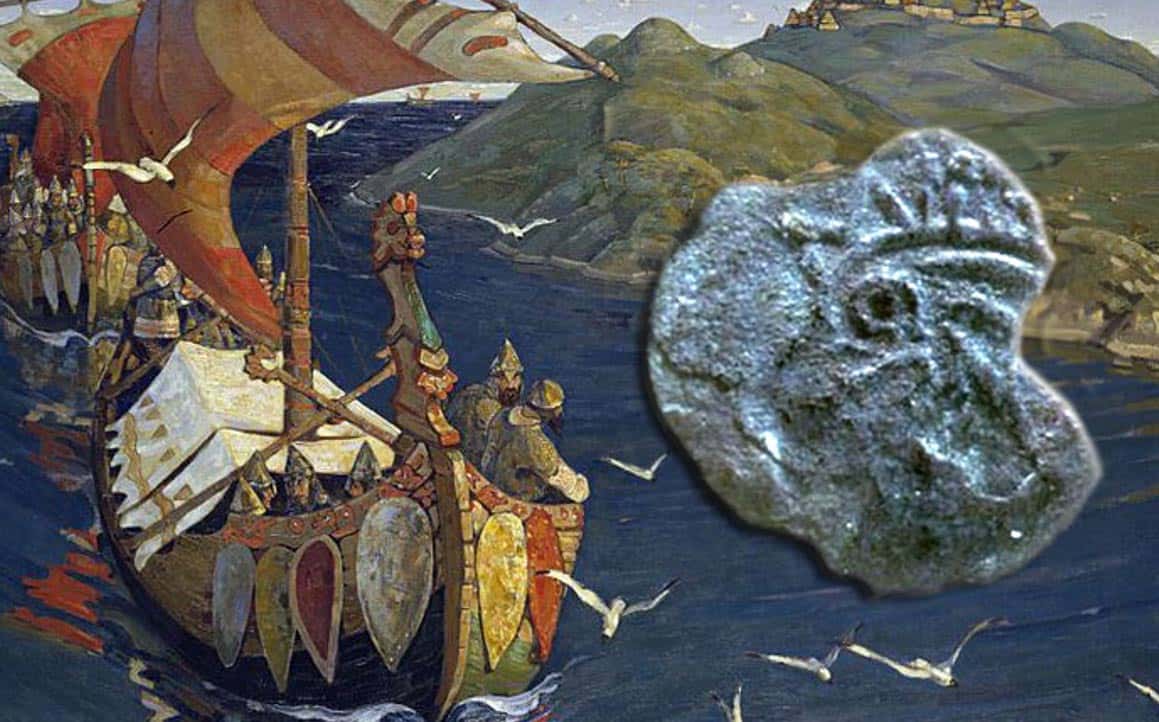 Almost a dozen so-called “bog bodies” have been pulled from bogs across western Europe. Dating to the Iron Age, the eerily-well preserved bodies are often dissected, or have leather ropes drawn tight around their necks and arms, suggesting a particularly violent end. Other times, they are accompanied by tools, weapons, and even food. No matter the confusing nature of the burials, archaeologists generally believe the bog bodies were victims (participants?) in ritual sacrifice. 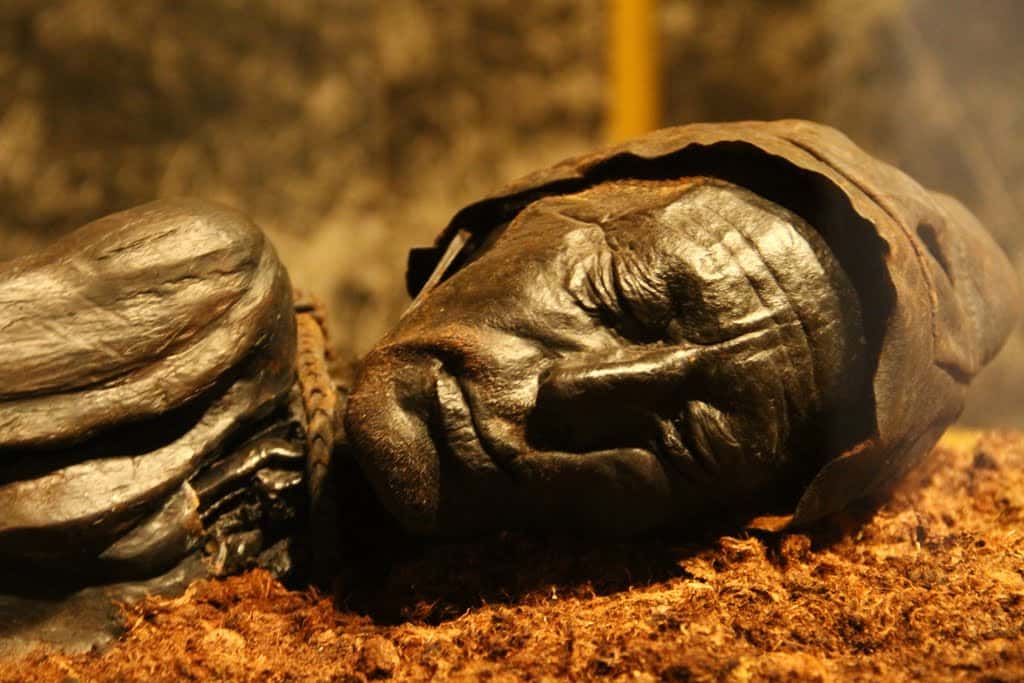 In 1974, a wedge-shaped object was found under 35 feet of sand and alongside two mastodon bones. The proximity to mastodon bones suggests the object is 11,000 years old. But when scientists studied the metal object further, they made a shocking discovery: it was made of aluminum, a metal not discovered until 1808. 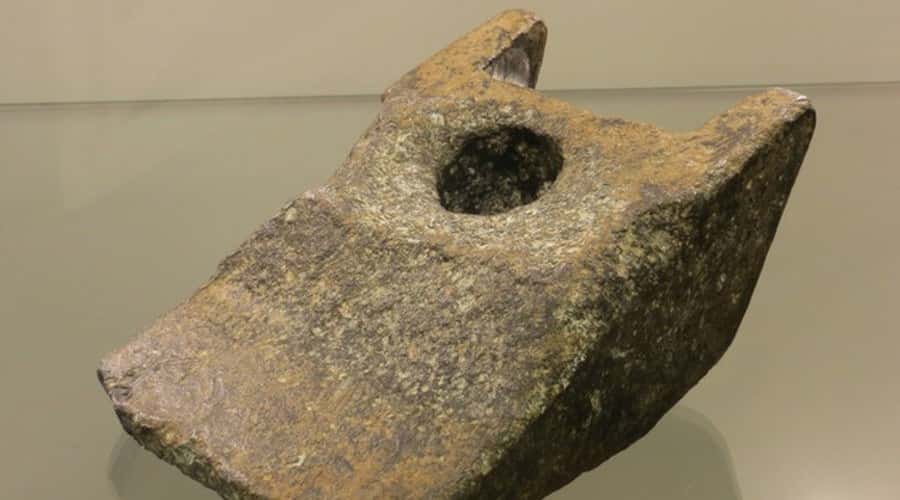 Uncovered by workers near Lake Winnipesaukee, New Hampshire in 1872, this egg-shaped object has been a source of speculation for over a hundred years now. Covered with abstract designs in different styles, but with a focal point that is very clearly a human face, it was originally suggested that the stone was meant to commemorate a peace treaty between Native American tribes. Most researchers remain skeptical, however, and the search for its real meaning continues. 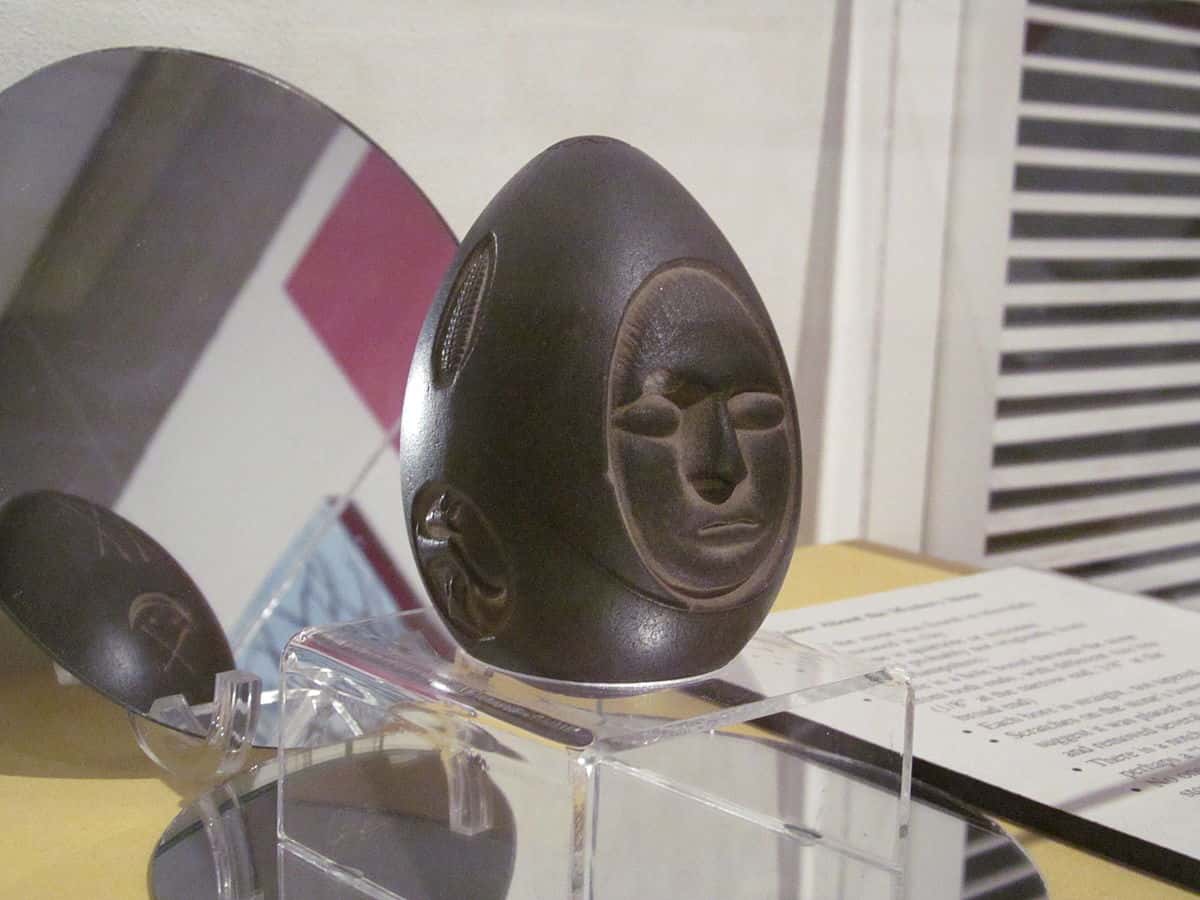 The Tecaxic Head looks like any normal bit of Classical sculpture. It is made of stone, with distinctly Hellenistic features and in a Roman style, and scientists have dated it back to antiquity, possibly as early as the 9th century BC. But when archaeologist José García Payón discovered this statue fragment in Calixtlhuaca, it was in a burial ground near Mexico City dating back only to 1476-1510 AD. 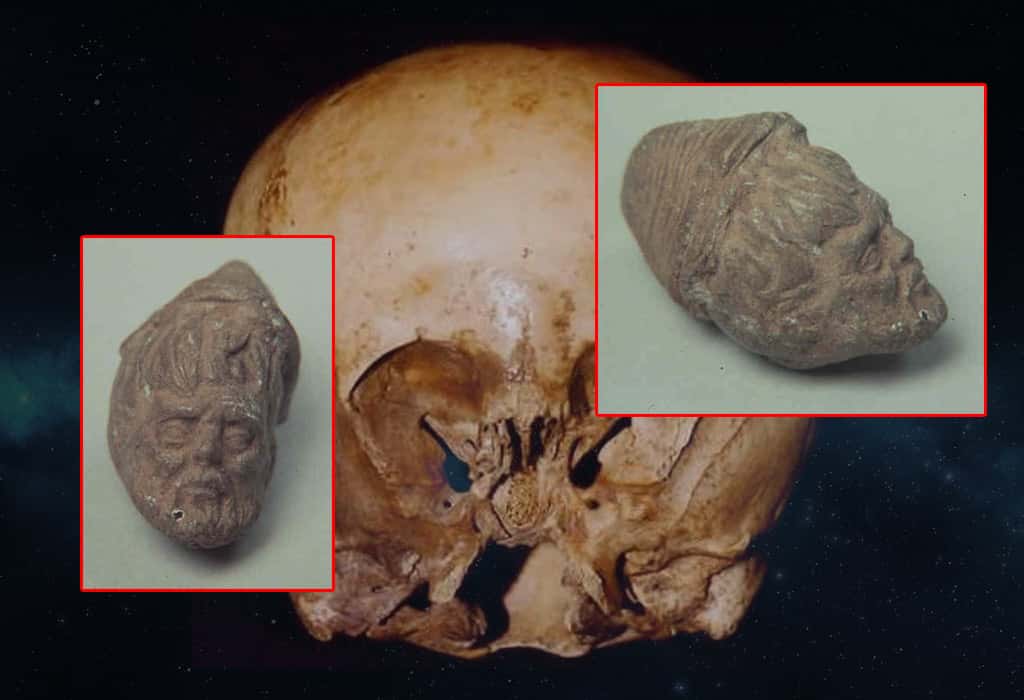 It took researchers years to figure out just how to read the Copper Scroll, a series of tightly-wound copper plates found among the Dead Sea Scrolls. When they did (by cutting it in half) they were shocked to find a list of treasures buried throughout the Holy Land. The descriptions of the sites were incredibly specific–too specific to ever be found. One reads “in the gutter at the bottom of the (rain-water) tank,” another, “in the water conduit of the north[ern] reservoir.” 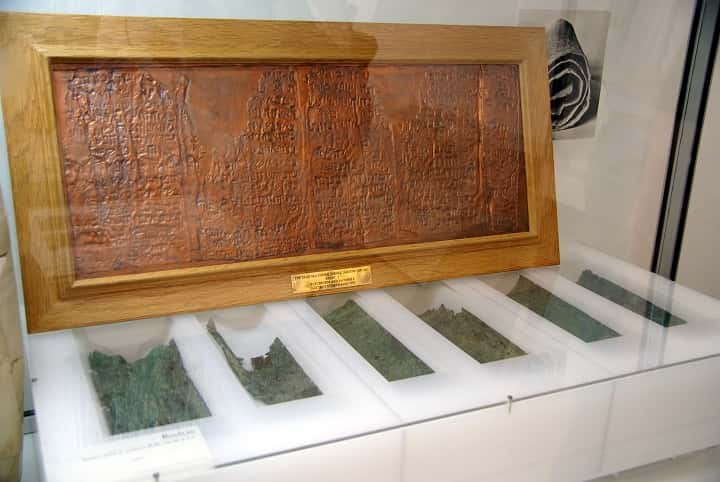 Very little is known about China’s ancient Sanxingdui culture, and their impact on China’s artistic evolution was largely unrecognized until 1986, when archaeologists found hoard of figures, carvings, and bells. The sculptures were cast in jade and ceramic, as well as some very advanced bronze, with an aesthetic that calls to mind the art of the Aztecs. Mysteriously, many of the ceramic figures found at the site had been deliberately smashed or defaced. 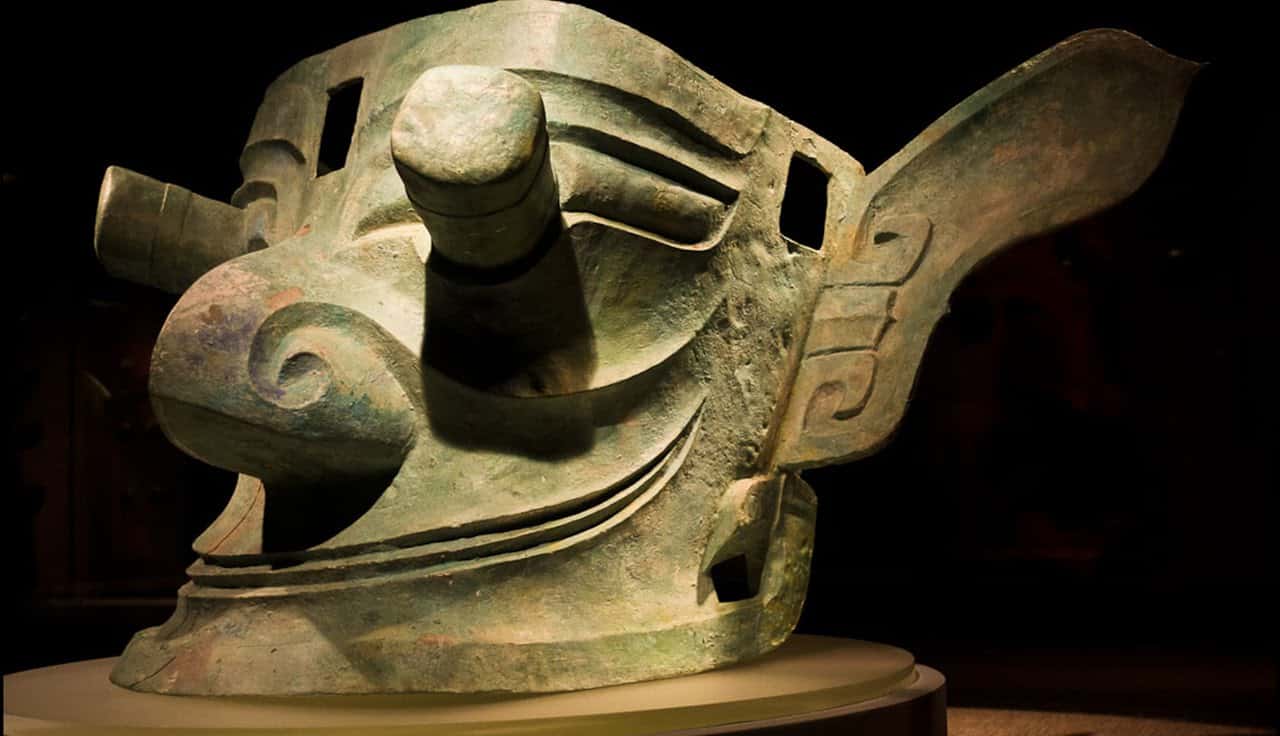 When a meteor struck Sri Lanka in 2012, scientists discovered something unusual about it. Embedded in the rock were tiny fossilized forms of algae. Scientists have recently hypothesized that life on earth was first carried here on just such a meteorite. Debate over the exact origin of the algae continues, but the Sri Lankan Meteorite could be one more step toward proving life exists beyond our world. 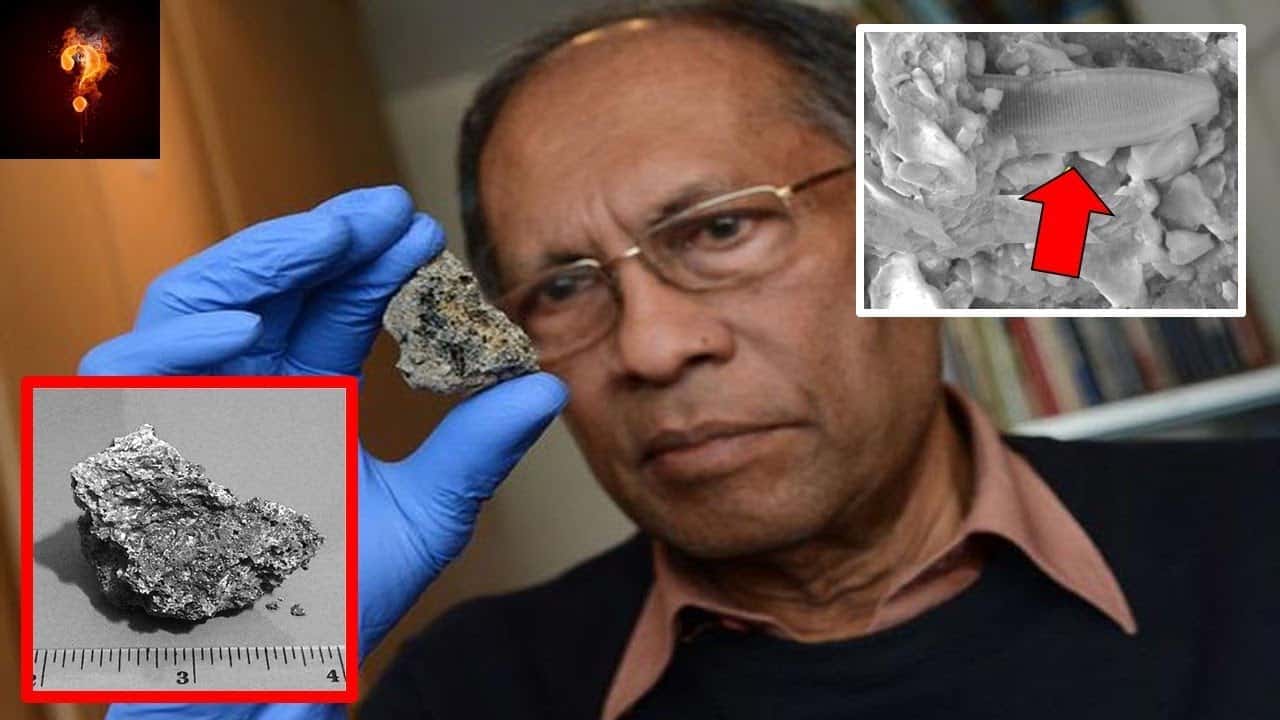 The Piri Reis map is a Turkish map dating to 1513. It features a remarkably accurate depiction of the eastern coast of North and South America, despite the Ottoman Empire having undertaken no real exploration of the Americas. It is thought that Piri Reis, the man who made the map, used a now-lost map from Christopher Columbus. 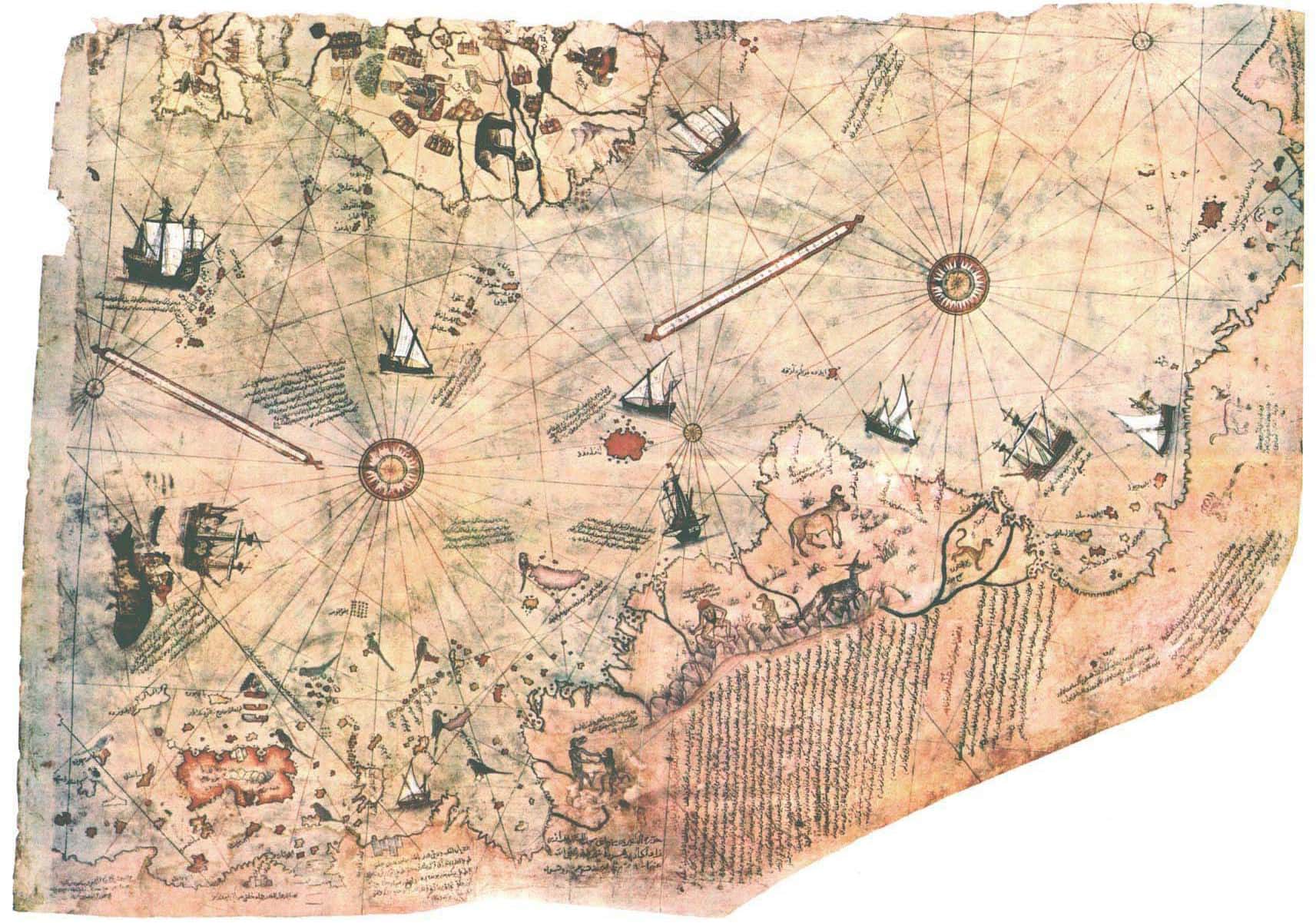 There is a well-documented history of Roman England, so it’s not unusual for a stray coin to turn up in the UK now and then. A whole hoard of Roman coins used only in Egypt but found in London, however, is a surprise. The coins, first discovered in 1908, were minted in Alexandria, and had no value outside the city. Maybe someone was going on holiday. 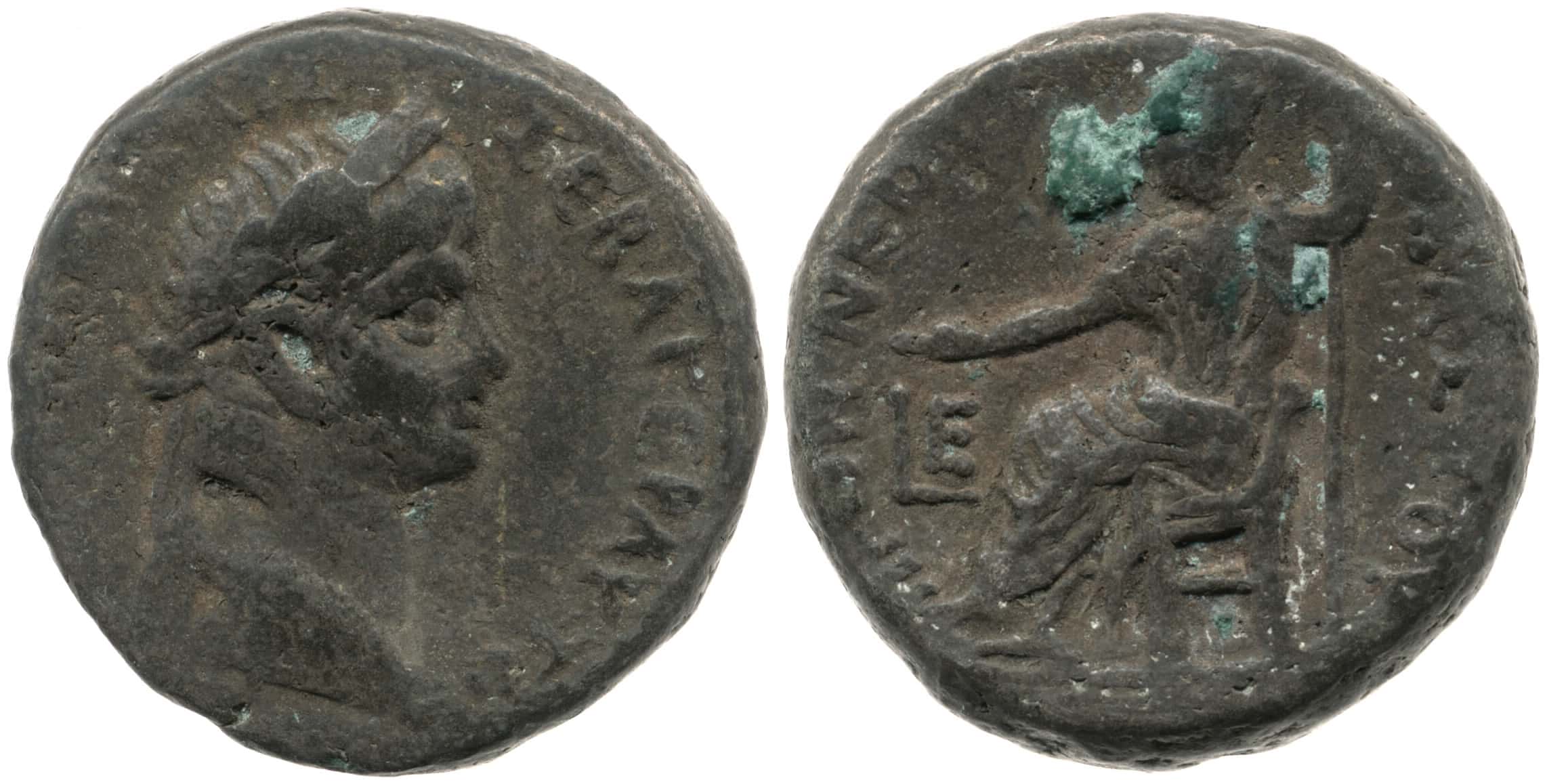 4. The Woman of the Seine

The body of young woman was pulled from the Seine River in Paris in the 1880s. While they never discovered who she was, or just what led to her death, replicas of her serene, pallid face became an extremely popular art piece in French homes. Young women even styled their hair and makeup after the Unknown Woman of the Seine. Her face has now spread around the world: hers is the face CPR dummies faces are modelled on. To this day, no one knows who the young woman was, even though her face is one of the best known in history. 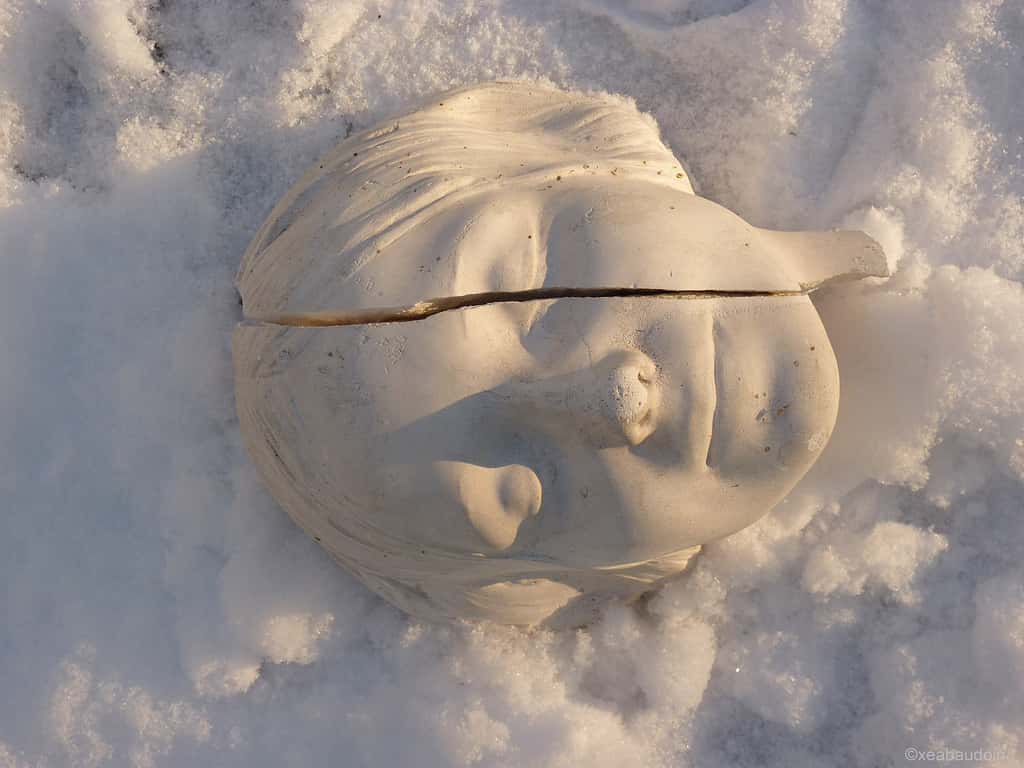 In 1936, a couple walking along Red Creek in London, Texas, found a wooden shaft protruding from a loose rock along a hillside. When the rock was broken open, it revealed an iron hammer head attached to the handle that had somehow gotten into a 400 million year old rock. Though archaeologists are skeptical of the London Hammer’s authenticity, Christian creationists have latched on to the artifact as proof of a pre-Flood society that coexisted with dinosaurs. The London Hammer is now on display in the Creation Evidence Museum in Texas. 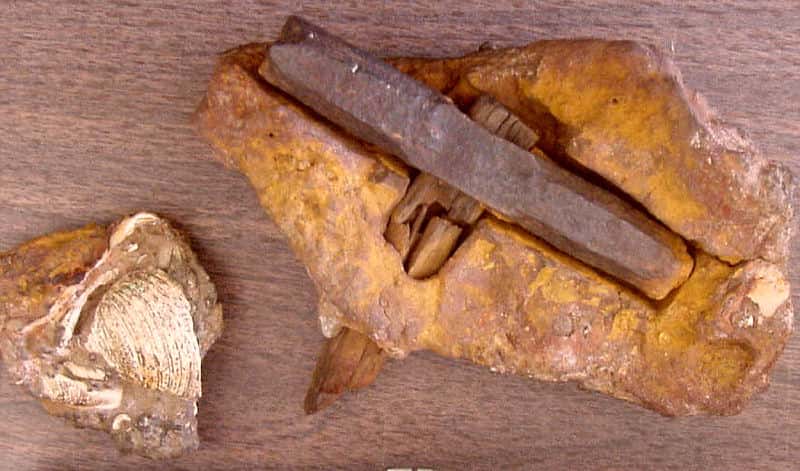 2. The Shroud of Turin

The famous Shroud of Turin is supposedly the burial shroud of Jesus Christ. Its ghostly, bearded face is perhaps the most famous holy relic in the Christian world. It has been tested again and again, with some researchers claiming it’s a hoax and others insisting on its authenticity, but never reaching a definitive conclusion. But now a new detail has been added to the mystery: according to researchers at the Institute of Crystallography in Italy, “The consistent bound of ferritin iron to creatinine occurs in human organism in [a] case of a severe polytrauma.” In layman’s terms? The blood on the Shroud came from someone who had been tortured. 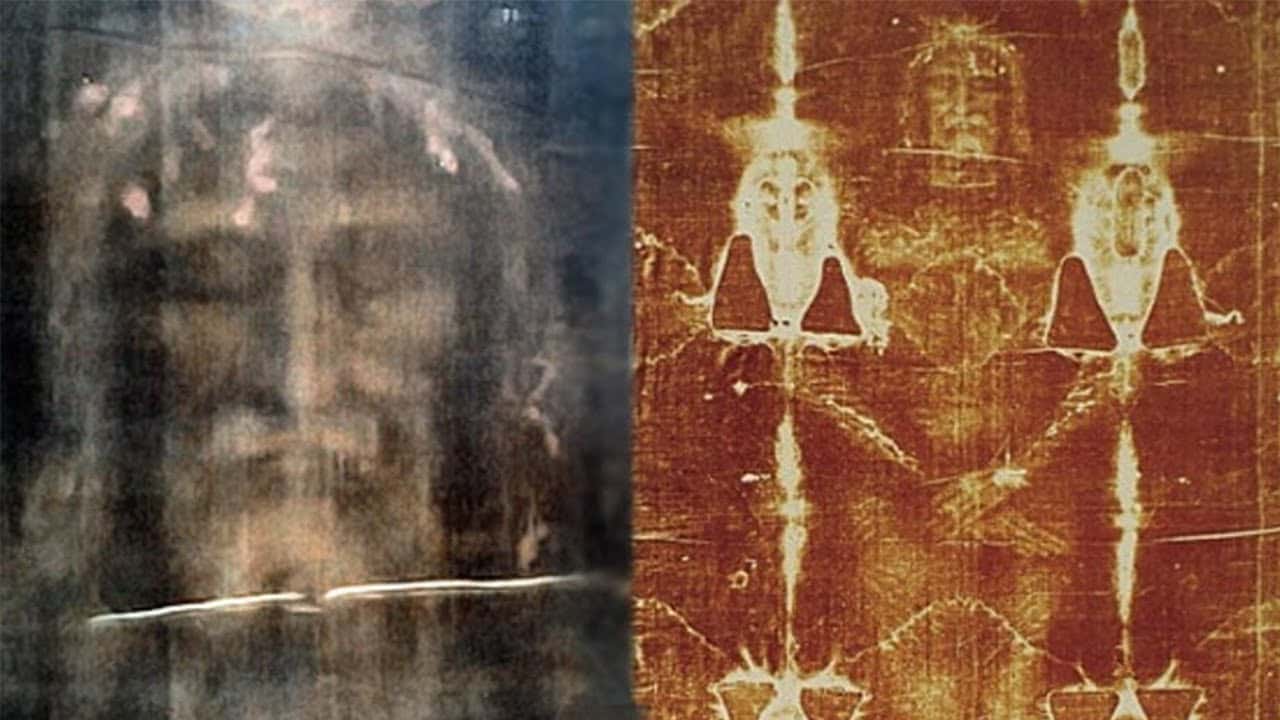 In December, 2014, the Arts House of the Old Parliament in Singapore displayed the Mona Lisa. No, not that one: This is a version of the Mona Lisa whose owners allege was painted by da Vinci earlier than the famous portrait. While most have dismissed the claim, some historians have pointed out that da Vinci would often paint parts of portraits, leaving his students to fill in the rest. 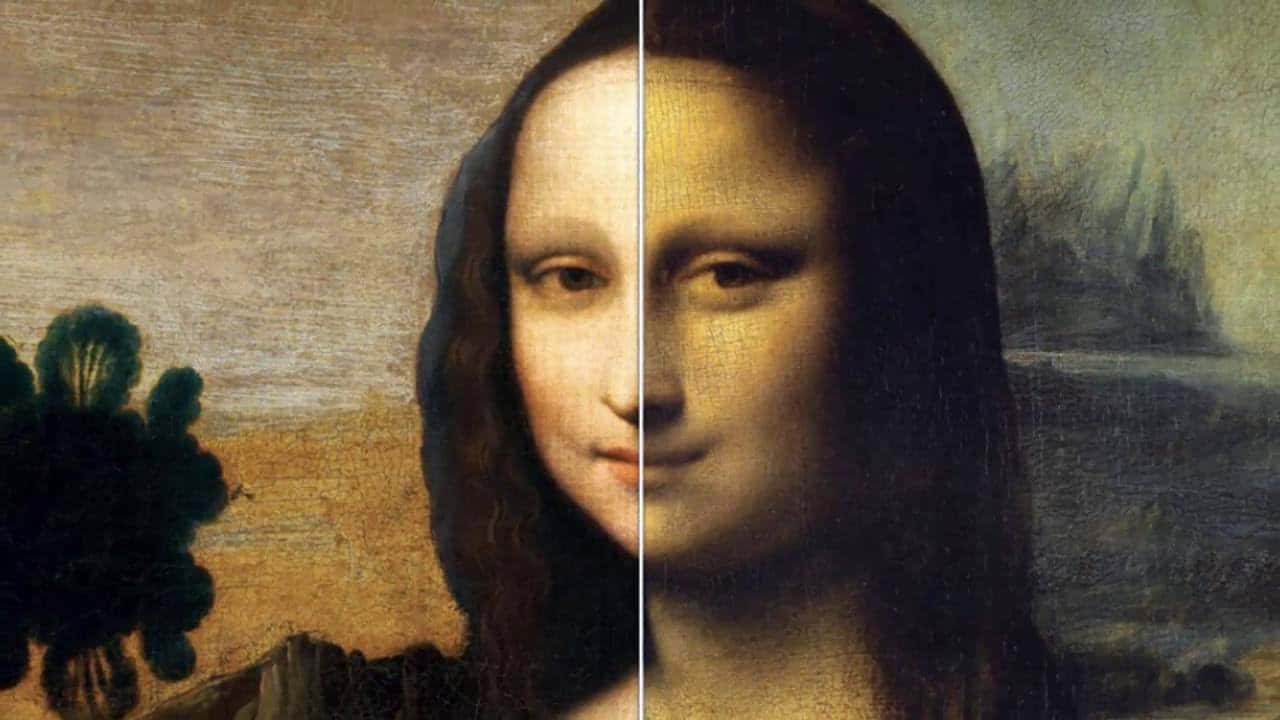