Say Hello To These 30 Little Facts About Al Pacino

Say Hello To These 30 Little Facts About Al Pacino

“Say hello to my little friend!”

How do you like your Pacino? Maybe as the chilling Michael Corleone in one of the greatest movies ever made? How about the psychotic drug lord Tony Montana? Frank Serpico, the undercover cop who got in too deep? Shall I go on? In a career spanning five decades, Al Pacino has starred in countless iconic roles for both the screen and stage, and his powerful and often intense performances are always memorable. Here are some facts of one of the all-time great American actors.

The lives and careers of Pacino and Robert DeNiro have been closely intertwined. Both are actors of Italian-American heritage that were born in New York City in the 1940s. Both came of age in the 1970s, a decade that started out with a then-unknown DeNiro losing the role of Michael Corleone to Pacino. They were co-stars in The Godfather Part II, but did not share any scenes. They would finally become scene partners when they starred in Michael Mann’s 1995 film Heat. They would go onto co-star in 2008’s Righteous Kill and the upcoming Martin Scorsese film The Irishman.

Throughout the course of his career, Pacino has collaborated with many projects helmed by playwright and director David Mamet. He starred in the film adaptation of Mamet’s play Glengarry Glen Ross playing the part of Ricky Roma and played the titular controversial music producer the Mamet-directed HBO film Phil Spector. He has also appeared in productions of plays written by Mamet including American Buffalo, China Doll, which Mamet wrote with Pacino specifically had in mind, and Glengarry Glen Ross, 20 years after starring in the film version, this time playing Shelley Levene.

Alfredo James Pacino was born on April 25, 1940 in East Harlem, in the borough of Manhattan in New York City. Pacino’s formative years were spent in another borough of the Big Apple—the Bronx, where he moved to with his mother following the divorce of his parents when he was just two years old.

Both of Pacino’s two Emmy wins were in the Outstanding Lead Actor in a Miniseries or Movie category for performances as real-life people. His first Emmy came for his performance in the HBO adaptation of Tony Kushner’s play Angels in America, where he played controversial lawyer Roy Cohn. His second came in another HBO production, You Don’t Know Jack, where he played notorious physician Jack Kevorkian.

Pacino was an unexpected choice for the part of Michael Corlone in The Godfather. He was still very much an unknown in Hollywood. Pacino beat out the likes of more established stars like Warren Beatty, Robert Redford, and Jack Nicholson to play the iconic role. The decision to go with Pacino was not a popular one amongst the film’s producers.

24. Student of the Craft

Pacino was a student of the Herbert Berghof Studio acting school in New York City. One of his teachers at HB, Charlie Laughton, would go on to become Pacino’s best friend. After four years at HB, he joined the renowned Actors Studio, where he learned the principles of method acting under famed acting teacher Lee Strasberg.

Even after completing his formal training at the Actors Studio, Pacino maintained close ties with his mentor Strasberg. Pacino reunited with Strasberg in the films The Godfather Part II and …And Justice for All.

Since 1994, Pacino, with fellow actors Harvey Keitel and Ellen Burstyn, have been the Presidents of the Actors Studio. That is quite the rise to the top, considering that Pacino was initially rejected by the Actors Studio when he was a teenager.

Pacino’s penchant for intense line deliveries makes him a perfect actor to play a football coach riling up his players. He has played a football coach twice in his career. The first was in Oliver Stone’s Any Given Sunday, where Pacino played Coach Tony D’Amato of the fictional Miami Sharks. More recently, Pacino starred in the Barry Levinson-directed HBO film Paterno, playing the real-life legendary and later embattled longtime coach at Penn State, Joe Paterno.

With an Emmy, Oscar, and Tony under his belt, Pacino is only a Grammy Award away from completing the illustrious EGOT. Someone needs to make a Pacino spoken word album a reality!

Al Pacino has been nominated for eight Academy Awards in his career. He won his one and so far only Oscar in the Best Actor category for his performance in the 1992 film Scent of a Woman. His other nominations include Best Actor nods for Serpico, The Godfather Part II, Dog Day Afternoon, and …And Justice for All, and Best Supporting Actor nods for The Godfather, Dick Tracy, and Glengarry Glen Ross.

Pacino skipped the 45th Academy Awards ceremony, where he was nominated for Best Supporting Actor for his performance in The Godfather. Despite it being his first nomination, Pacino refused to attend as he felt that he should have been nominated in the lead category. His co-star Marlon Brando actually won the Best Actor award that year, but famously refused to accept it due to Hollywood’s treatment of Native Americans.

Pacino dropped out of high school at 17, a decision that disappointed his mother and ultimately, led to Pacino leaving the family home. To support himself and his acting training, Pacino took on odd jobs as a messenger, janitor, busboy, postal clerk, and mail room employee at Commentary magazine.

Pacino’s first on-screen acting appearance was on an episode of the ABC television police drama N.Y.P.D. The episode premiered on November 12, 1968 and also featured his then-girlfriend, actress Jill Clayburgh.

Pacino’s first movie role was a small part in the 1969 film Awake and Sing. His first lead role came two years later in the 1971 film The Panic in Needle Park. His performance garnered a lot of attention, most notably from director Francis Ford Coppola, who would go on to cast Pacino in The Godfather films.

Pacino is part of a small group of actors who have been nominated for two Academy Awards in the same year. At the 65th Academy Awards, Pacino was nominated in the lead category for Scent of a Woman, which he ended up winning, and in the supporting category for Glengarry Glen Ross. The other actors to accomplish this rare feat are Fay Bainter, Teresa Wright, Barry Fitzgerald, Jessica Lange, Sigourney Weaver, Holly Hunter, Emma Thompson, Julianne Moore, Jamie Foxx, and Cate Blanchett. Not bad company! 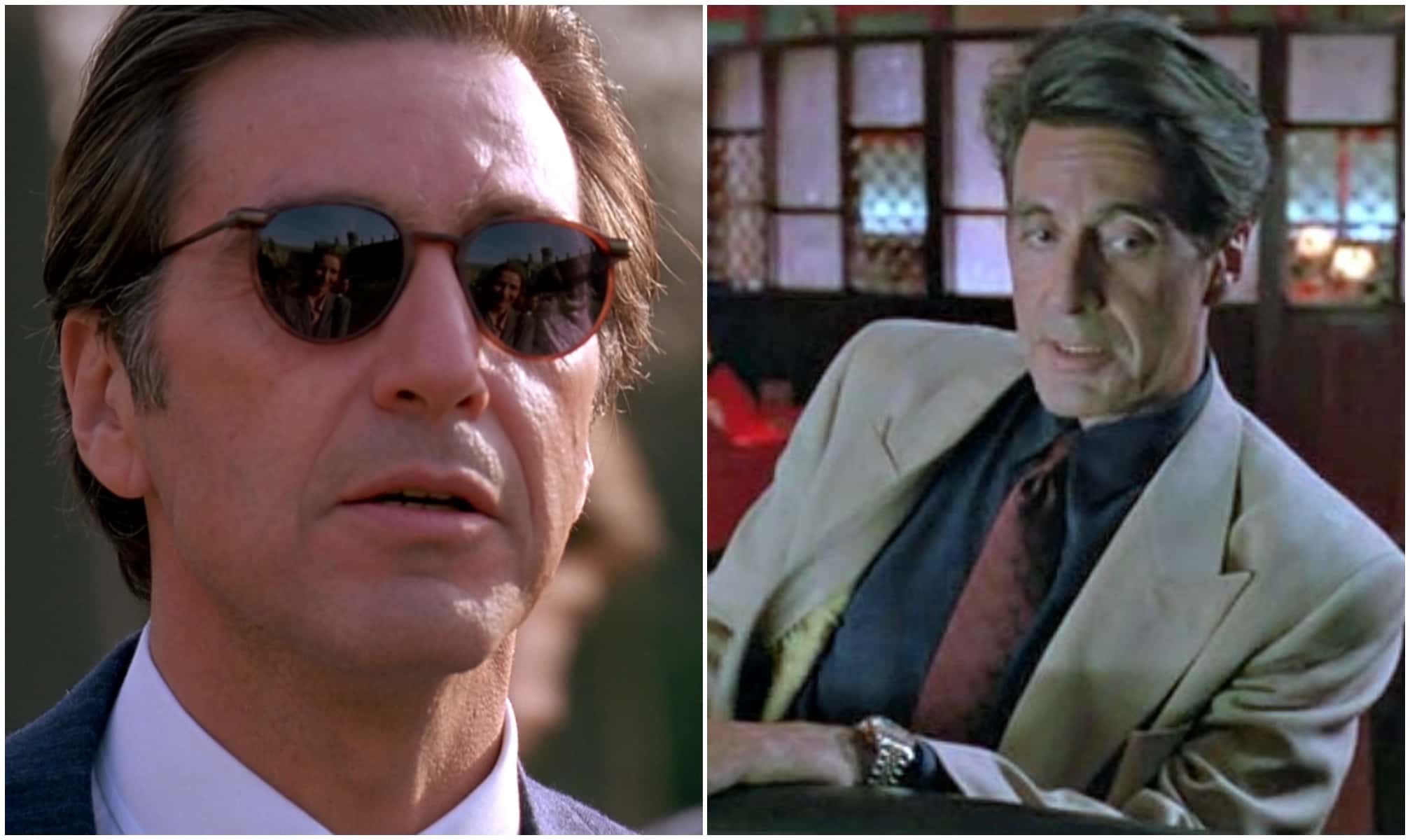 In addition to his acting, Pacino has also taken a stab at directing movies. He has directed two films that blend documentary and scenes from a theatrical performance. These documentaries are Looking for Richard (1996), where Pacino also plays the title role of Richard III, and Wilde Salomé (2011), where Pacino also plays Herod in scenes from Oscar Wilde’s play Salomé. In 2000, Pacino also directed the film adaptation of Ira Lewis’ play Chinese Coffee.

11. Scent of a Committed Actor

Pacino spent a lot of time getting the part of Frank Slade right in Scent of a Woman. To play the blind and retired army officer, Pacino worked with people from a school for the blind. Even when not filming, Pacino would use the character’s cane and would avoid eye contact during conversations.

In a career full of iconic lines, one of Pacino’s most famous was actually unscripted. In the 1975 film Dog Day Afternoon, his character’s chanting of “Attica!” was improvised. Pacino has said that the line was inspired by a suggestion from assistant director Burtt Harris.

Pacino once took a four-year hiatus from acting in movies. The hiatus came as a result of the 1985 critical and commercial flop Revolution. Pacino spent part of the hiatus back on stage, including a stint in a production of Shakespeare’s Julius Caesar.

Pacino started his stage career during the 1967 season at the Charles Playhouse in Boston. He performed in the plays Awake and Sing! and America, Hurrah. He would move back to his native New York later in the ‘60s, where his performances in the productions The Indian Wants the Bronx and Does a Tiger Wear a Necktie? attracted critical praise. For the former he won an Obie Award and for the latter he won his first Tony.

Pacino has won numerous accolades throughout his illustrious career. However, one award that he probably isn’t so proud of is his Razzie “win” for Worst Supporting Actor in the critically panned 2011 film Jack and Jill. In the movie, Pacino actually plays himself.

Over the years, Pacino has turned down many notable film roles that would go onto become iconic cinematic characters. These roles include the role of Roy Neary in Close Encounters of the Third Kind, Han Solo in Star Wars,  and Ted Kramer in Kramer vs. Kramer.

4. Problems on The Godfather Part II

Pacino posed quite a few issues during the filming of the second installment of The Godfather saga. He requested both a pay raise and changes to the script in order to commit to the part. Writer and director Francis Ford Coppola worked around the clock to revise the script to Pacino’s approval and get the production started on schedule.

One of the best examples of Pacino’s commitment to method acting is his performance in the 1973 film Serpico. Pacino spent a lot of time with the real-life Frank Serpico, in order to get the part of grizzled police officer just right. They even stayed together in a rented home in Montauk, New York. His dedication to the character even led him to pulling over a truck driver due to the exhaust pollution coming from his rig.

During the filming of Scarface, Pacino picked up a gun by the barrel that was just used to fire blanks. As the barrel was still very hot, Pacino sustained burns to his hand. The burn was so severe that production had to be shut down for a couple of weeks to give time for Pacino to heal and recover.

The Louis Restaurant scene in The Godfather serves as a pivotal moment in the film as it truly initiates Michael into the world of crime. The scene was equally pivotal for Pacino himself. The executives at Paramount were not happy about his work and were considering recasting the part. However, Pacino’s incredible and nuanced performance in the restaurant scene won the executives over and they thankfully decided to leave Pacino to do his thing.

Henry Gomes is a writer at Factinate.