For a classically-trained ballerina who started out by appearing in costume dramas, Swedish leading lady Alicia Vikander sure can kick some butt. While she made her name appearing in serious period pieces, since then she’s burst onto the scene as an action heroine. With memorable roles in films like Ex-Machina and The Danish Girl, Vikander is set to stay in demand in Hollywood with her new role as Lara Croft in the new Tomb Raider. Since moviegoers will likely be seeing her in a lot of other roles in the future, here are 24 action-packed facts about Alicia Vikander.

Vikander is married to another star also lauded for his dramatic performances, Michael Fassbender. And like his wife, he dips his toe into the action genre as well—he’s perhaps best known for his role as Magneto in X:Men First Class, Days of Future Past, and Apocalypse. Derek Cianfrance, who directed them together in The Light Between Oceans, likened the couple to basketball greats Scottie Pippen and Michael Jordan, “They were going to make one another better. And they were better together.”

Vikander won a Best Supporting Actress Oscar in 2016 for her role as Gerda in The Danish Girl. Alicia’s mom inspired Alicia to get into acting, and watched proudly from the live audience as Vikander accepted her award. She also thanked the transgender community, crediting them for helping her to make her character more believable, since the role that she portrayed was that of a woman who was married to a man who became the first recipient of gender-reassignment surgery. When she won, Vikander also became the first Swede to win an Oscar since Ingrid Bergman in 1975.

Vikander did most of her own stunts for Tomb Raider.

Vikander states that Hollywood was “like a rumor for her,” or a “window onto another universe.” She never dreamed that she would get to be part of it. She said that she used to watch the Oscars with her mom, waking up at 2AM in Sweden so that they could watch it together, and both her and her mother found it hard to believe that they were actually attending the Oscars.

Vikander was cast in a mini-series when she was 16, and became interested in pursuing a career as an actor. Unfortunately, she was rejected by her local drama school in Sweden and decided to apply to law school instead. Not bad for a consolation prize, career-wise.

Vikander’s role in Burnt was Harvey Weinstein’s idea, since he was a huge fan of her work. Let’s hope that was all he was a fan of.

17.  The Girl With the Magic Mirror

Upon moving to London to pursue English language roles, Vikander unsuccessfully auditioned for both Snow White and the Huntsman and The Girl with the Dragon Tattoo. Vikander also had unsuccessful auditions for a number of American TV pilots. I, for one, thought she was in the Swedish version of The Girl with the Dragon Tattoo, but I guess there’s more than one leading lady in Sweden. 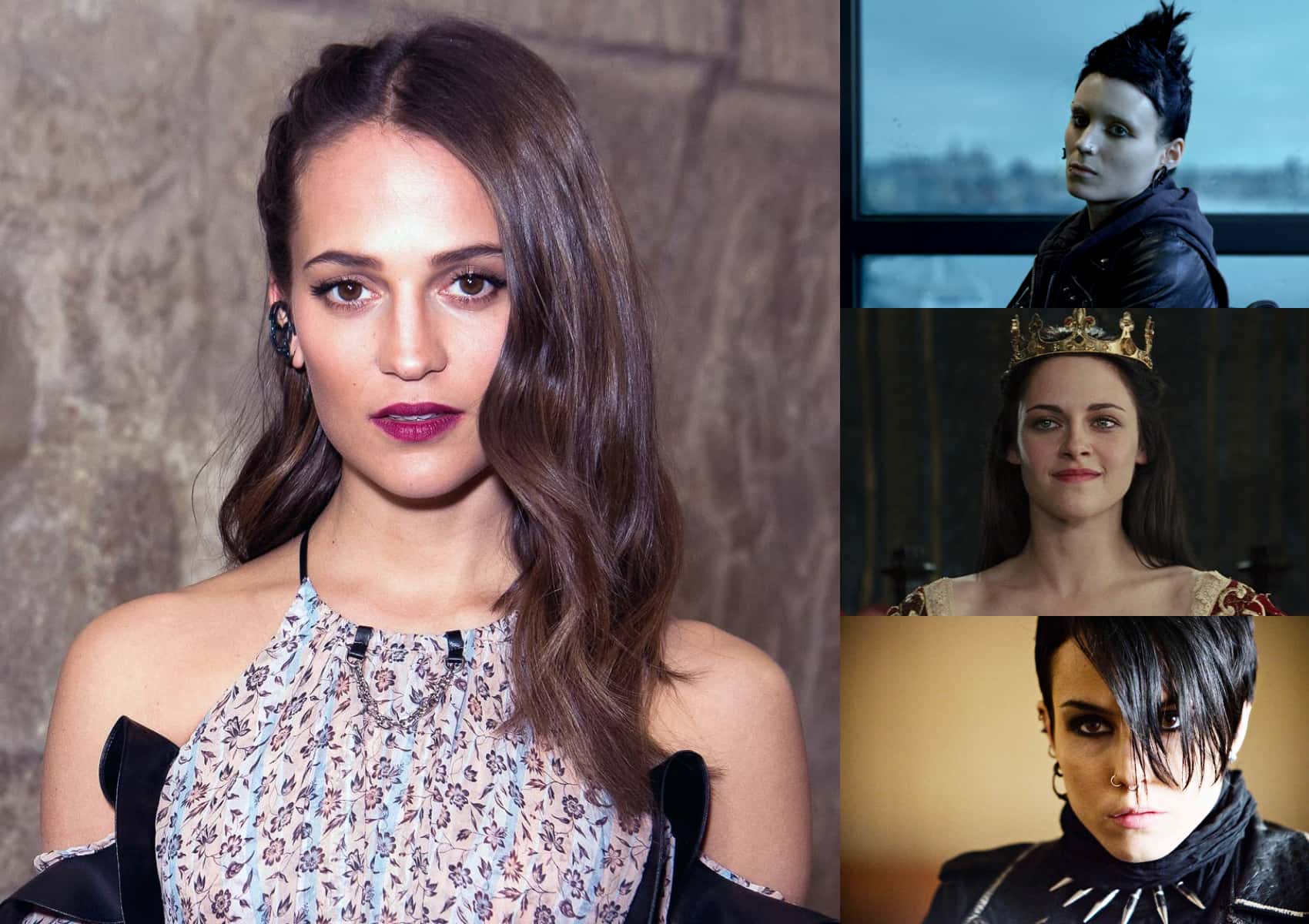 Vikander is part Finnish via her maternal grandmother, who came to Sweden in the early 1940s.

As part of the audition process for The Danish Girl, director Tom Hooper invited Vikander to read a scene with Eddie Redmayne. By the end of the reading, Hooper was in tears; “Eddie saw me crying after the scene ended, and he said to me later, ‘Well, there’s no great suspense around who you’re going to cast.”

The makeup crew for The Danish Girl wanted Vikander’s skin tone to mirror the skin tone of the real-life person she was playing, Gerda Wegener, who was pale with blonde hair and blue eyes. In contrast, Vikander is an olive-skinned brunette. The makeup departments had requested that Vikander wear SPF 100 sunscreen—the regular strength is SPF 15 or 30—and wear long sleeves so that less skin needs to be made pale.

In 2015, The New York Times stated that Vikander’s media personality was “The Thinking Man’s Blake Lively.” Um, ouch! Sorry, Blake Lively—don’t know what you did to the Times but it must have been bad.

Swedish is Vikander’s first language but she also learned some Danish over the course of 8 weeks for her role in Danish film, A Royal Affair. Vikander then moved on to tackling English when she moved to London.

Vikander and Michael Fassbender had a private wedding on famed party island Ibiza. The wedding managed to evade most press scrutiny, with only a few grainy pictures and sparse details making their way to the public.

Vikander bought an apartment in northwest London in 2013, and loved to fully embrace the culture of Great Britain, including stereotypical things like “the opera, high tea, and getting in a black cab.” Tally ho, Alicia!

Vikander became the new face of Louis Vuitton in 2015. The label’s artistic director, Nicolas Ghesquière, was impressed by Vikander’s film range and knew that she could express the same range in his ad campaign. He was even more confident in his choice after Vikander showed up to a shoot in Barcelona on the back of a motorcycle.

Vikander was born and raised in Gothenburg, a colorful seaside city in Sweden known for its Amsterdam-esque canals and tree-lined boulevards.

While filming Tulip Fever, Vikander realized that she had done five films in a row without filming a scene with another woman: “I felt so embarrassed that I hadn’t realized that earlier. Women talking together—apparently it is a reality! Who knew? And while we talk about the lack of female leads in films today, male domination is just as strong in supporting roles.”

5. Rumors of My Divorce Have Been Greatly Exaggerated

Vikander is more than familiar with the power of tabloids and Hollywood gossip after once seeing a tabloid circulating the story that she broke up with her then-boyfriend, Michael Fassbender. Since this experience, Vikander has been more careful to avoid discussing her private life.

When she first moved to London, Vikander shared a flat with Caroline Hjelt and Aino Jawo, of the Swedish pop duo Icona Pop. The Swedish ex-pats lived together in a two-room flat in Portobello Market. The early days weren’t glamorous at all—the apartment had no space, and insects ran rampant in the kitchen.  Oh yeah, another Swedish pop singer, Tove Lo, was the fourth roommate.

As part of a “play-date” for an interview, Vikander went skydiving with one of her interviewers. However, Vikander has “no recollection of that free fall.”

If Vikander didn’t become an actor, she might have been a ballet dancer. She trained at the Royal Swedish Ballet school from the age of 9 to 18. Vikander mainly credits the rigorous training and ultra-focused lifestyle for her decision to quit, citing the intense training schedule and the possibility of injuries that could likely have ended her career early. Vikander also credits her experiences with ballet for helping her through the task of gaining 10 to 12 pounds for her role in Tomb Raider. “Nothing is going to be harder than ballet!”

Vikander’s first film role in the Swedish film Pure in 2009 acted as a form of catharsis for the actress, who was dealing with issues of poor self-image and anxiety after years of ballet training. Eventually, Vikander’s battle with self-doubt led her to seek therapy.