When Sacha Baron Cohen entered the comedy scene, he uprooted trends and changed the direction of the genre. His commitment to character is vital, but it hasn’t always been smooth sailing for the controversial comedian. Here are 24 outrageous facts about Cohen’s truly outrageous movies.

Sacha Baron Cohen has stated that he grooms himself for each role separately. Borat takes 6 weeks of growth to produce the necessary mustache and body hair, Ali G takes 4 weeks of facial hair growth, and for Brüno, Cohen obsesses about cleaning his body, waxing himself, and working out.

Cohen was denied access to shoot at the United Nations during the filming of The Dictator. Cohen claims that their explanation to him was, “we represent a lot of dictators, and they are going to be very angry by this portrayal of them, so you can’t shoot in there.”

The character of Admiral General Aladeen pulls from many different real-life dictators, such as Muammar Gaddafi and his all-female virgin bodyguards, as well as Fidel Castro and his finger pointing during speeches.

The government house of The Dictator is tailored after Argentina’s Pink House, and the exterior scenes of the Wadiya Palace were actually filmed in Seville, Spain at the Plaza de Espana. Computer graphics were added in after the filming to create the golden domes.

Do you know your geography? The Republic of Wadiya is not a real country, but when it is shown on a map in the film, it takes place of the actual country of Eritrea, which lies on the coast of the Red Sea in East Africa, bordered by Sudan and Ethiopia.

The Coen brothers aren’t the only Co(h)en brothers in the entertainment industry. Sacha Baron Cohen’s older brother is composer Erran Baron Cohen, and the two have collaborated together since the origin of Sacha’s character in Da Ali G Show.

During the filming of Borat, the FBI received so many complaints in regards to a terrorist traveling throughout the United States in an ice cream van that they opened up a file on Cohen’s Kazakh character.

The filming of Brüno had to be paused after Cohen broke his foot while making an escape from a Kansas hotel; the manager called the police upon seeing the extreme S&M gear inside Cohen’s room. After jumping in front of people in his thong and a pair of heels, he was ushered into a van and driven directly out of the state.

While filming Brüno, Cohen was banned from Milan Fashion Week, and press releases were distributed to have people be on the lookout for Brüno. This didn’t stop Cohen though, and he smuggled himself into the fashion show of Agatha Ruiz De La Prada by pretending to be an Italian photographer. After crashing the event as Brüno, he was promptly arrested and detained for long questioning.

After the risky cage fighting stunt in Brüno where he makes out with his assistant Lutz, 40 local police officers were needed to help them escape the rioting mob that was brewing in reaction to them.

While filming Borat in New York City, the local police chief became fed up with Cohen’s antics and attempted to set a trap for the actor and arrest him. However, Cohen and his team aren’t that easy to trick, and instead immediately left the state (again!) to avoid an arrest.

Borat did not actually film any scenes in Kazakhstan. Instead, the crew filmed their footage in Glod, Romania, and convinced the local people that they were shooting a documentary on the issues of poverty. Yeah…let’s just say the locals weren’t so happy about the final product they saw, and promptly sued the production.

Brüno almost didn’t see a wide release. The film was originally rated NC-17, and Cohen had to re-edit the entire movie in order to obtain an R rating and ensure the proper release of his film.

Cohen based his appearance in The Brothers Grimsby on the look of former Oasis frontman Liam Gallagher.

The now infamous elephant scene of The Brothers Grimsby is too raunchy for television, so when the film was being promoted, footage of audience reactions was shown instead of the actual clip from the film.

Despite being named after the British town of Grimsby, the film was actually shot in Essex. It’s probably fair to say at this point that Cohen’s reputation precedes him.

In order to hide their intentions and mislead people about what was happening, a fake production company called “One America Production” was established to convince people that Borat was real.

The rodeo scene in Borat turned violent, and the crew feared for their lives after the crowd grew angry at Borat’s actions in the scene. The rodeo producer had originally requested a demo CD of Borat singing the anthem, but hadn’t listened to it—and of course, the CD was blank anyway.

Cohen would stay in character as Borat for the entire day, from the moment he left his hotel to after production wrapped. There was even the time he stayed in character during an interrogation by the secret service. That’s some next level commitment.

4. Sacha on the Roof

For his role in Sweeney Todd alongside Johnny Depp, Cohen took to impressing director Tim Burton by singing the entire score of Fiddler on the Roof for his audition. It’s hard to say if he really wanted to the role, or if he’s just a man who commits himself to everything he does.

The role of Julien in Madagascar was originally a small part, but the producers found Cohen’s audition so funny that they rewrote the part so that he would have a larger role in the movie. He also improvised the “It’s got a gecko on it” line, and the surrounding dialogue, which the crew, again, found so funny that they adapted the film to Cohen’s comedic genius.

Cohen signed on to be in the film Hugo in order to work with legendary director Martin Scorsese. He then based his role off of his comedy idol Peter Sellers’ work as Inspector Clouseau in the Pink Panther films.

Of all the outrageous scenes that Cohen filmed for Brüno, one was just too disturbing for the movie. In it, Cohen spoke to a deranged man who eventually went on to commit a mass murder in Kansas. The man was Frazier Glenn Miller, an American neo-Nazi, and the footage with him was ultimately cut because of its extreme nature: Miller physically lashed out at the actors during a scene. Miller went on to be the shooter behind the mass shooting at the Overland Park Jewish Community Center in Kansas, and is currently on Death Row for the murder of three people. 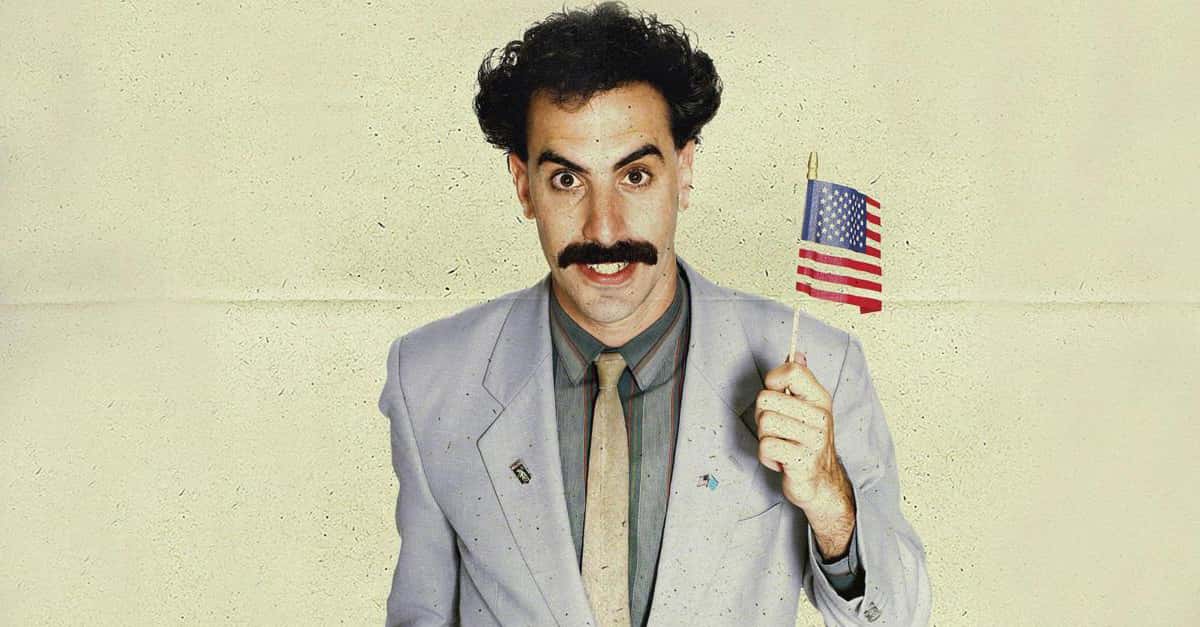