Is My Cat A Psychopath? Science May Have The Answer

Is My Cat A Psychopath? Science May Have The Answer

Sure, some cats are bubbly, cuddly, sweet, and even seem to display empathy. But then, there’s the others. The ones who have no interest in humans beyond the human ability to feed them. The cats who ceaselessly present you with their lifeless prey. And, of course, the cats who make eye contact with you while knocking a glass off a table. All this behavior has led pet owners to ask—is my cat just a jerk? Or is my cat a psychopath?

What Exactly Is A Psychopath?

To figure this out, we need to look at the word “psychopath” and what it actually means—not just how it’s used in movies and TV shows. Some classic symptoms of psychopathy in humans are “boldness, lack of empathy, inclination to violence and manipulation, impulsivity, [and] narcissism.” Many of us encounter people who have these traits every day—but it’s when they present all together that it becomes a problem.

Movies and TV shows have portrayed the psychopath as robotic and utterly inhuman—but that’s not always the case. In fact, many psychopaths can suffer pain and distress. They can also love those close to them in their own way. The causes of psychopathy are both genetic and environmental, and mitigating factors like parental neglect can make it worse. Ultimately, less than 1% of the population are psychopaths.

But even then, no psychiatric or psychological organization has officially approved a diagnosis of psychopathy. Regardless, mental health professionals may use a number of tools to make an unsanctioned diagnosis in humans. These include Robert D. Hare’s Psychopathy Checklist, the Psychopathic Personality Inventory, and one self-report assessment called the Triarchic Psychopathy Measure.

It was this diagnostic method that scientists chose when they decided to build an assessment tool not for humans—but for cats.

How Can You Test A Cat For Psychopathy?

When you test a human for psychopathy using the triarchic method, it’s looking for how much the subject fulfills three traits: boldness, meanness, and disinhibition. This was the model that researchers at the University of Liverpool and Liverpool John Moores University settled on when they undertook their study to see if a human psychopathy test could be adapted for felines.

When the researchers began their endeavor, the trait of boldness became something more like fearlessness, while disinhibition became disobedience. On top of the three classic triarchic traits, they came up with two more: pet-unfriendliness and human-unfriendliness. Taken all together, they called this set of traits the CAT-Tri+ measure.

Once they’d settled on their parameters, they came up with a 46-part questionnaire that they distributed to cat owners whom they’d recruited on social media. What were the questions like? Well, each respondent rated their answer on a scale of 1-5, from “does not describe my cat” to “describes my cat extremely well.” There was also a “Not applicable” answer.

The questions themselves range from “My cat dominates me” to “My cat purrs when attacking people/animals.” Ultimately, answers are tallied up. The higher the score, the more likely your cat is to be a little tiny kitty psychopath. But, as anyone who’s lived with a cat knows, not all of these qualities make living with the cat unbearable.

What Do I Do If My Cat Is A Psychopath?

While it can be helpful to break down certain behaviors in pets to their core in order to address them, the short answer is: nothing! When people encounter problems with their pet’s behavior, it may have more to do with the human than the pet. Despite centuries of domestication, pets still are animals, and many people have unrealistic expectations of them.

A lot of the traits that we view in our pets as positive (good behavior, affection, eye contact) have been the products of adaptation over many generations. Humans want to see what they like mirrored in their pets—even if it’s unnatural. There’s an added layer of this when it comes to expressions, as cats don’t have the same facial muscles that humans or even dogs do.

In fact, humans love dogs and puppies because of the variety of expressions that they can make. Cats don’t communicate their feelings through facial expressions. Instead, you can read a cat’s mood through its tail, purr, stance, and/or ear position. When a cat stares with a blank expression, it may seem unsettling—but really, that’s the only choice they’ve got!

So what was the ultimate goal of this study if not just a fun, Buzzfeed-style personality test for your pet? Well, Becky Evans, one of the primary researchers behind the study, has hopes of one day developing an even more thorough study so that shelters may use the test to better match cats with potential adopters. And if we can prevent more returns to shelters and other adoption slip-ups—well, that’s an incredibly noble cause to get behind. 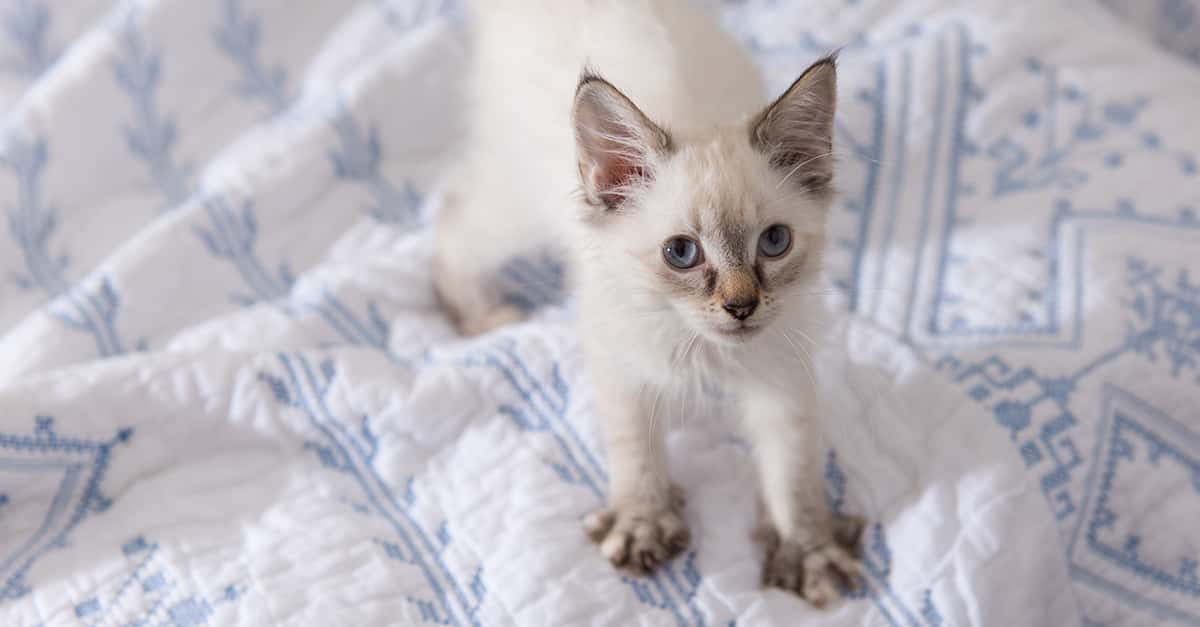 Why Do Cats Knead?