“We are all leaders, whether we want to be or not. There is always someone we are influencing, either leading them to good, or away from good.” – Leif Erikson

Ah, good old Leif Erikson. Or is it Ericson? Well, like a good deal of what he did in his life, it is up for debate. However, what is not up for debate is that the man found his way to the North American continent five centuries before Christopher Columbus, which makes him the first known European explorer to set up camp on North American soil. By now, many of us may know that, however, there is plenty that people do not know about the great explorer. Good thing for Factinate! Here are some of the most interesting and adventurous facts about Leif Erikson.

1. Putting The Erik In Erikson

Leif Erikson’s father was Erik the Red. Does the name ring a bell? Well, that is because Erik was famous in his own right as he was the man who left Norway and settled the first European colony on Greenland.

Why did Erik the Red travel all the way out to Greenland from his native Norse nation? Because he had been banished! Not once, but twice! First, he was expelled from Norway for ten years for the crime of manslaughter. Then, after settling in Iceland for some time, he was again exiled, this time for the murder of a series of men in the fallout of a landslide that his slaves had started.

Most of what is known of the life of Leif and his family comes from the Icelandic Sagas of the 13th and 14th centuries. These sagas detail the adventures of the early Vikings, and the two sagas in which we learn about Leif and his father are The Saga of Erik the Red and The Saga of the Greenlanders.

It is not known exactly where Leif Erikson was born, but it is believed by many to have been in Iceland during his father’s initial exile. Though, he would travel with his father and be raised in Eastern Greenland.

5. Divided On The Intentions

While Leif Erikson is credited as the first European to reach the North American continent, his intentions were debated. Some historians believe that Leif reached North America purely by accident, while another camp believes that he set out for the continent after hearing stories about it from older explorers.

Leif set up camp in what is now considered Newfoundland, Canada, around the year 1000 CE. This is now referred to as Vinland. Though there is evidence that he spent time in the Americas, he would eventually return to Greenland to live out the rest of his life.

After returning to his homeland of Greenland, Leif was given a mission by King Olaf I Tryggvason of Norway. This mission became his life’s work from there on out, as he was now a man tasked with the responsibility to spread his religion of Christianity. He was chosen by Olaf, a preaching Christian after he became a personal bodyguard to the King, and Olaf believed him to be an eager disciple to convert.

Though he was a Christian, Leif’s parents were followers of Norse paganism, and upon being baptized and given the Christian mission, he became an evangelist in Greenland.

9. Getting Mom In On The Mission

The mother of Leif, Thjodhild, eventually converted to the new religion and was responsible for commissioning the first Christian church in Greenland.

Though his mother was fond of Christianity, his father, Erik, was not. Cold to the new religion, he became hostile to Leif’s mission. Because of his hostility towards the mission of his son and of his wife’s religion, Thjodhild withheld her body from Erik and would not have sex with him.

Although he invited him, Leif traveled to mysterious new continent without his father. This is because while Erik was on his way to the ship to set sail, he fell off of his horse and took it as an omen not to travel with his son. He died during that next Winter while Leif was away, a fact Leif would not be aware of during his travels in North America.

Leif was unable to travel with his father, but his older brother Thorvald Erikson did come along for the journey. Thorvald would end up being the first one to come into contact with the native population, whom they dubbed the skrælings. Upon contact with the natives, Thorvald engaged in the Battle of Vinland in 1003, in which the Vikings killed 41 natives and took 22 casualties. Thorvald himself would not make it out alive, as he was fatally wounded during the battle.

Leif also had a sister named Freydís Eiríksdóttir. Freydís also came along on the voyage and was at the site of the Battle of Vinland. During the battle, the natives surprise attacked the Viking ships, which Freydís witnessed while eight months pregnant. Because the Norse explorers had never seen such foreign weapons as used by the natives, many of the men fled the scene, which led Freydís to scold the men and take up battle herself. As the Vinland sagas state:

““Why run you away from such worthless creatures, stout men that ye are, when, as seems to me likely you might slaughter them like so many cattle? Give me a weapon! I know I could fight better than any of you.” Ignored, Freydis then picks up the sword of the fallen Snorri Thorbrandsson and engages the attacking natives. She undoes her garment exposing one breast and beating the sword’s hilt on her chest gave a furious battle cry. With this, the natives retreated to their boats and fled. Karlsefni and the other survivors rebuffs her behavior rather than offering any praise.”

Leif’s last sibling, Thorstein, did not sail with him. Instead, after learning about the death of their brother Thorvald, Thorstein gathered a company to sail to Vinland to retrieve the body to be buried in Greenland. However, the weather was so harsh, they quickly turned their ship back towards Greenland, and would die there that very winter.

Though he created the colony of Vinland, Leif Erikson would never colonize the region. Neither did any other of the Norse explorers who came with him, or after.

No one knows exactly where Vinland was located. However, in L’Anse-Aux-Meadows of Northern Newfoundland, relics of a settlement were found in 1963. The site held over 2,000 Viking artifacts and is verified as the oldest European settlement found to date.

The reason why Leif named his settlement Vinland was that upon reaching the region, he noted that the land had wild grape vines growing everywhere.

18. Observing Leif in the New World

In the United States, October 9th is observed as Leif Erikson Day. This date has no significance to the life of Leif, rather it was chosen because it was the day in 1825 that the first official immigration ship from Norway docked in New York Harbor. The day was adopted by Congress in 1964. Oh, and the holiday is also the second favorite holiday of Sponge Bob, right behind April Fool’s Day.

During his childhood, Leif was partially raised by a man whom he referred to as his “foster father.” This man, named Tyrker, was a thrall (slave) of Erik and entrusted with the responsibility of looking after his children.

Leif married a noblewoman by the name of Thorgunna. The two had a pair of sons by the names of Thorgilsand and Thorkell. Leif and Thorgunna met while Leif was summering in the Hebrides, the archipelago of Scotland, after being blown off course on travel from Greenland to Norway.

Leif was also related to the man who was credited with discovering Iceland. Naddodd was a Faroese explorer who was sailing from Norway to the Faroe Island when he was blown off course by a storm and landed in Iceland.

The man whom Leif was inspired to explore North America by was Bjarni Herjólfsson, an Icelandic merchant was caught sight of the North American coast after being blown off course during a journey. After finally making it back to Greenland, he preached to the locals about what he had seen but not explored.

23. Nice Ship You’ve Got There

In order to make a voyage to find this newly spotted land, Leif actually bought Bjarni’s ship off of him. Not a bad idea, considering the ship weathered the storm that Bjarni had endured.

Before hitting Vinland, Leif’s voyage made two stops. These stops on the way to Newfoundland were likely Baffin Island and Labrador, which he called “Helluland” and “Markland,” respectively. Because we never get where we’re going in life without initially.

Leif was also known as Leif the Lucky. This nickname came during his return voyage to Greenland after he took on a crew from a shipwrecked vessel and was given their entire ship’s cargo, in exchange for his efforts. What a guy!

There are some seriously imposing statues of Leif throughout the world. The fiercest of these are in Iceland, famously in front of the largest structure in Iceland, the church Hallgrímskirkja. But, he is also honored outside of his homeland, with statues in Boston, Seattle, and even in the capital of Minnesota, Saint Paul, where his imposing statue will make you not want to mess with Minnesota. 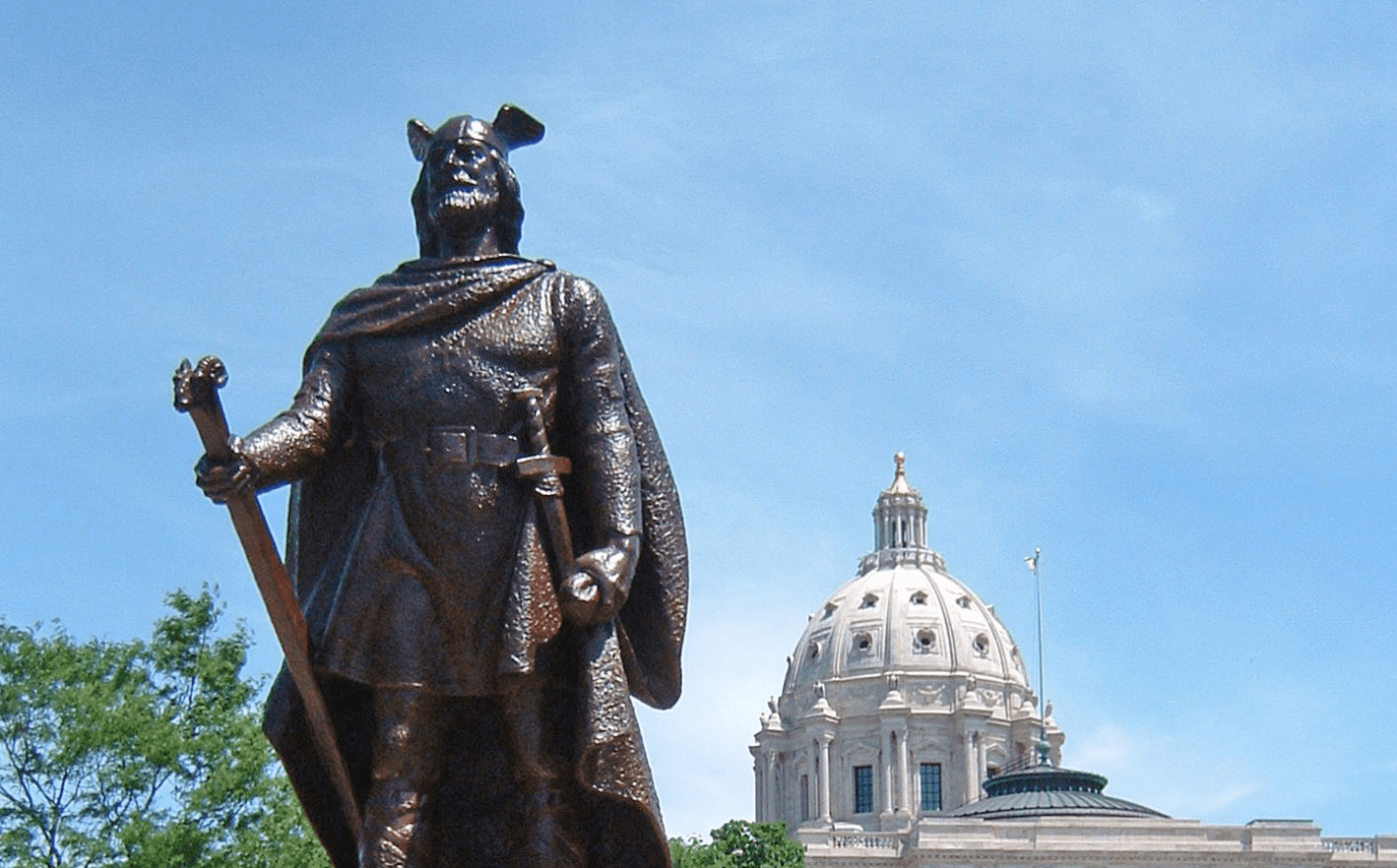 27. Mixed Up Spelling And Pronunciation.

In much of North America, Leif is pronounced as “Leef.” However, in both Iceland and Scandinavia, his name is pronounced as “Layf” which sounds more like the English word “safe.” The way his name is spelled also varies on the region, and on the time period. Early versions of his name are written as “Leifr Eiríksson” and “Leiv Eiriksson.”