“I didn’t want to accept that people would forget me, that the government wouldn’t do anything to negotiate our freedom. After a year, I came to understand that not only had one year passed, many more would come.”—Ingrid Betancourt

Death eventually calls on everyone, but most of us fear and fight it until our dying breaths. Perhaps this is why we find hostage movies so gripping—we understand the fear of potential impending death and live vicariously through the captives who manage to narrowly escape it. And, of course, Hollywood is bound to toss in a little Stockholm syndrome romance for good measure. Because if there’s one thing that resonates more with humans than death, it’s love.

But what are actual, real life hostage situations like? The truth is a lot more tedious, painful, and dehumanizing for those involved than Hollywood makes it out to be. Hostages can be kept for years at a time without being able to speak to others or see where they are, and most go unreported. Here is a list of 24 true facts about the heroism of hostage negotiators, the traumatic experiences of captives, and the gripping details of rescue missions.

“If we remain hostage to our past, then we will go nowhere.”—Shehbaz Sharif

24. White House to the Rescue

Since its founding in 2015, the White House’s Hostage Recovery Fusion Cell has assisted in the release of about 100 hostages by coordinating hostage recovery operations. About 25 of those hostages had been held by terrorist groups.

Wherever there is tragedy, there is also someone profiting off it. In the case of hostage situations, the ones profiting are the hostage insurance brokers. They make their money by offering consulting and kidnap and ransom insurance to big companies who are worried their employees might be at risk. Kidnap and ransom insurance can cost a large, international company tens of thousands of dollars–sometimes even more money than just paying a ransom outright.

During the Iran hostage crisis of 1979, 52 hostages were kept in the American embassy in Tehran for over a year by  group of Iranian students. They were humiliated by their captors. They were forced to remain silent, to wear dirty clothes, and to listen to ridicule while they were blindfolded. Worst of all, the hostages did not know how long they would be held or what their captors would to do them while they were there.

President Jimmy Carter clearly had some troubles during the Iran hostage crisis. First of all, 52 Americans were held by a student group in Tehran for 444 days under his leadership. Secondly, his attempt at a great American rescue mission (“Operation Eagle Claw”) failed miserably, killing eight servicemen. To top it all off, on January 21, 1981, Ronald Reagan overtook Carter’s presidency and just a few hours later… the hostages were released! Some even speculate that Carter would have had a second term as president if it weren’t for those meddling kids.

Approximately 80% of the FBI’s Hostage Rescue Team (HRT) already have special police or military training before joining the FBI. However, all candidates for these highly competitive positions must undergo extremely physical, tactical, and technical tests and training—all while continuing to complete their usual, ongoing FBI duties.

The HRT is responsible for rescuing hostages and other individuals in high-risk situations. They have now been called to assist in more than 850 crisis situations, from terrorist attacks to surveillance operations.

18. Covering All the Bases

The FBI has 56 field offices and there is a SWAT team in each one. They are all highly capable of responding to hostage rescue situations and all your other high-risk situation needs.

Most of the time, criminals don’t intend on taking hostages, it just kind of happens in the heat of the moment. The presence of a hostage might mean that the situation has gotten out of the criminal’s control and they don’t know what else to do.

16. Criminals Are People, Too

It’s not what you say. It’s how you say it. Like anyone else, a hostage taker probably just wants to be treated like a fellow human being. Ex-negotiator Gary Noesner was once told by a perp, “I don’t remember what you said, but I liked how you said it.”

In a lengthy hostage situation, police will attempt to gain control over the location where hostages are kept. This includes manipulating access to the building, communication to the building, and even the public utilities inside the building to get the outcome they want.

Obama’s administration instituted a policy of not paying ransoms or giving anything else up to release hostages. Indeed, paying ransoms only provides incentive to take hostages and funds future hostage-taking actions.

American hostages are twice as likely to die in captivity or stay captive than hostages taken from other countries.

Al Qaeda took over $125 million in ransom payments for kidnapped hostages between 2008 and 2014. About 15% of hostages taken by Al Qaeda in that time died by some means while they were held captive.

11. When Life Gives You Lemons…

The story of Father Lawrence Martin Jenco’s captivity is a brutal one. His captors held him for 564 days, and during that time he was kept mostly bound and blindfolded. He was only allowed to relieve himself once a day and he suffered numerous health problems due to his treatment. Yet, despite all of the torture, Jenco remained faithful to his God and forgave his captors. He held Catholic mass for himself and other hostages whenever possible. He even kept his sense of humor in tact, calling his worship group the “Church of the Locked Door.”

The same group that took Father Jenco also held captive Terry Anderson. The armed group was supported by Iran to protest US military presence in Lebanon during the Lebanese Civil War. Anderson was the longest held of their captives at nearly seven years of captivity. After those years, he wrote a best-selling book about his experiences called Den of Lions. 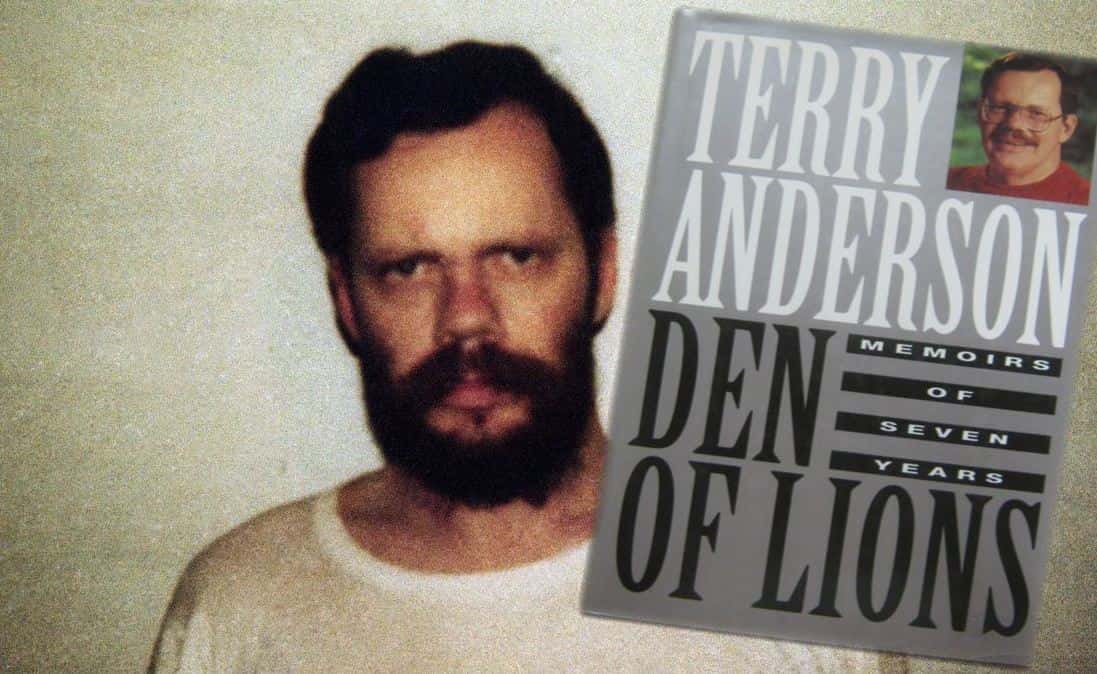 Dozens of unsuspecting Americans can be taken hostage overseas each year, but 60 to 70 percent of those cases go unreported.

In October 2002, over 700 theater-goers sat down for the second act of the popular musical Nord-Ost at the Dubrovka Theater in Moscow. Suddenly, about 50 militant Chechan warriors stormed the theater with 100 kg (220lbs) of explosives, three giant bombs, 100 hand grenades, 20 pistols and 18 assault rifles in tow. They took the entire audience and cast of the show hostage for about 57 hours before the Russian military intervened. Many citizens wondered and speculated about how that many armed individuals managed to burst through the doors of a public building… Police bribery, anyone? Unfortunately, the public was left hanging as the authorities were never investigated on the issue.

How did Russian special forces manage to diffuse the Moscow theater hostage situation, you might wonder? Well, you’re not the only one. The story goes that the Russian forces wanted to surprise the attackers. So, instead of sending in people, they seeped sleeping gas into the building, which knocked out everyone inside. To ensure secrecy, medical professionals were not contacted until AFTER the mission so the hostages were carried out by the police, not paramedics. For one reason or another, the incident was fatal for about 130 of the hostages. President Vladimir Putin swears the gas alone could not have caused death, but the exact contents of the gas used remains a mystery. When asked, 74% of Russians didn’t believe the “official” version of the truth on these events.

The Russian government must not have learned any lessons after the Moscow theater hostage crisis, because another 330 hostages were killed by Chechnan militants in 2004 at a Beslan school. 32 armed individuals entered a school with a population of over 1,000. Hostages, many of them young children, were forced into a gymnasium rigged with explosives. They were refused food and water, forcing some to start drinking urine. When they heard explosions go off inside the school, the Russian forces had had enough. They entered the building and killed all but one of the attackers, who went to prison for life.

5. The More the Messier

According to the United States government, 9,400 people were kidnapped or taken hostage in terrorist attacks in 2014—a number three times higher than the year before. Most occurred in Iraq, Nigeria, and Syria.

Stockholm syndrome first starts to develop in a hostage when they are threatened with death, but then the captor decides against taking their life. The captive becomes more grateful for their life than they are angry at the prospect of their death.

Stockholm syndrome occurs when a hostage starts to become attached to their captor and their plans. The syndrome got its name after a 1973 bank robbery in Stockholm, Sweden in which the hostages started to irrationally trust one the criminals keeping them locked inside the bank’s vault. One victim became more afraid that the police would enter the building than she was of the person keeping her captive, and when the victims were released, they refused to testify against the criminals in court, and even began raising money for their defense bills.

2. The Case of the Accidental Bank Robber

Probably the most obvious and famous example of Stockholm syndrome is Patricia Hearst. Hearst’s grandpa William Randolph Hearst made a fortune off the newspaper and movie businesses, but Hearst was only one of many heirs to the money, so he didn’t bother providing her with protection. Big mistake, grandpa. In 1974, Hearst was kidnapped by an American group who sexually assaulted her and threatened to kill her if she didn’t assist in their crimes. At the time, Hearst was convinced she participated willingly and was sent to jail for bank robbery. However, she was later issued a pardon by President Bill Clinton.

Counterintuitively, in most hostage situations the passage of time is a good sign. The longer a negotiator spends with a hostage taker, the longer the hostage stays alive and well. Time gives law enforcement a chance to assess the situation and calm the hostage taker down.

Morgan EUA is a writer at Factinate.