“Architecture should speak of its time and place, but yearn for timelessness.” —Frank Gehry

Architecture is one of the true engineering feats of humanity, and each civilization has their own marvels. From organic materials to carving stone, some incredible structures have been built out of human ingenuity.

The main attraction built by China for the 2008 Olympics, the Beijing National Stadium was made to be the “most important public space in Beijing.” Mimicking Chinese pottery, this 91,000 capacity stadium contains a 24-hour rainwater collection reserve meant to improve sustainability. Jackie Chan was the first artist to hold a pop concert in the stadium in 2009. 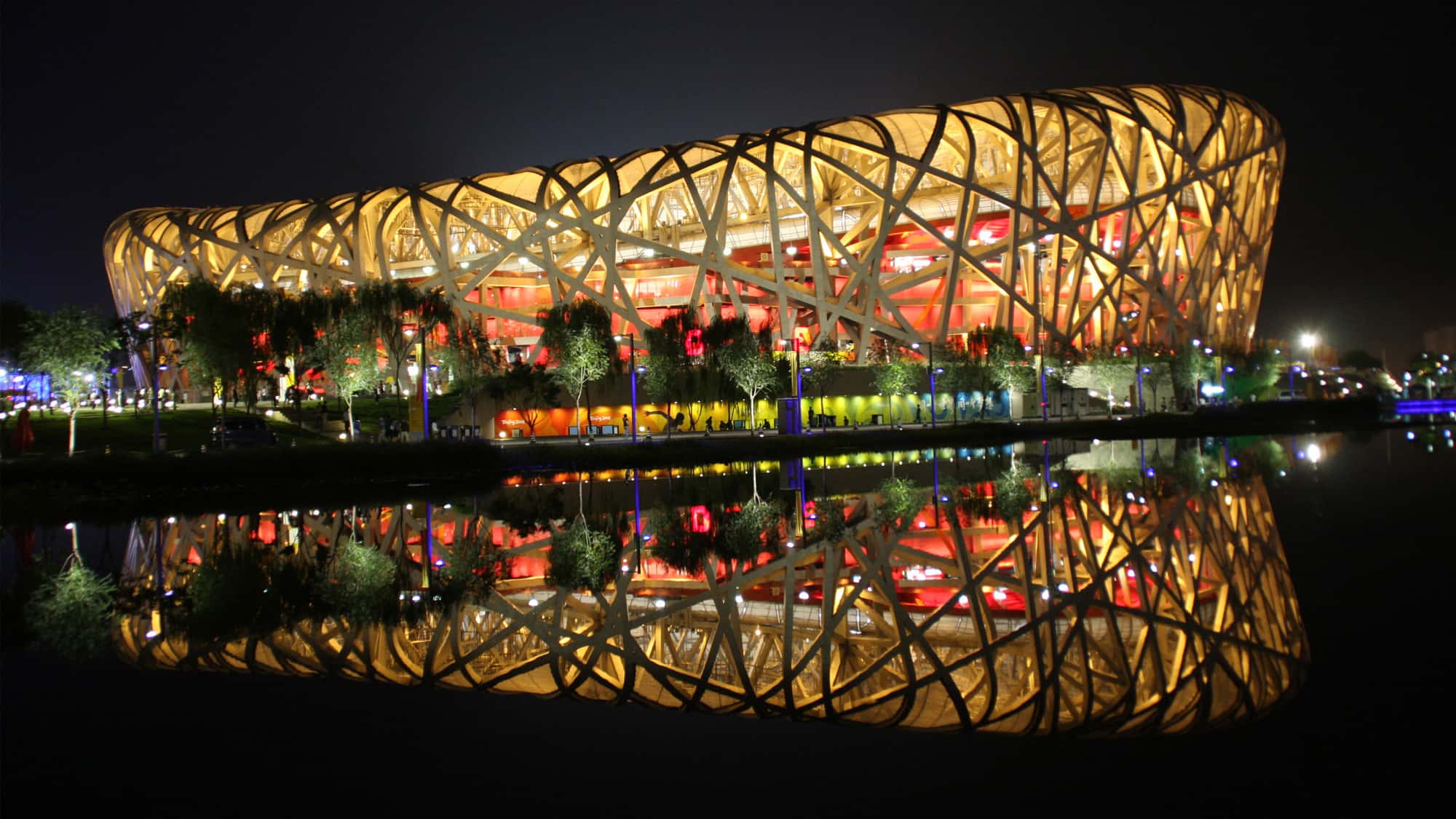 The Great Pyramid of Giza is the largest pyramid in the world and an awe-inspiring yet confounding piece of architecture that we are still trying to grasp. Used as a burial chamber, an estimated 2.3 million stone blocks were used to construct this massive pyramid, and the builders are believed to have cut the stone blocks by hammering them with wooden wedges. It is also believed that due to the Egyptian knowledge of the alignment of stars, astrology played a great role in its construction. 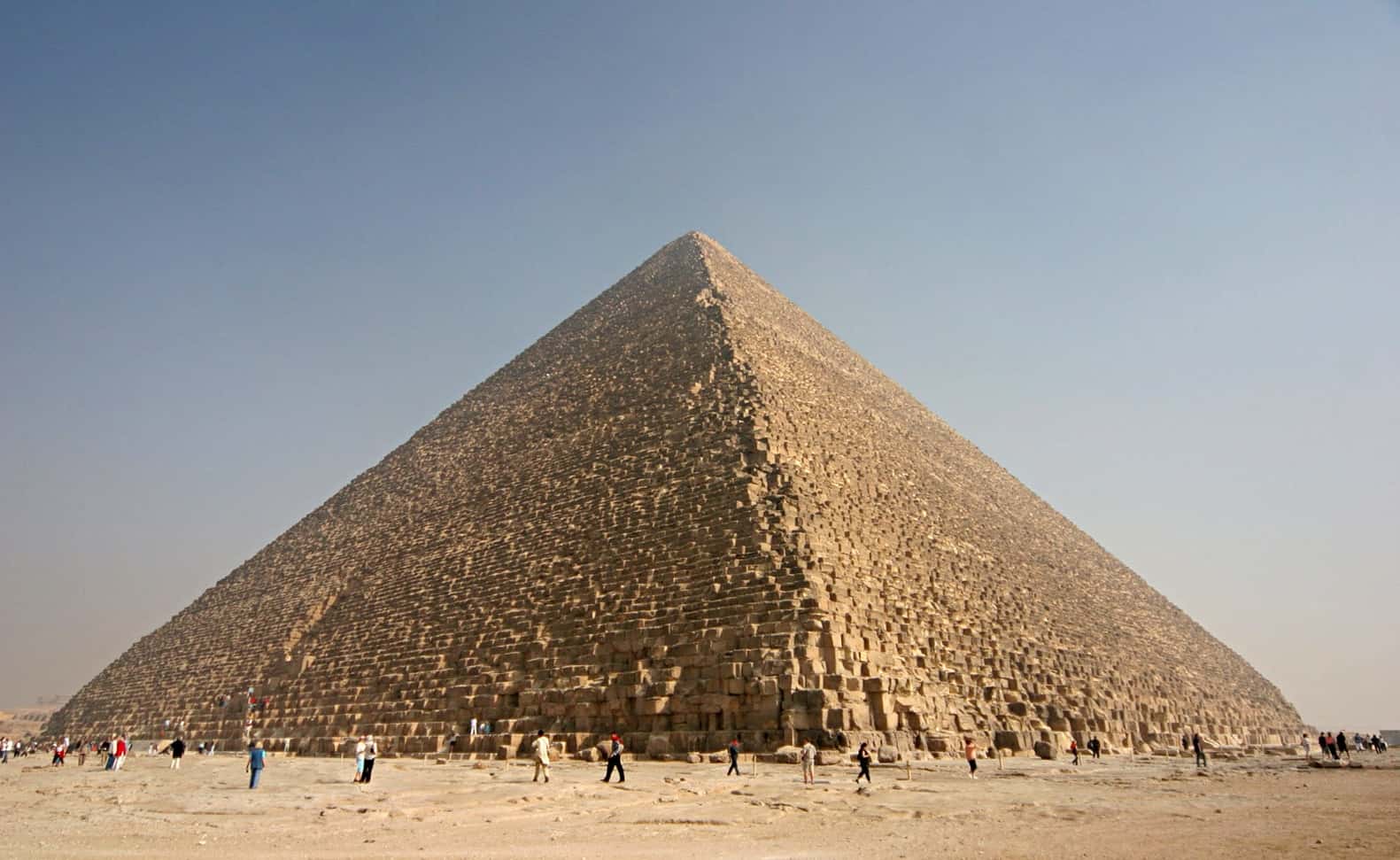 In the ancient Mayan city of Chichen Itza is the Temple of Kukulcan, a Mesoamerican step-pyramid that overlooks the center of the city. Most famous for its staircases, which form triangular shadows during the spring and autumn equinoxes and create an illusion of a large serpent crawling down the pyramid, Kukulcan is aligned with the astronomical solar zeniths and was also used for sacrifices. 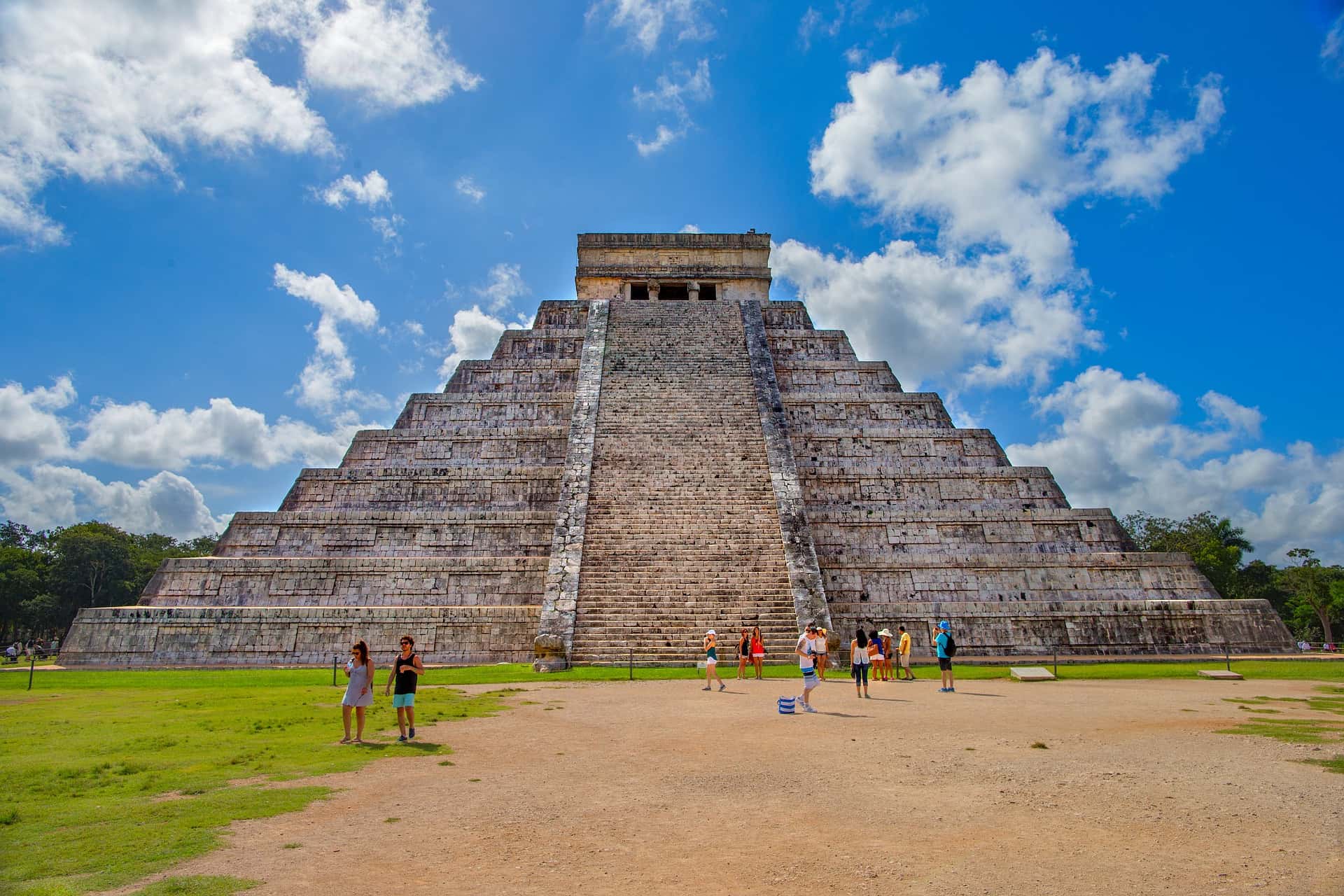 Petra, South Jordan is an ancient capital city that is carved out of rock. Known as the “Rose city” since it consists of red-rose sandstone, there are temples, houses, tombs, and altars built all along sandstone cliffs dating back 2000 years. Don’t have the money to travel there? 27 sites in Petra can now be seen on Google Street View. 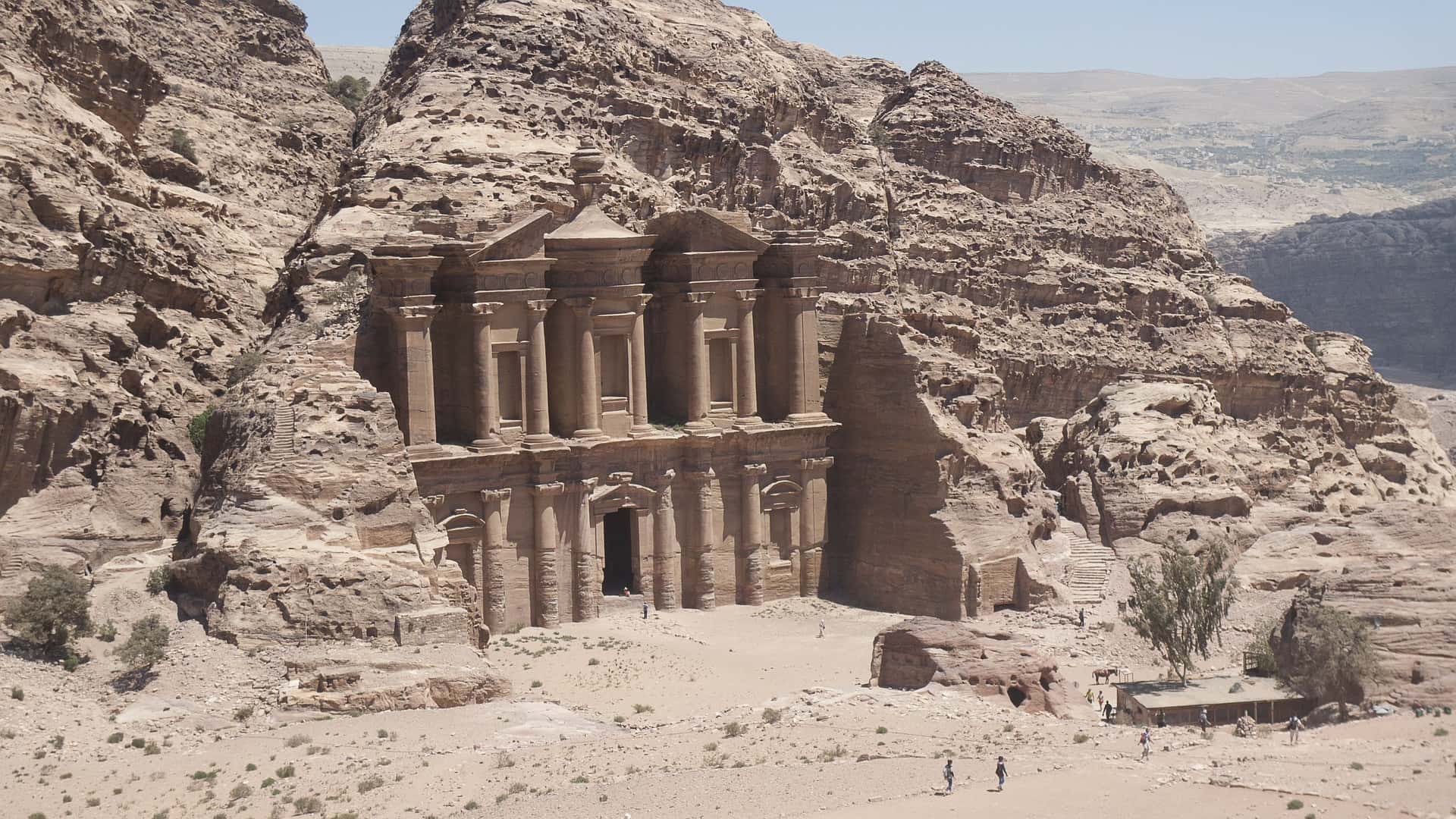 Angkor Wat is a dazzling temple city that induces wonder over the the ancient Khmer kingdom of modern Cambodia. Built in the 12th century, it is still the largest religious monument in the world. Encapsulated by a massive moat, it is a temple mountain. Experts are still not exactly sure what techniques were used to harvest and build its massive stone structures. Angkor Wat means “Temple City” or “City of Temples.” 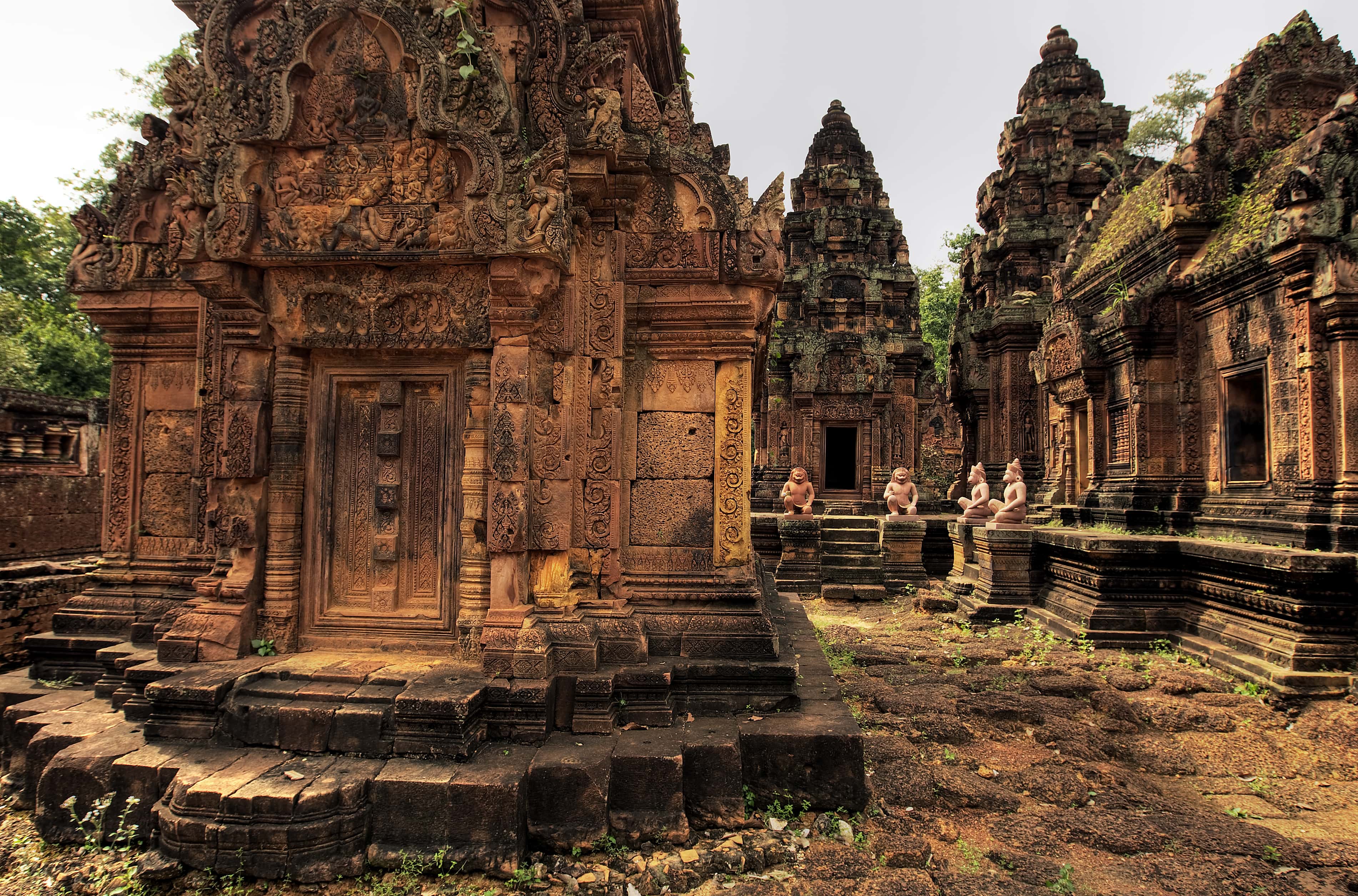 The tallest bridge in the world is also considered one of the greatest feats of engineering. Built to ease traffic issues, the Millau Viaduct of southern France spans 2,460 meters across the gorge valley of the River Tarn and offers incredible views of the region. Sorry, Paris, the Millau Viaduct is taller than the Eiffel Tower; one mast is 343 meters or 1,125.5 feet tall. 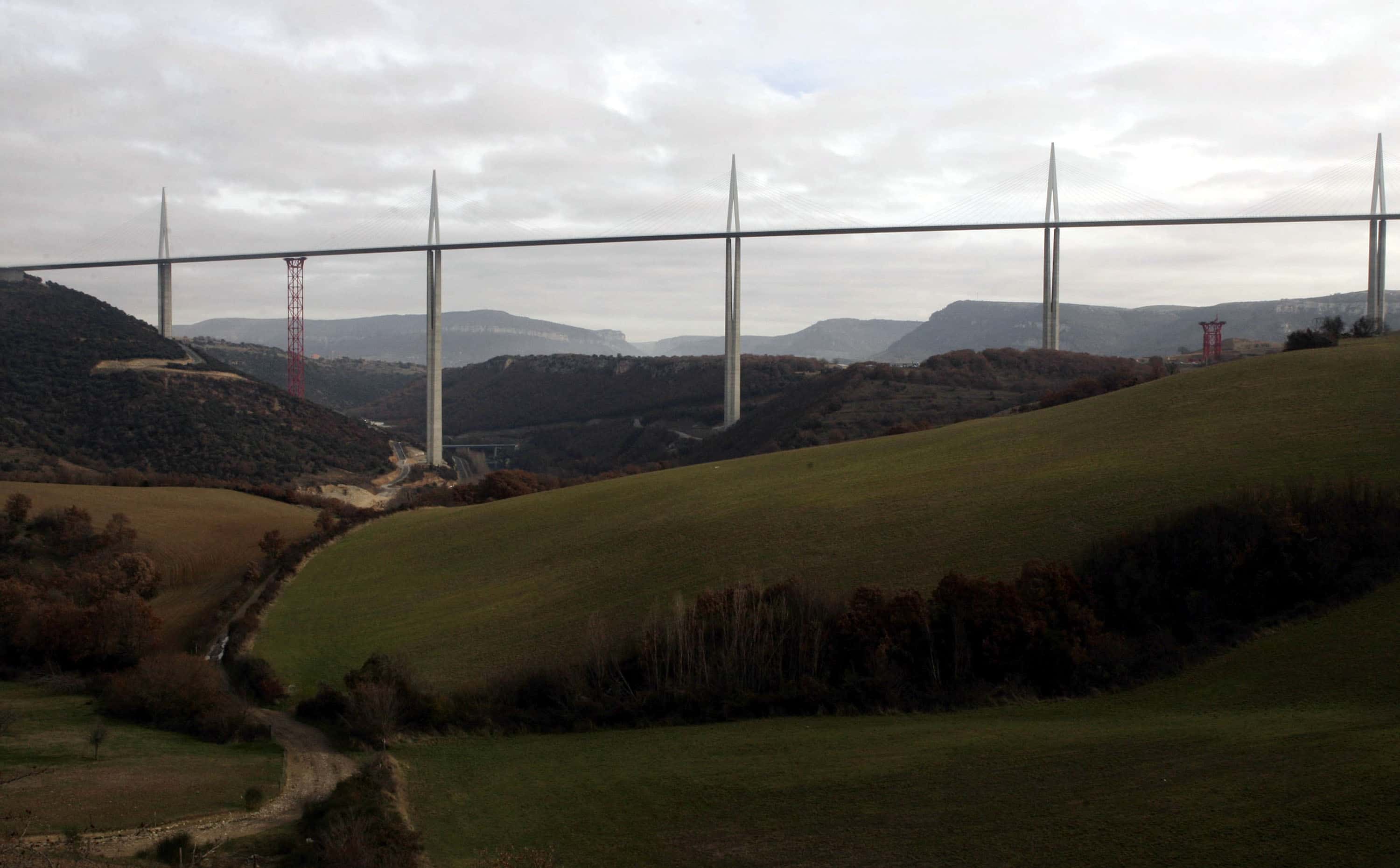 What is considered legendary architect Louis Kahn’s defining work, the Salk Institute is a non-profit scientific research facility framing the Pacific Ocean. Built to draw the best minds the world has to offer, the laboratory cluster is two symmetrical parallel building blocks that contain a stream of water flowing through its center, accentuating a grasp towards the ocean. Salk has had at total of 11 Nobel Laureates, including DNA scientist Francis Crick. 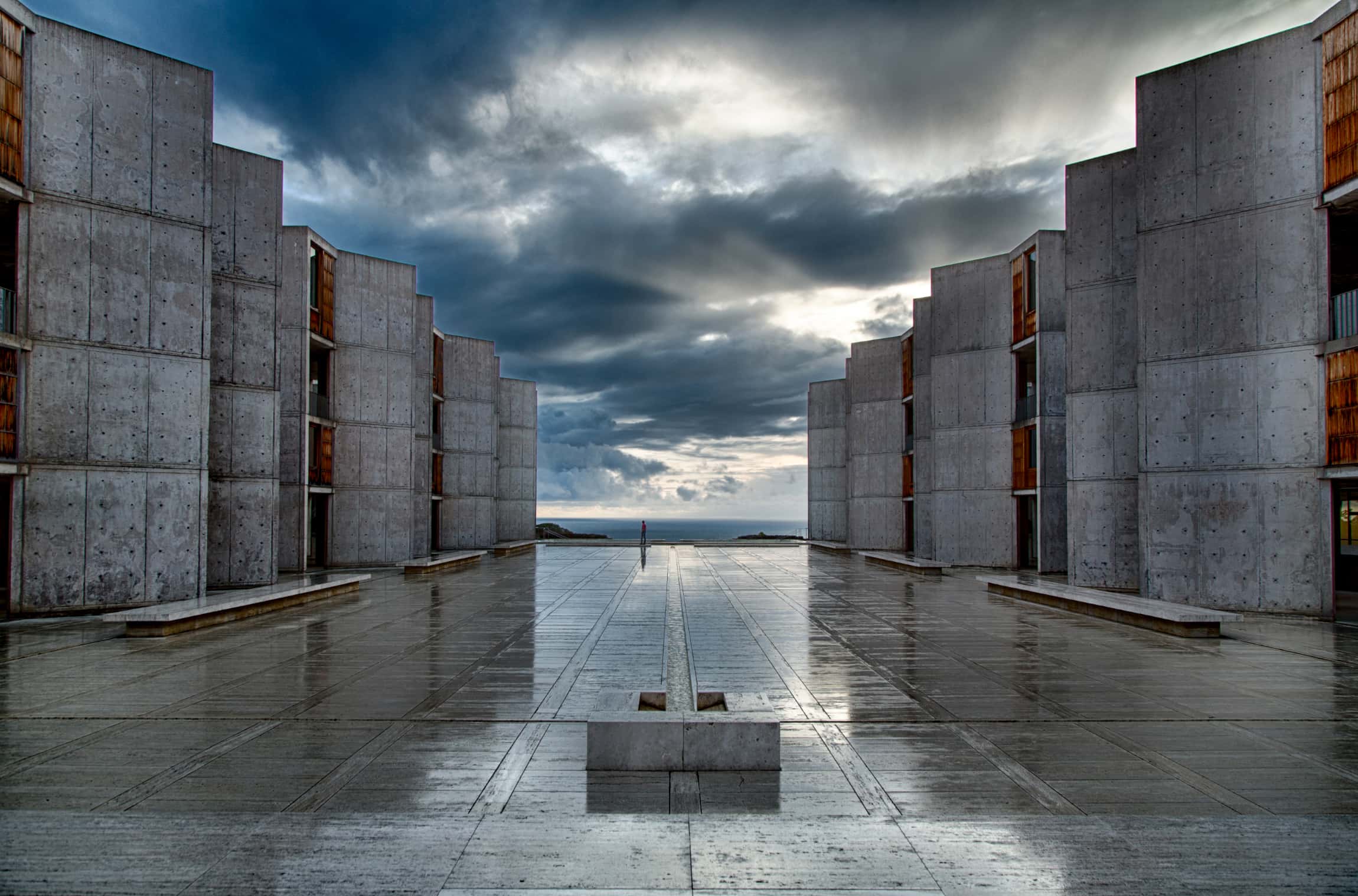 Sagrada Familia is one of the most famous churches in the world. A mashing of different architectural and engineering styles, the church is crafted with meticulous attention to organic detail. It is one of the most unique and uncompromising pieces of art we have in the world, as it was Antoni Gaudi’s mission to fuse the organic world with the spiritual world. Don’t always expect to get a good view of it if you visit Barcelona, however: it has been under construction for 131 years. 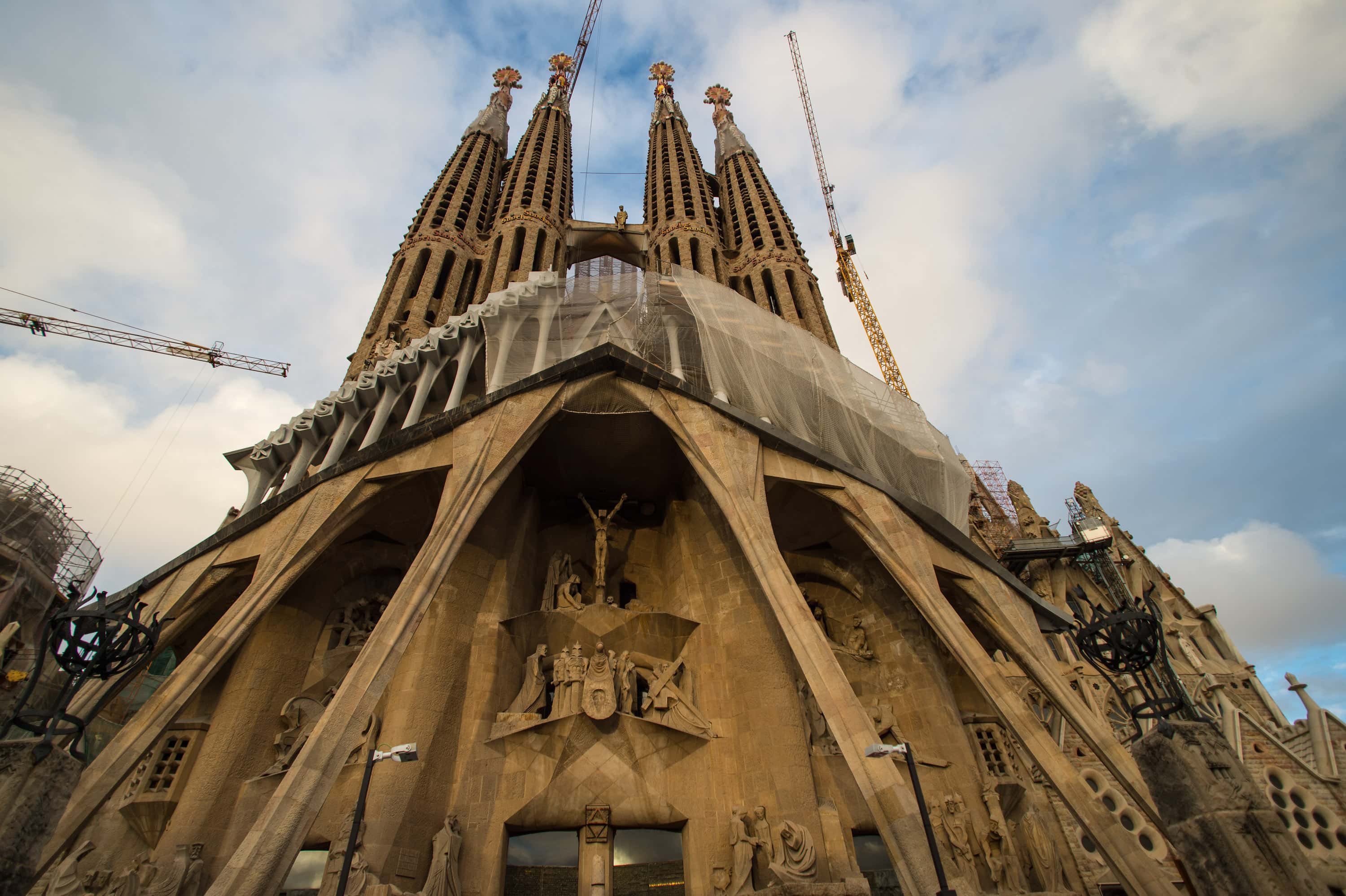 15. Who Built My Honeycombs?

Another of Antoni Gaudi’s astonishing architectural marvels, Casa Milà is a UNESCO world heritage site that uses ruled geometry to achieve an organic flow of space and constant curvature. Inspired by natural materials, the building was controversial, and the local government ordered demolition of some aspects and fined Gaudi heavily for his egregious infractions of building codes. The building has been featured in films ranging from Michelangelo Antonioni’s The Passenger to Woody Allen’s Vicky Cristina Barcelona. 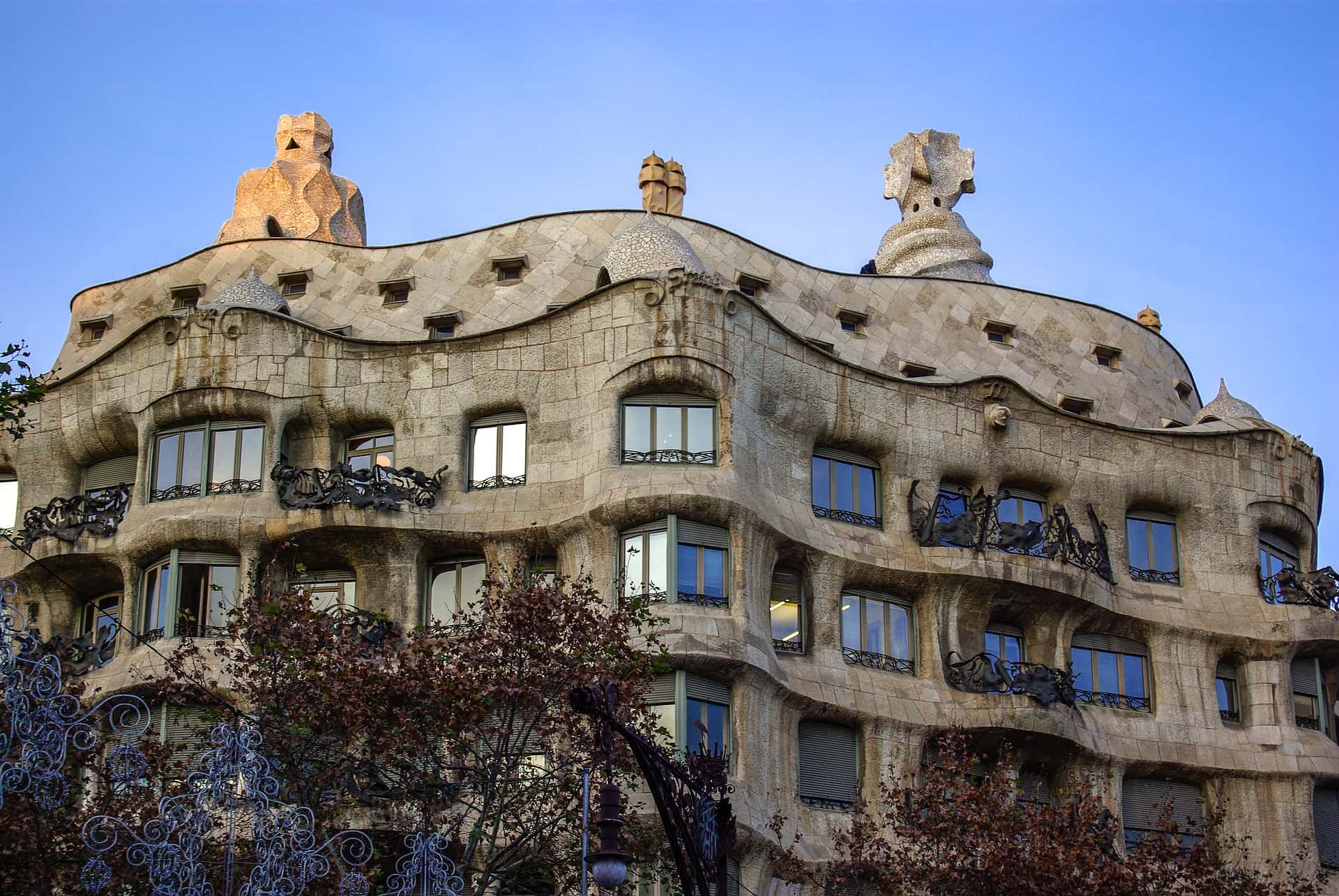 An amazing titanium ellipsoid dome, the National Center for Performing Arts in Beijing, China is publicly known as “the giant egg.” Built next to it is a large artificial lake, which produces the aesthetic effect of an egg floating on water. 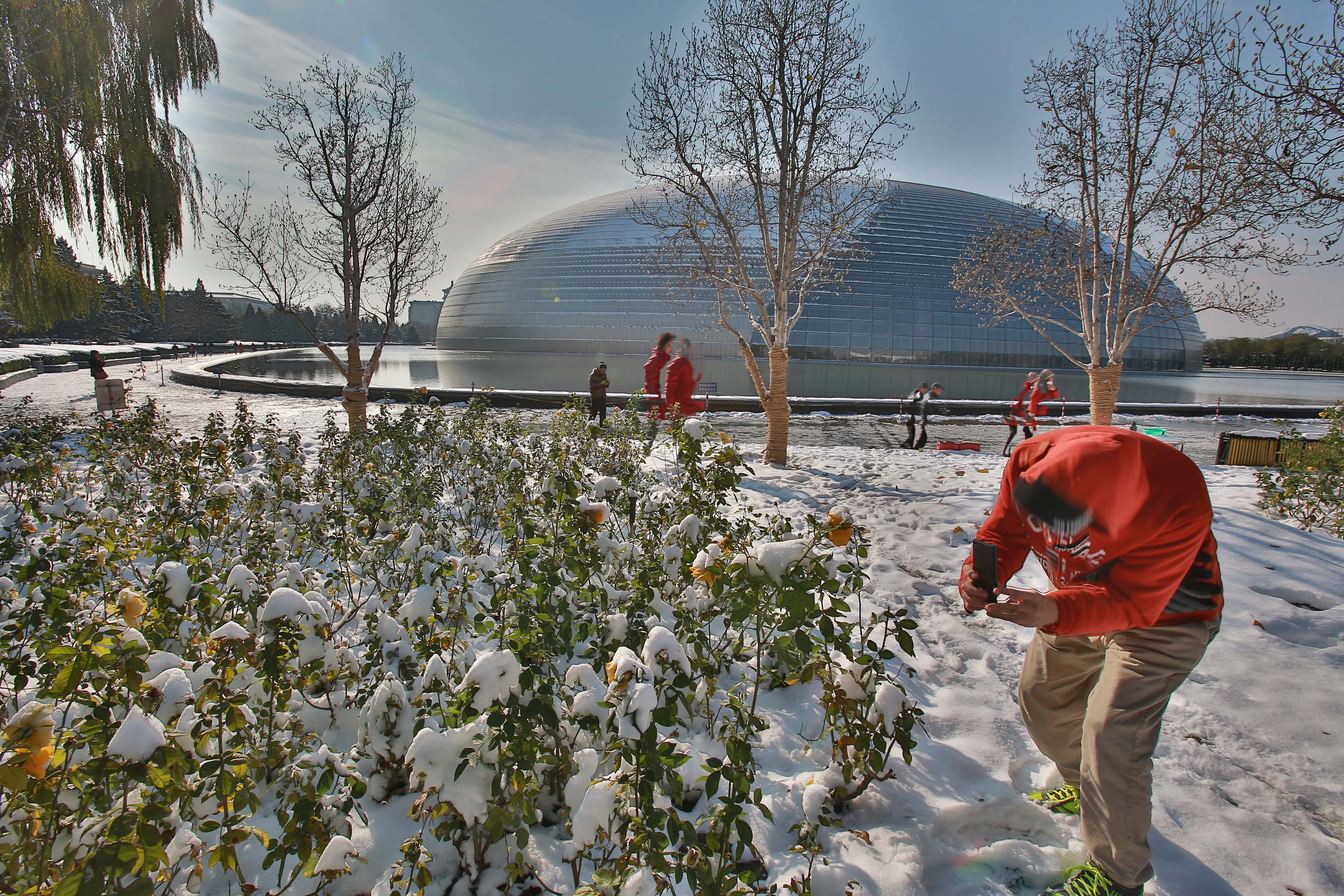 13. Living in a Double-Helix

By building the Agora Garden, architect Vincent Callebaut conveys that if the future will be built vertically, then we will need to implement more space for floral ecosystems in architecture. Twisting like a strand of DNA, the building is fitted with solar energy, rainwater harvesting apparatuses, food composts, and gardens to aid the symbiosis between humans and nature. 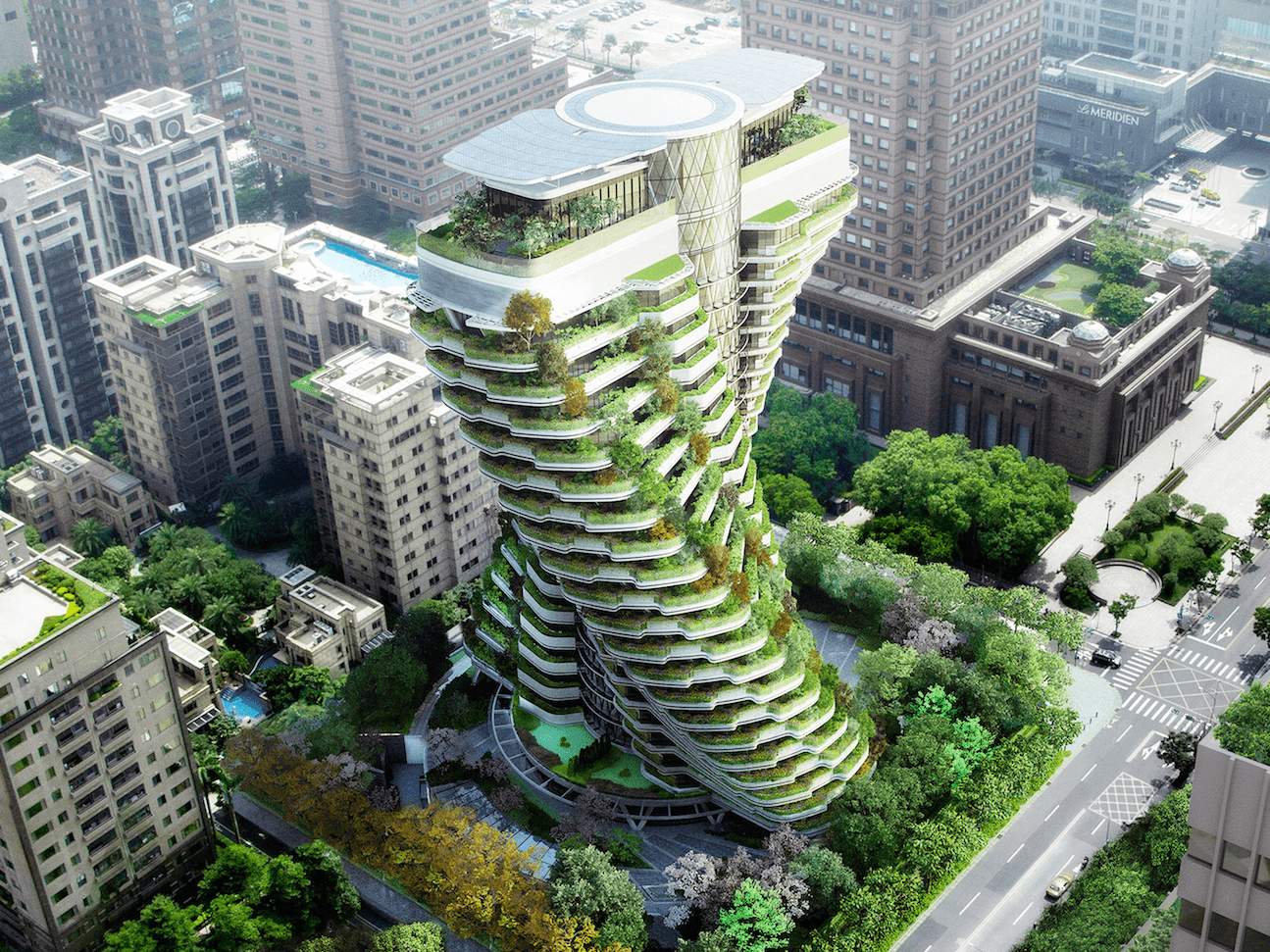 The world’s first high-altitude and the longest glass-bottomed bridge is the Haohan Qiao Bridge in Hunan, China. Not for the faint of heart, it is referred to as the “brave men’s bridge,” as it is situated 180 meters over a massive valley. 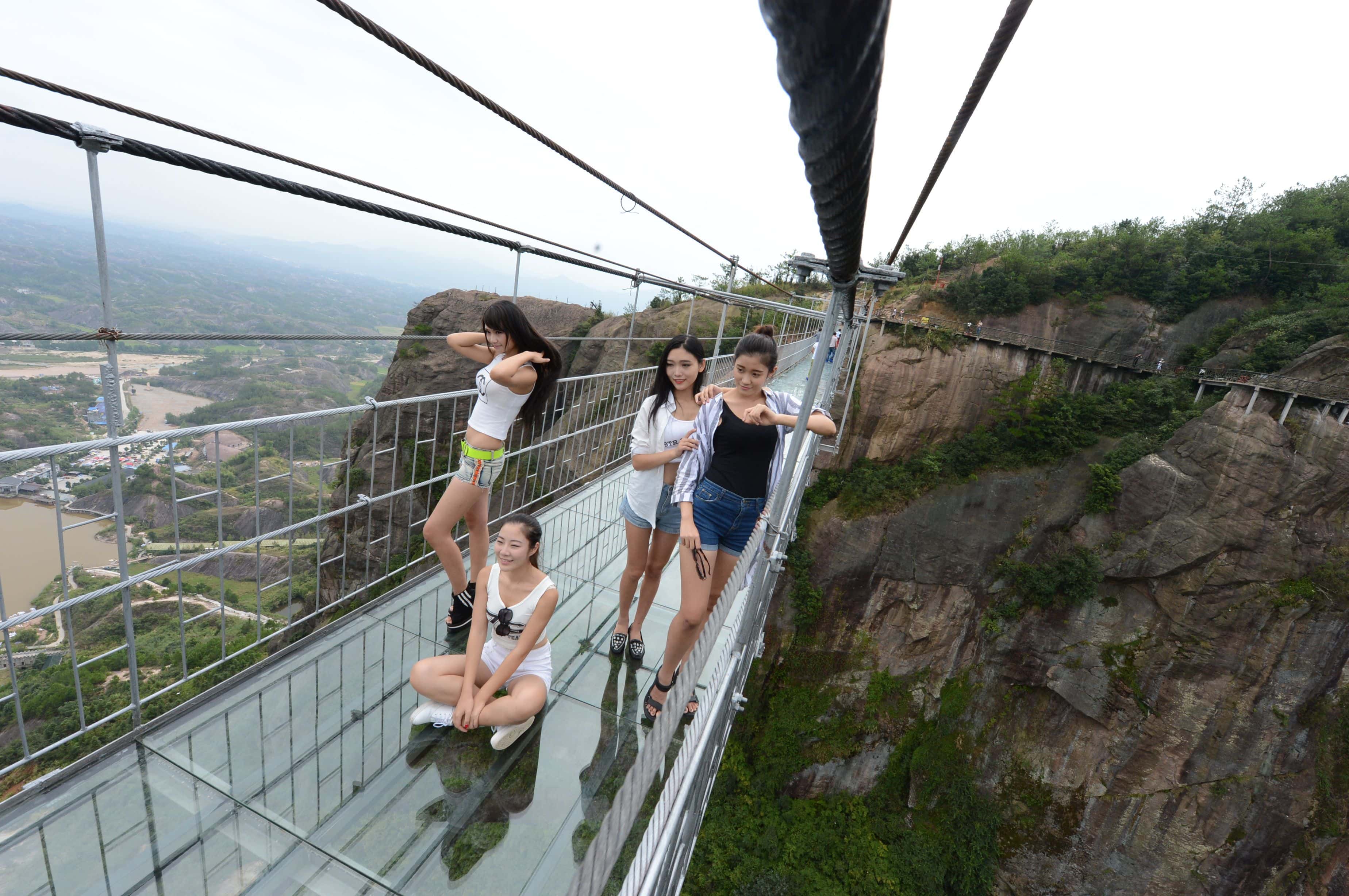 A beautiful example of organic architecture, the Taliesin West in Arizona was built with local organic materials from the desert, including red rocks and redwood, as Frank Lloyd Wright believed Arizona needed its own architecture. Used by Wright as his winter home, he was constantly improvising work on the house. The building also contains Native petroglyphs, which are rocks carved or etched with indigenous designs. 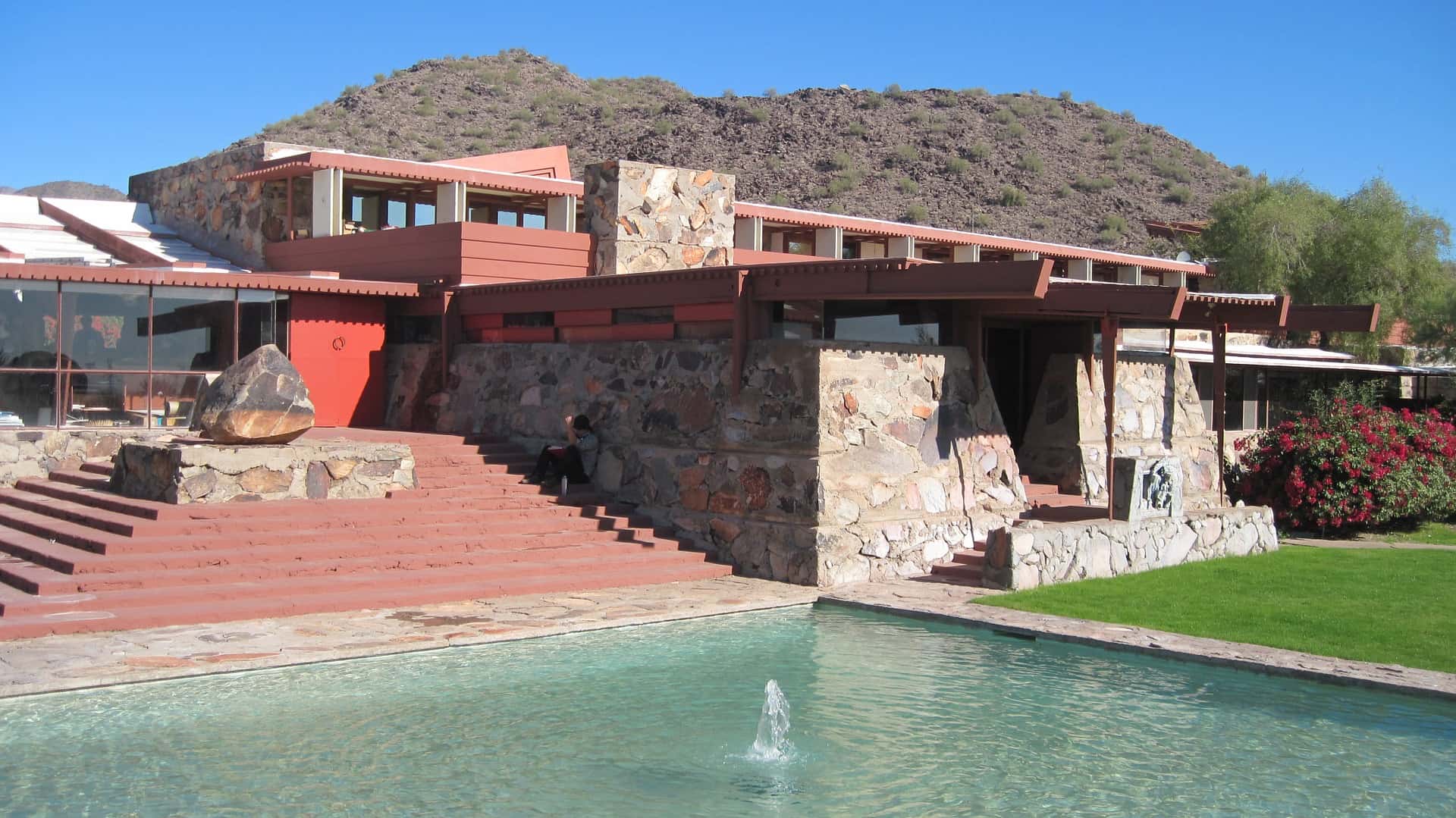 The first federal building to be certified by the U.S Green Building Council for fully meeting the criteria of their Leadership in Energy and Environmental Design, the San Francisco Federal Building is a model of the green movement. Built with slashing greenhouse gases in mind, it is one of the first buildings to be naturally ventilated without air conditioning, while natural light is illuminates 80% of the building. Maybe not so fun for those of us who hate exercise and socializing? The elevators in the building stop every third floor to promote employee circulation and health. 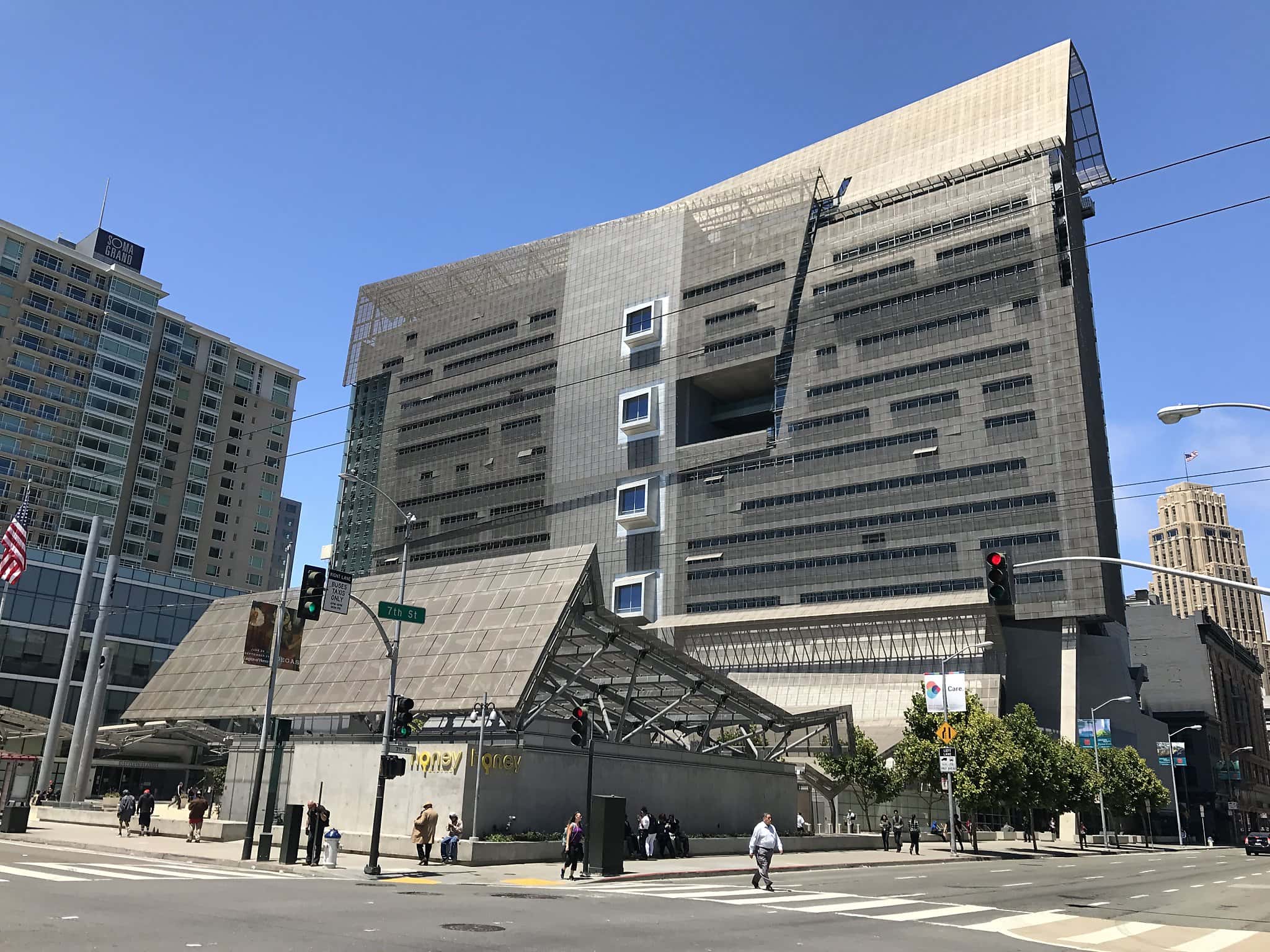 Renowned for its wine, the Rioja region of Spain is littered with wineries. One of the most famous for pushing the boundaries of architecture is the Campo Viejo winery. Built on a breathtaking piece of land, the architect Ignacio Quemada Sáenz-Badillos sought not to “ruin” the natural beauty of the land, so instead of building the winery above ground, he built a 480,000 square-foot complex underground. Not only does this maintain the landscape, but it also aids the regulation of temperature for the winery—an important factor in preserving quality.

You are your environment. With this in mind, the architects behind the Reversible Destiny Lofts of Tokyo, Japan created an innovative apartment complex meant to keep people active and stimulated. Built to have an impressionable impact on those it housed, and vice-versa, some features include bent angles, sunken kitchens, and a lack of interior doors. It steers people towards self-examination and sustains an environment conducive to reinvention. 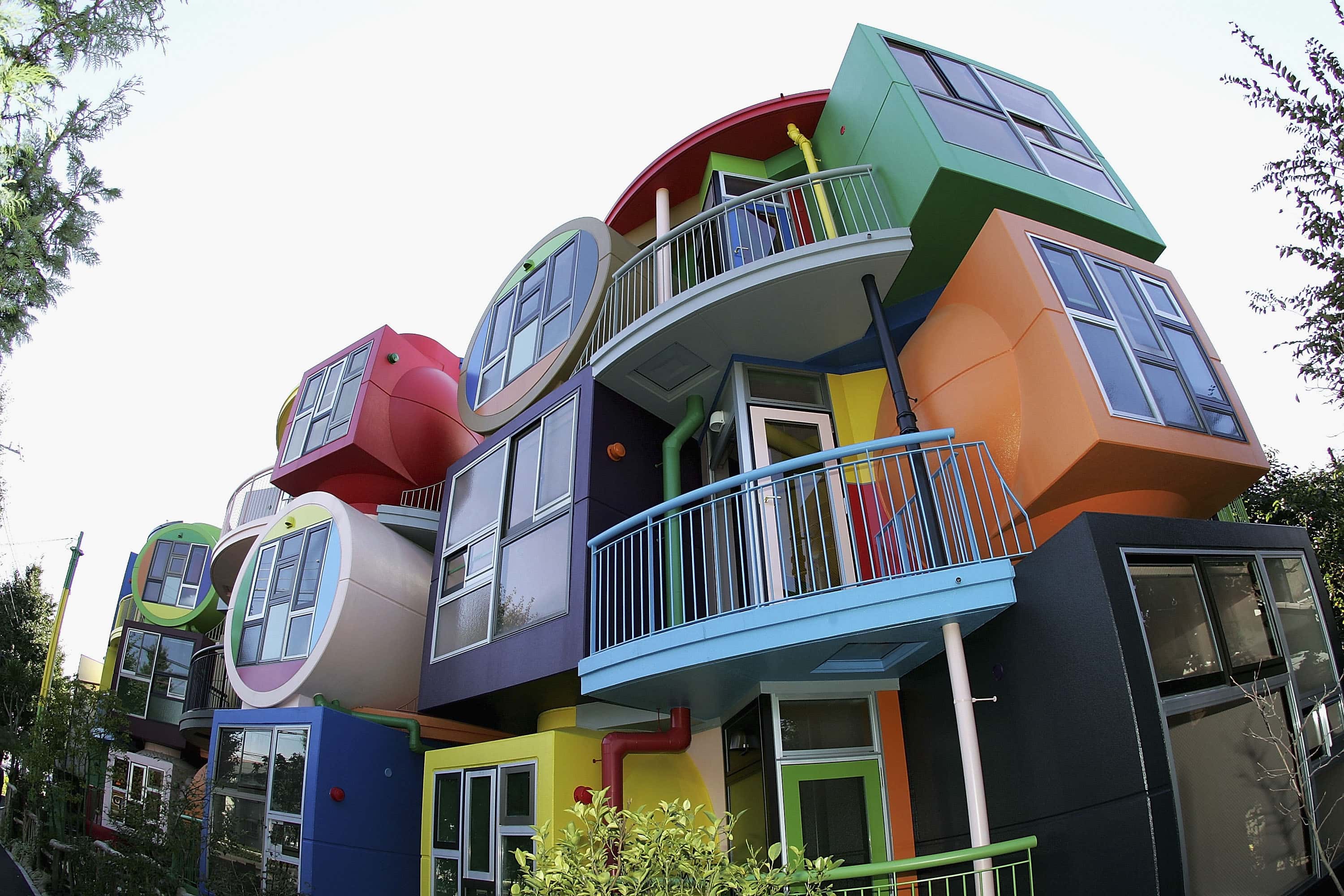 Bridges can be massive pieces of architecture that are seen daily by the people surrounding it, so it only makes sense to consult the community on what it should look like. The architects of the Arthur Ravenel Jr Bridge did just that. The 3rd largest cable bridge in the Western world, it is a true beauty to set eyes on, thanks to the community of Charleston, South Carolina. It also boasts the ability to endure winds of over 300mph, earthquakes of up to 7.4 magnitude, and ship collisions. The cover of Darius Rucker’s Charleston, SC 1966 has the Ravenel Bridge in the background. 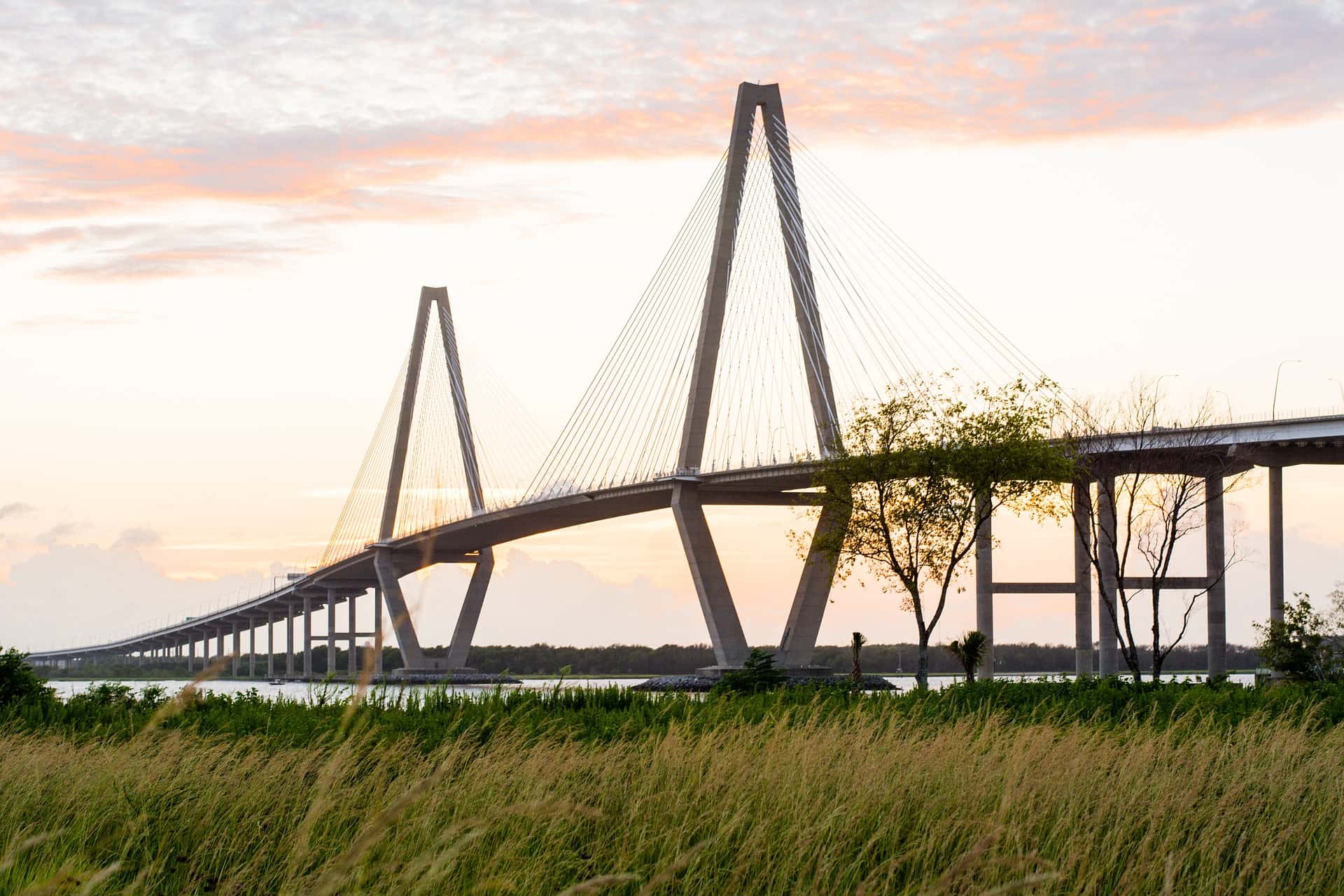 6. City Within a City

What does the future look like? Something like the City of Arts and Sciences in Valencia, Spain. This incredible complex houses a magnificent opera hall, Europe’s largest aquarium, a promenade full of sculptures and exotic plants, a science museum which encourages learning through touch, and a huge eyeball floating above water comprised of a Planetarium, Cinema, and Laserium. Exterior scenes in the 2015 Tomorrowland were filmed at the City. 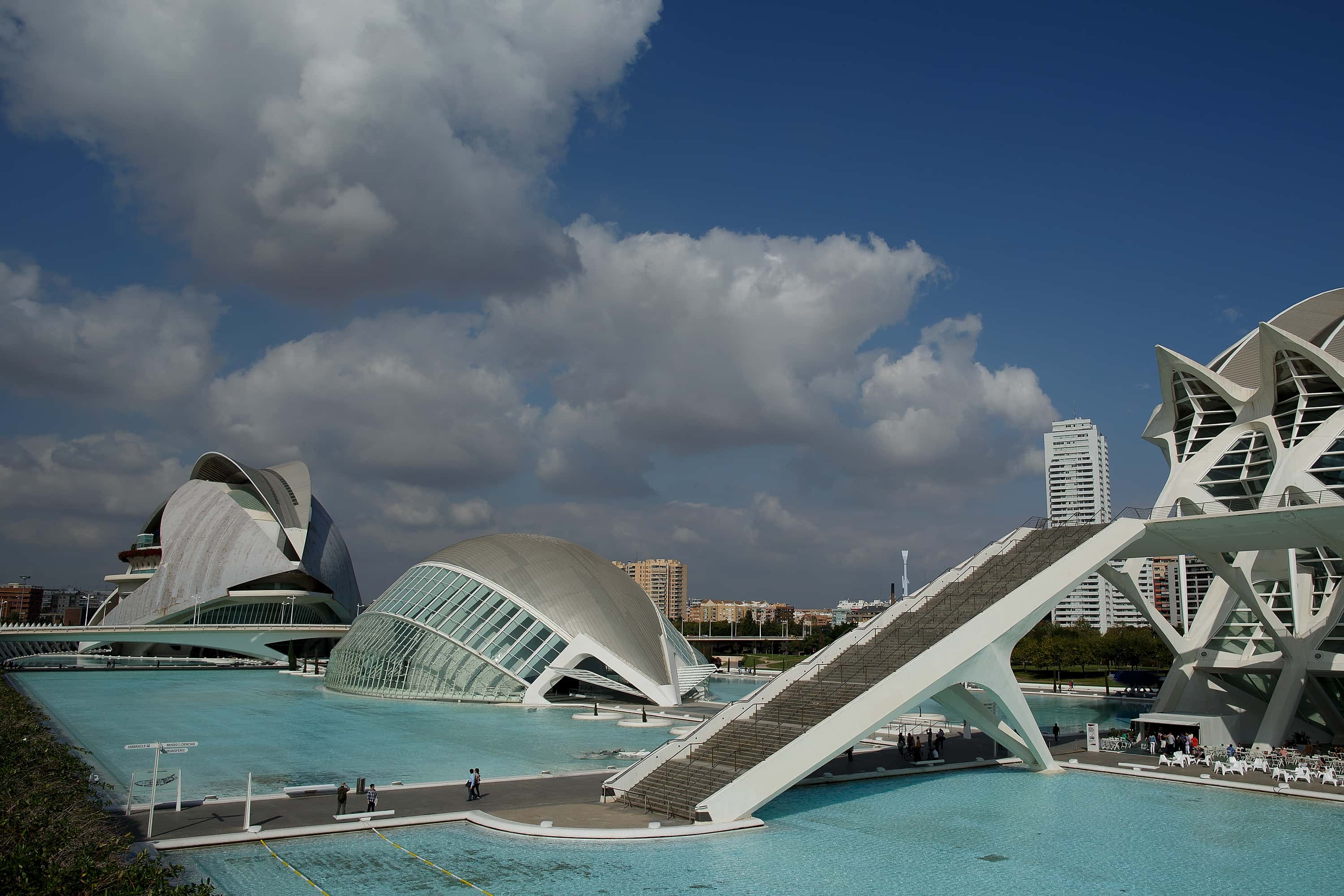 Representing the cultural and economic growth of Malaysia, the Petronas Towers in Kuala Lumpur are the tallest twin towers in the world and also contain the highest two-storey bridge in the world. They are designed with stainless steel and glass panels with properties to filter light and reduce noise, while the glass facades resemble motifs of Islamic art. In 1999, Felix Baumgartner set a world record for BASE jumping off the towers. 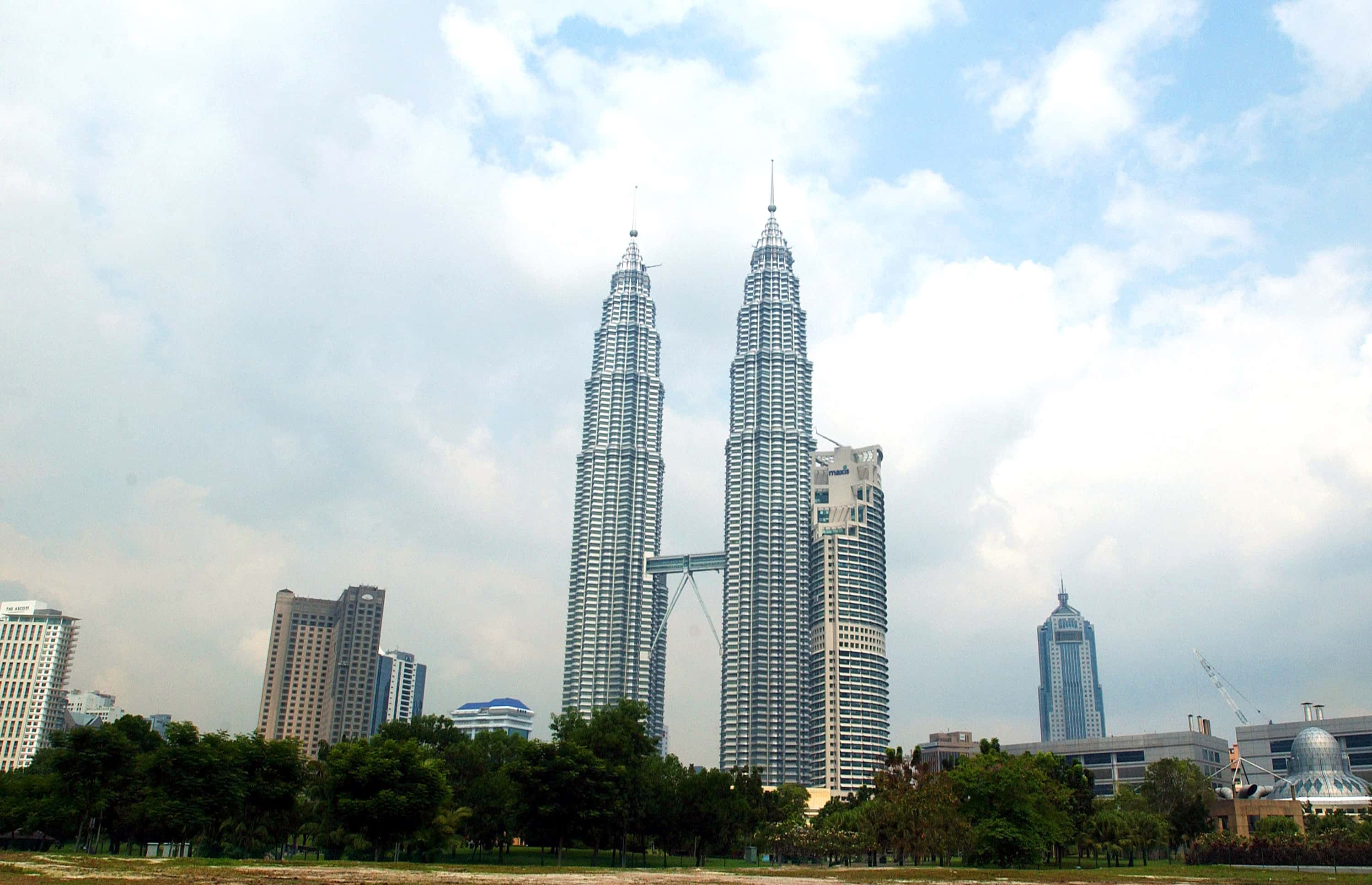 Built as a three-dimensional cranked loop, the CCTV headquarters of Beijing, China is a mind-bending building formed by two leaning towers which merge at the top and bottom in perpendicular shape to create a closed loop. Even though these leaning buildings might seem fragile, they are reinforced to withstand large seismic activity. In February 2009, the building caught fire from fireworks from Lantern Festival day. 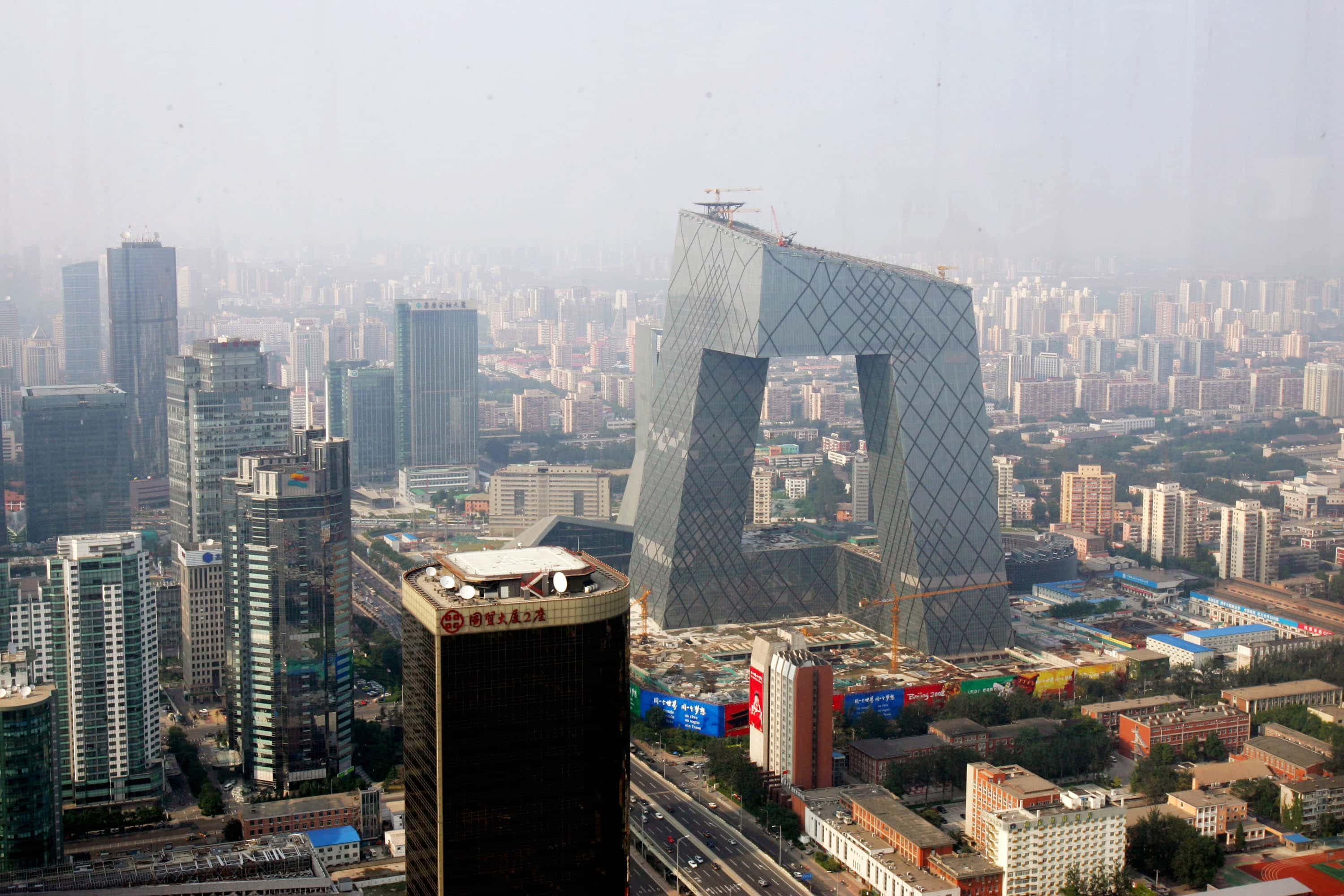 Hailed as one of the most important pieces of contemporary architecture, the Guggenheim Museum Bilbao is universally recognized by all spheres to be a success. A daring building, the museum’s exterior is shaped by random curves designed to capture light at all angles, while the interior is designed to take in the natural surrounding beauty in addition to the works of art inside. The museum houses artists such as Mark Rothko, Willem de Koonig, and Richard Serra. 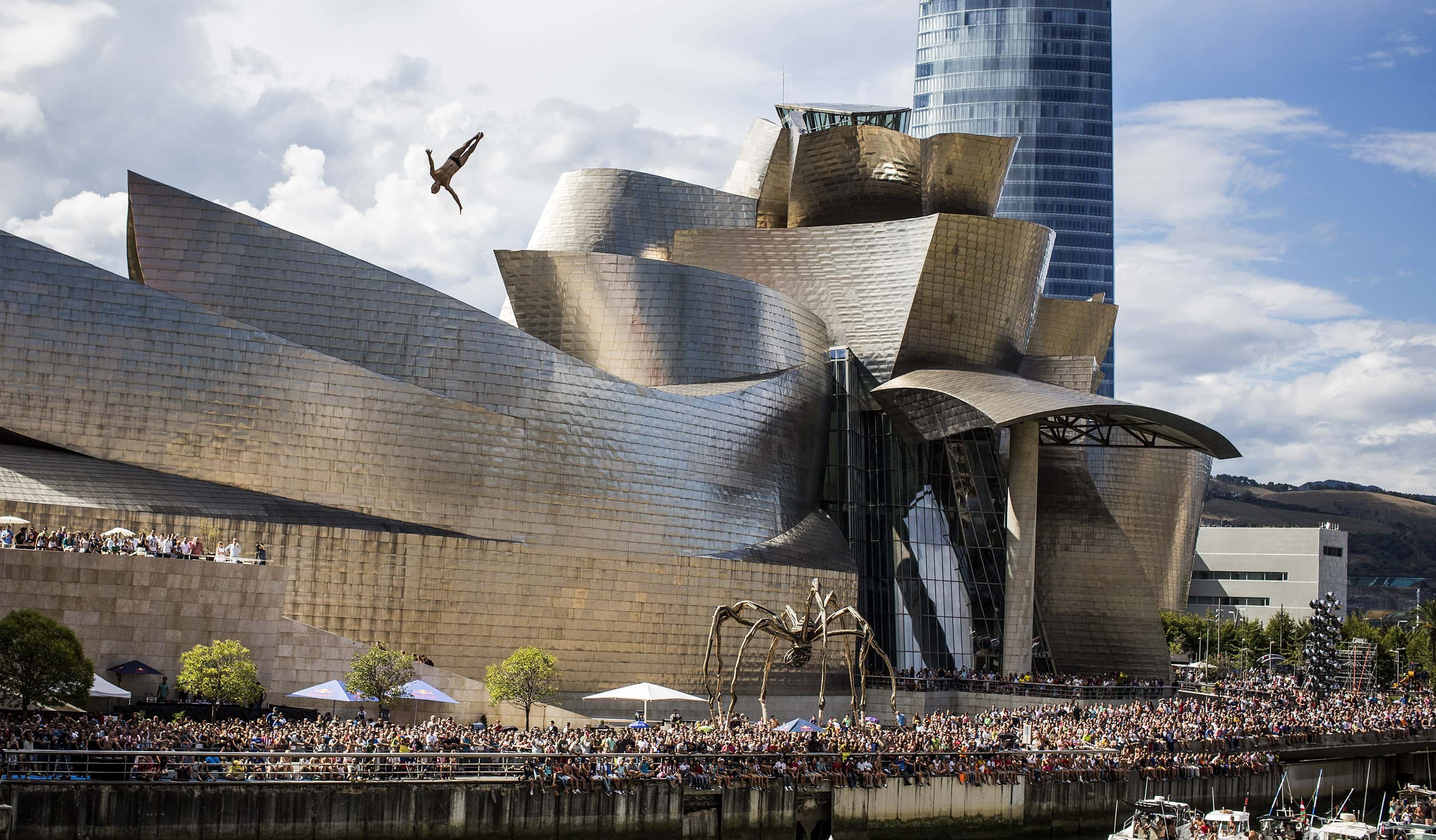 Paradoxically a square prism, yet also shaped like a spiral, the MahaNakhon skyscraper in Bangkok is made to appear as though it is pixelated. 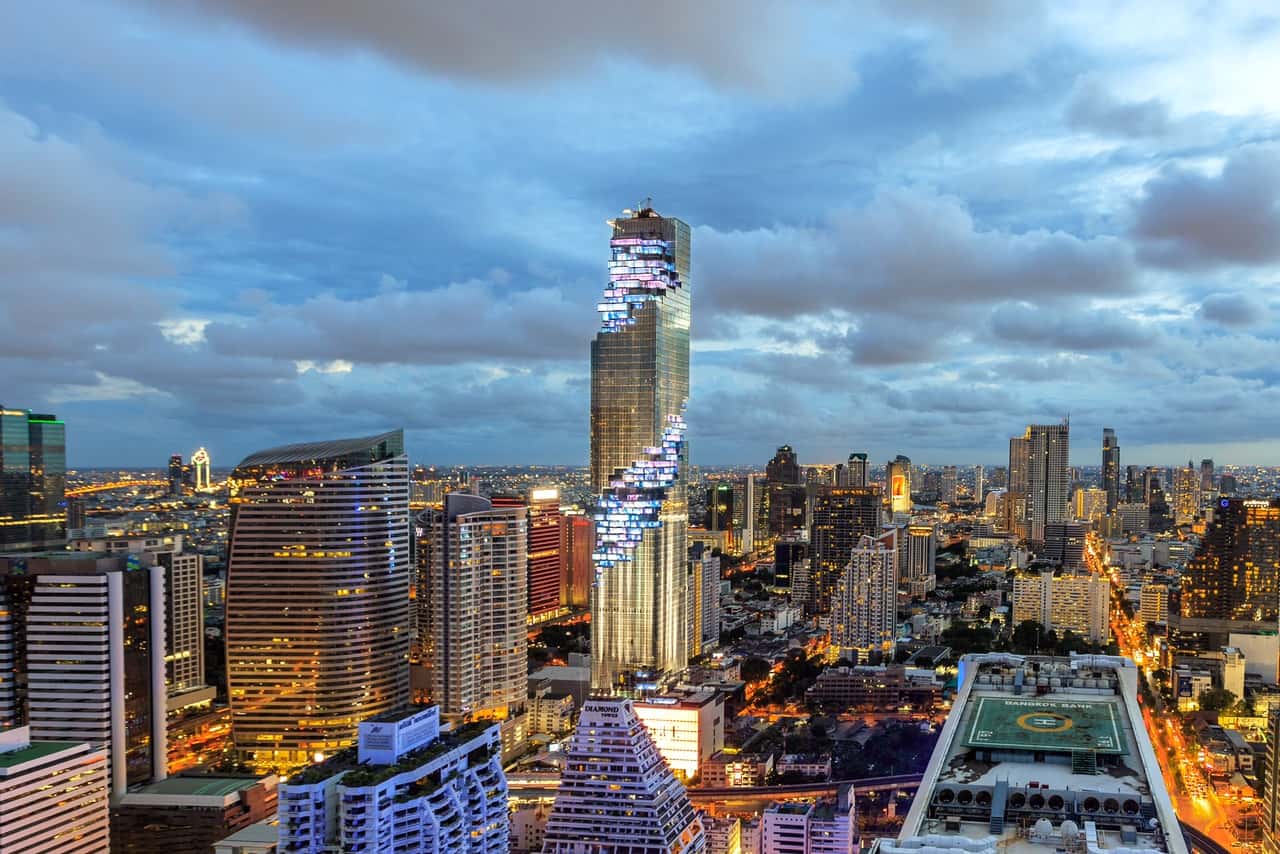 Inaccurately described by people as a barrier against the Mongols, the Great Wall of China was actually built to defend Chinese states from various nomad tribes. Stretching over 5,500 miles, it was also used as border control during the Silk Road era. Though the majority of the existing wall is from the Ming Dynasty of 1368-1644, some of the walls were being built as early as the 7th century BC. 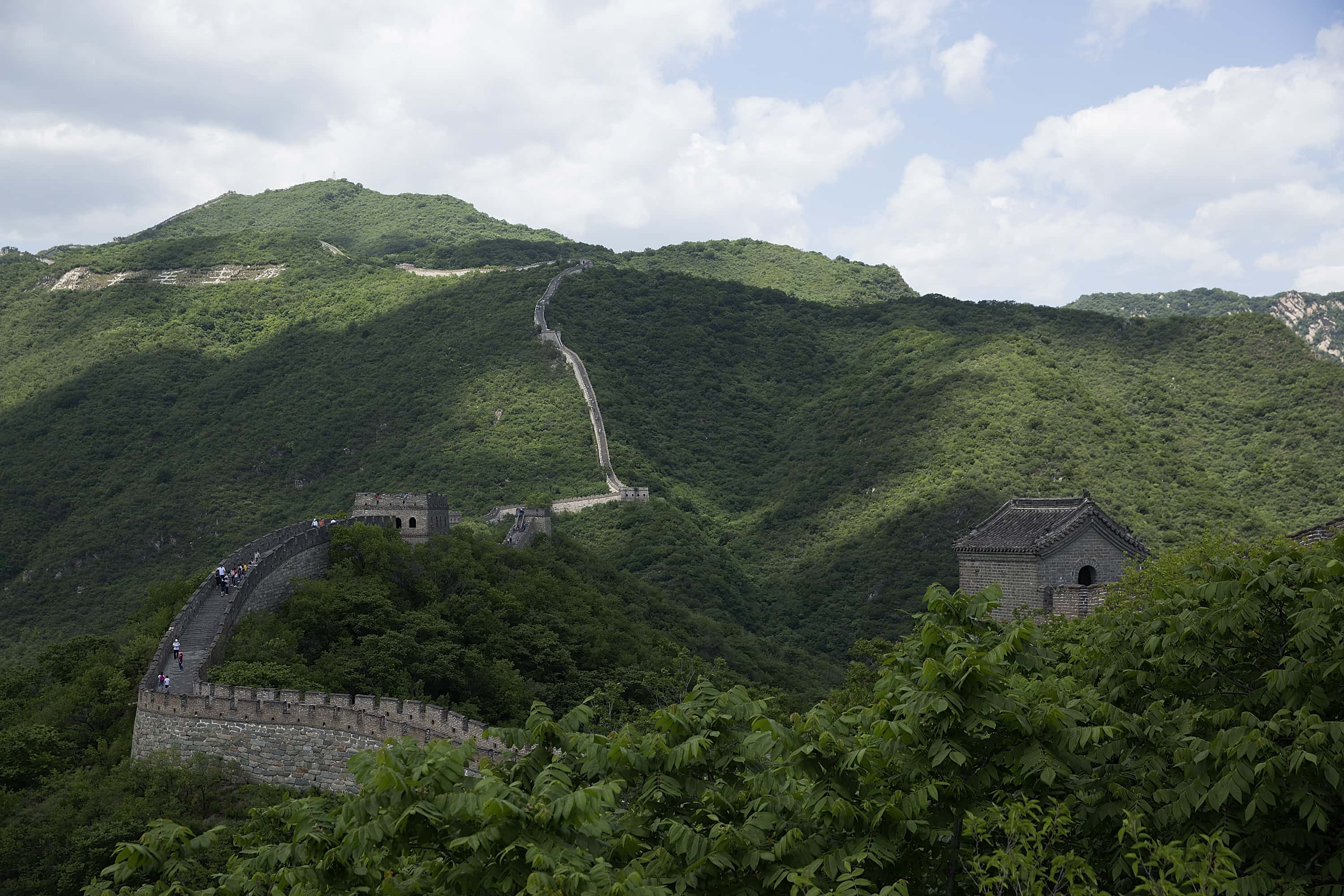