Who doesn’t love a little movie magic? From the Terminator series to Titanic, here are 43 behind-the-scenes facts about some of history’s best-loved films.

The first American movie to show a toilet flushing was Psycho in 1960. The scene was an issue with censors, but ultimately made the cut. It’s shown when Marion flushes an incriminating piece of paper right before the infamous shower scene.

Walt Disney was so disgusted by Psycho that he refused to let Hitchcock film at Disneyland.

James Cameron lived in his car for part of the time that he was writing The Terminator, and he sold the script for a dollar—under the condition that he could direct the film.

O.J. Simpson almost played the Terminator, but James Cameron thought he was too “likeable” and “innocent” to be believable in the role.

39. Come With Me If You Want to Make Bank

In Terminator 2, Arnold Schwarzenegger was paid an average of $21,429 per one word of dialogue.

While shooting Django Unchained, Leonardo DiCaprio, who played an evil slave owner, badly cut his hand when he smashed a glass during a racist rant. He stayed in character, and DiCaprio’s real blood can be seen all over the table.

For much of The Hangover, Ed Helms walks around missing a front tooth. There was no movie magic at work here: Helms has a prosthetic tooth in real life, to replace one that never grew in, that he had removed for the movie.

The reactions in the famous chest-burster scene in Alien are real—the effect was a surprise to all of the actors. When actress Veronica Cartwright was hit by the blood, she passed out.

Steven Spielberg originally conceived of E.T. and Poltergeist—two 1982 films about a suburban family whose lives are changed by a supernatural alien entity in their home—as one movie, called Night Skies.

Spielberg earned a bachelor’s degree from Cal State Long Beach—33 years after dropping out. In 2002, he submitted Schindler’s List as a final project.

Spielberg turned down an offer to direct the Harry Potter films because, as he said, “it’s just like withdrawing a billion dollars and putting it into your personal bank accounts. There’s no challenge in that.”

32. Almost as Good as Magic

More than 500 baby girls have been named Hermione since the first Harry Potter film was released.

30. May the Odds Be Ever in Their Favor

As of 2014, only 29 girls have been named for Katniss in The Hunger Games.

The Wilhelm scream is a sound effect recorded in 1951, and it’s been used in more that 360 films, including Star Wars, Raiders of the Lost Ark, and Titanic.

28. Where No Murderer Has Gone Before

If you went to the movies in October of 1994, you could choose between seeing Jurassic Park, Forrest Gump, Pulp Fiction, and The Shawshank Redemption in theaters.

The velociraptor noises in Jurassic Park were actually the sound of tortoises mating.

The scenes in the film Titanic that are set in 1912 last exactly two hours and 40 minutes—the amount of time it took for the original ship to sink.

24. Just the Tip of the Iceberg

The film’s most famous line—“I’m king of the world!”—was improvised.

Kate Winslet didn’t want to wear a wetsuit under her costume, and as a result caught pneumonia.

22. Kick Off Your Sunday Shoes

Footloose, which tells the story of a town that outlaws dancing, is based on a true story.

21. Coulda Bought a Lot of Lifeboats

It cost more to shoot the movie Titanic than it did to build the actual Titanic.

…And the movie Gravity cost more to shoot than it cost India to run the Mars Orbiter Mission which actually sent a probe to Mars.

In the 2014 Godzilla film, the titular monster is only seen for eight minutes.

18. Back to the Drawing Board

The script for Back to the Future was rejected more than 40 times and by every major studio—some more than once.

25th Anniversary of the trilogy

In an early draft of Back to the Future, the time machine was a refrigerator. The idea was changed because Spielberg was afraid kids would climb into fridges to imitate the film and get stuck.

Again in the original finale of the Back to the Future script,  the time machine was sent back to the present day with a blast harnessed from a nuclear test site.

Movies with time travel, and movies that could potentially misrepresent historical figures, are banned in China for treating “serious history in a frivolous way.”

Also banned from China: Brad Pitt, for his performance in the 1997 movie Seven Years in Tibet. He was only legally allowed to re-enter the country in 2016.

12. Mr. Green in the Hall With the Revolver

When the film Clue was shown in theaters in 1985, each screening location was given one of three possible endings.

Tom Cruise, Nicolas Cage, Johnny Depp, Brad Pitt, Val Kilmer, and Will Smith were all considered for the role of Neo in The Matrix.

The Matrix’s directors, the Wachowskis, have said that, if given Neo’s choice, they would both take the blue pill (the one that allows you to continue believing the illusion).

9. Welcome to the Desert of the Real

According to a 2015 study of Oscar acceptance speeches, Steven Spielberg, James Cameron, and Peter Jackson have all been thanked more than God.

7. Where No One Can Hear You Scream

NASA keeps a movie library on the International Space Station. Among the films included are Apollo 13, Around the World in 80 Days, and Armageddon.

The Kazakh title character in Borat is actually speaking Hebrew. Because of this, the film was a huge hit in Israel.

5. They Found Love in a Post-Apocalyptic Place

The stunt doubles for Tom Hardy and Charlize Theron in Mad Max: Fury Road fell in love and got married.

4. Lord of the Body Count

The Lord of the Rings film Return of the King has the most deaths of any film: 836 characters were killed.

John Hurt (not Sean Bean, to the surprise of many) holds the record for most on-screen deaths: 43. His cinematic deaths include being consumed by a magic pot (in The Black Cauldron) and interplanetary collision (Melancholia).

One of the final days of the Titanic shoot, the lobster chowder was spiked with PCP, and 80 crew members got sick. To commemorate the event, a t-shirt was made with an image of the ship going down in a bowl of chowder.

Donald Trump was the inspiration for the casino-mogul character—and Marty’s nemesis—Biff Tannen in the Back to the Future trilogy. In the future scenes set in 2015 in Part II, Biff’s political influence fills Hill Valley with crime and corruption. 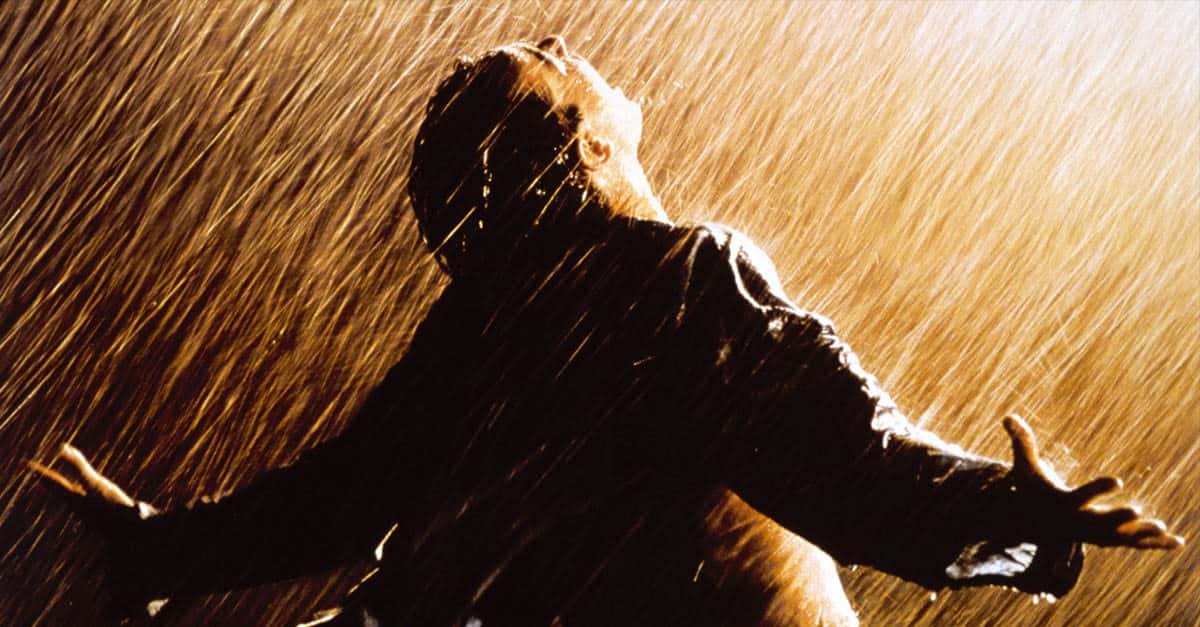 Life-Affirming Facts About The Shawshank Redemption