The Real Memoirs Of A Geisha: The Life Of Mineko Iwasaki

The Real Memoirs Of A Geisha: The Life Of Mineko Iwasaki

In 1997, Arthur Golden published Memoirs of a Geisha, a best-selling novel that follows Chiyo Sakamoto as she navigates the life of a Kyoto geisha in the years surrounding World War II. Golden’s book gave insight into the cloistered world of the geisha, and in 2005, it was adapted into a lush, Academy Award-winning film—though the movie garnered criticism for casting the Chinese actress Ziyi Zhang in the distinctly Japanese role of Chiyo.

But the original novel has an even more controversial history—and a dark secret.

Much of the purportedly fictional Memoirs is actually based on the life of Mineko Iwasaki, Japan’s most famous geisha in the 1960s and 70s. As the biggest name in one of the most mysterious vocations in history, hers is a story full of intrigue, turmoil, and drama. It’s also a story of betrayal.

Iwasaki was born as Masako Tanaka in 1949. At the tender age of five, she was sent away from home to study Japanese dance at the Iwasaki geisha house in the exclusive Gion district of Kyoto, which is the most elite of Kyoto’s hanamachi or “flower towns” that house geisha. The house matriarch, Madame Oima, must have seen something special in the young girl: she was made heir of the house, and took up Oima’s surname, Iwasaki. But this was only the beginning of Mineko’s illustrious career.

Like most Kyoto geisha, at the age of 15 Iwasaki began her training as a maiko, or an apprentice geisha. These young girls are actually what Westerners usually think of when they imagine geisha; their kimonos are more elaborate than their mature counterparts, and they often wear their hair in the distinctive Nihongami style. As a fledgling geisha, Iwasaki learned how to pour tea, dance, and make flirtatious conversation, all with a deliberate yet graceful air. By the time she was 16—and before she was even made a full geisha, or geiko—she was the most popular geisha in Japan.

On her 21st birthday, Iwasaki was made a geisha proper, and the coming years were a whir of parties and famous names; in her autobiography, she counts Queen Elizabeth II and Prince Charles among her clients. But she found the monarch “frosty” and “rude,” and said the Queen “never laid a chopstick on the food that had been so painstakingly prepared for her.” As for the Queen’s son, he committed the gauche error of signing her fan, which Iwasaki did not look on as a favor. “I told him he could keep it,” she said, “I didn’t want it anymore.”

But though Iwasaki lived a life of glamour and flirtation during her time as a geisha, her work did not include bedroom romps, royal or otherwise. Contrary to many white fantasies, including Golden’s depiction of geisha in Memoirs, Iwasaki was not an escort. In the 18th century, geisha were specifically developed as chaste, entertainment-only alternatives to Japan’s oiran courtesans, who were designated sex workers. In fact, when a saucy Henry Kissinger tried to feel her up, Iwasaki recalled, “we told him to desist.”

Of course, many geisha throughout history have certainly engaged in sexual favors with their clients, and maintaining strict definitions in such ambiguous entertainment work is impossible. But Iwasaki categorically denies any ritualized sexual aspect to geisha life, especially the scene in Memoirs of a Geisha where Chiyo’s virginity is up for auction; this practice, called mizuage, was strictly reserved for oiran. For the most part, as K.G. Henshall puts it, the geisha’s clients were men “amused by the illusion of that which is never to be.”

Getting out of the Game

But Iwasaki’s renown couldn’t last forever. Her constant work and high standards ran her into the ground, and she once suffered from a life-threatening kidney condition. She also felt increasingly dissatisfied with the opportunities available to geisha, and with her profession’s strict adherence to tradition, especially when it came to keeping geisha and other women uneducated.

So, at the height of her popularity, she quit.

Her early retirement (she was only 29 years old at the time) shocked her community, and no less than 70 high-powered geishas followed suit, turning in their kimonos and delicate accoutrements. As Iwasaki later said, “it was a life that I found too constrictive to continue.” Tragically, it was all in vain: the geisha community closed rank, and very little changed for the painted women.

Despite this disappointment, Iwasaki moved on with her life. She became a more modern artist, married, and even had a child. But perhaps the bitterness at her past life could not be entirely leeched from her veins: When writer Arthur Golden came knocking at her door, asking her to divulge the secrets of the geisha for his novel, she answered. Geishas are under an oath of silence to keep the details of their lives private, but Iwasaki flouted tradition once more and opened up to Golden, turning her back on that world forever.

Golden repaid her in betrayal.

Iwasaki demanded to be made anonymous, but Golden carelessly named her as one of his sources in his acknowledgments. Moreover, though Golden conducted interviews with several geisha as research for his book, his finished story disproportionately resembled Iwasaki’s life. And perhaps most damning of all, Golden twisted happy memories and positive events from Iwasaki’s life into tortured, traumatic experiences for the sake of drama—when he wasn’t adding flagrantly false information like the mizuage virginity ritual.

Two Sides to Every Story

To be sure, fiction has a certain creative license, but Iwasaki believes that Memoirs of a Geisha doesn’t merely use her as inspiration; it is her—only darker, distorted, and fashioned into a tool of male fantasy. In response, she sued Golden for both breach of contract and defamation of character in 2001, and the case was settled out of court two years later. But she wasn’t done yet: Memoirs of a Geisha spurred Iwasaki to tell her own story, in her own words, and in 2002 she released her autobiography, Geisha: A Life.

To be a geisha is to enter into a world founded on firm tradition and harsh discipline, yet it is also a world overlaid with pleasure, luxury, and more than a little seduction. “Geisha” is thus a difficult existence to negotiate, and as Iwasaki recalls, “I [lived] in a world apart, a special realm whose mission and identity depended on preserving the time-honored traditions of the past.” Her identity as a geisha was thus nuanced and complex—and in the end, it was her identity to reveal. 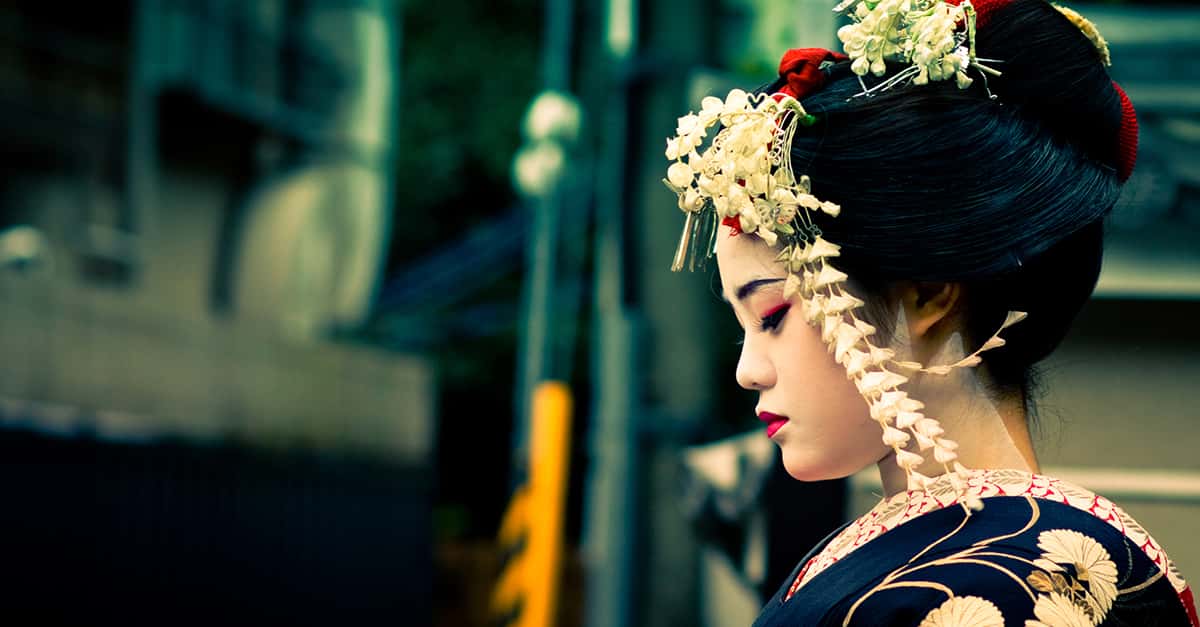